The 2021 Porsche 911 Turbo will be available in coupe and convertible configurations.

Those are very respectable numbers and even more impressive when you realize this is a six-cylinder car with the engine in the “wrong” place.

Other technical highlights include the symmetrical VTG turbochargers with electrically-controlled bypass valves. The charge air cooling system has also been redesigned and, along with the use of piezo fuel injectors, improves throttle response, torque delivery, and the engine’s free-revving nature. 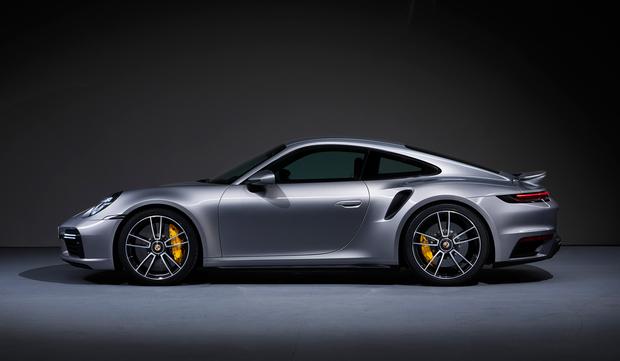 That six-cylinder plant is mated to a standard eight-speed PDK transmission with Turbo-specific internals and calibration. There’s no mention of a manual, but that might change in the future.

The chassis has been tweaked for higher performance with the addition of 1.65 inches of front track width and new 20-inch wheels with 255/35 tires in front. At the rear, the new 911 Turbo receives 0.39 inches of added rear track width to go with the massive 315/30 tires on 21-inch wheels. Rear-axle steering is also standard.

The chassis upgrades and tires were copped from the Turbo S, as was the Porsche Traction Management active all-wheel drive system. Porsche Dynamic Chassis Control (PDCC), which uses active anti-roll stabilization, is available for the 911 Turbo.

The brakes, a lifelong Porsche hallmark, are just as impressive. Red fixed calipers clamp down on thick cast-iron front rotors, 408 millimeters in diameter and 36 millimeters thick. The rear axle features 380-millimeter brake rotors that are 30 millimeters thick. Those are the stock rotors. You want more, then check the box for the Porsche Ceramic Composite Brakes that come with ten piston front calipers.

Like the 2021 Porsche 911 Turbo S, the new 911 Turbo is 1.8 inches wider at the front fenders. The hood, which is actually the front luggage compartment lid on a 911, is new for 2021 and features a recess in the center to underline the car’s performance-focused character, according to Porsche.

The rear bodywork is also wider, gaining 0.78 inches over the previous generation 911 Turbo. And there are new aero bits on the 2021 911 Turbo such as adaptive cooling air flaps at the front, a larger active front spoiler, and the increased rear spoiler size.

Air intakes on the rear side panels draw in cooling air for the charge coolers that are now positioned directly in the air stream under the rear decklid. The continuous light bar with LED taillights (a newish trademark for Porsches) is there too, as well as a new louvered rear decklid grille with silver trim strips.

The interior of the 2021 911 Turbo features the Porsche Advanced Cockpit and Direct Touch Control systems with a 10.9-inch center screen. The list of standard equipment is about as thick as the owner’s manual, but highlights include electrically-adjustable 14-way seats, a GT Sport steering wheel with shift paddles, a Bose stereo, and Porsche’s Sport Chrono package.