Speed Duel records the dangerous world of land racing in the 1960s.

They cheated death and pushed every limit possible as they battled for the top records.

Images taken from Speed Duel: The Inside Story of the Land Speed Record in the Sixties by Samuel Hawley, with permission from Firefly Books Ltd.

Samuel Hawley has written a book that belongs in any gearhead’s collection. Speed Duel: The Inside Story of the Land Speed Record in the Sixties is about land speed racing at a time when things became faster and faster, and deadlier and deadlier, by the week. Speed Duel also follows the two out-sized personalities that navigated this world in a most tumultuous time.

The 1983 movie, The Right Stuff opened with this narration: “There was a demon that lived in the air. They said whoever challenged him would die. And men came to the High Desert in California to ride it. They were called test pilots. And no one knew their names.”

They might as well have been talking about land speed record (LSR) attempts in the 1960s. LSR racing has always been exceedingly perilous work, but in the 60s it went from perilous to nearly suicidal. Up until then, it had been, although very dangerous, a relatively straightforward affair: build a chassis, get the biggest engine you could, wrap the whole thing in a swoopy-aerodynamic body, and fare thee well.

By the 60s a perfect storm arrived. First, there was a bumper crop of fearless gearheads left over from World War II. Guys that were just itching for more and more action, whatever that action may be. Second, there was a burgeoning knowledge of making things go faster (again, largely due to the war). And lastly, there came jet engines. To say jets revolutionized the LSR world carried about the same weight as saying it revolutionized the fighter plane world.

As these things often do, who was going to be “king of the hill” and the “fastest man alive” came down to two guys: Craig Breedlove and Art Arfons. Speed Duel: The Inside Story of the Land Speed Record in the Sixties tells their story in full detail. 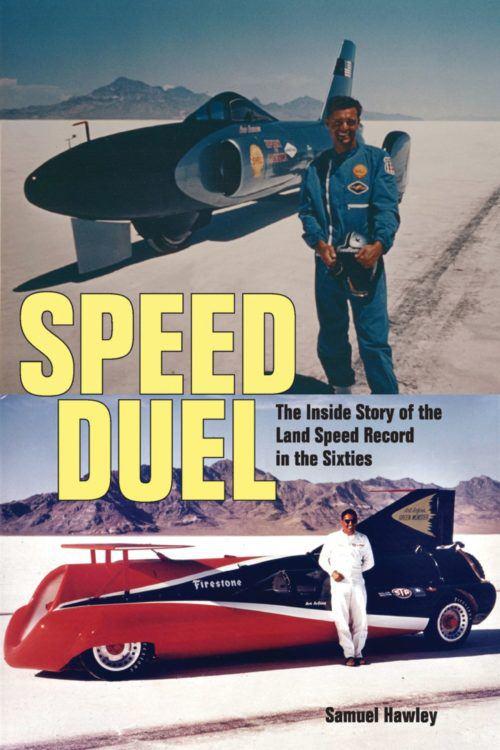 Those blessed fools (they both lived, somehow) were the two fellows most consistently trying for the top step on the podium. Breedlove and Arfons were sort of like The Beatles and The Rolling Stones. Sure, there were other bands around in the 60s, and some of them were very good indeed, but when it came down to who got the press; who sold the most records; who was at The Top; people never said Herman’s Hermits were in the running.

Speed Duel was written by Samuel Hawley and clocks in at a healthy 360 pages (including notes and an index). It’s softbound, about the size of a laptop screen, with all its photos clumped together in two big groups, for those who like to blow through the copy in three big gulps.

It’s smartly written and moves along at a good clip. And although Breedlove and Arfons ar

e the linchpins of the book, Hawley does cover the other racers who wanted to be the fastest man alive. Before this, land speed records were, somehow, the realm of rich British guys. Hawley gives them their due, but really this is a two man show.

Hollywood thought Ford v Ferrari was a natural movie to make. One of our heroes is a movie star, good looking southern California hot-rodder with an unquenchable desire for more and more speed. And the other guy was a tough-as-nails war vet from the American heartland.

Breedlove (sheesh, even his name is Hollywood) was all slick and methodical, and leveraged the current version of the American Dream to gain access to airplane designers, jet engine specialists, tire manufacturers, and money. Lots and lots of those green back dollars!

Ohio native Arfons was a mechanic and junk dealer who happened upon a “surplus” General Electric J79 jet engine from an F-104 fighter plane. To make sure it ran right, Arfons chained it to a tree in his back yard, fired it up, red lined the throttle, cut in the afterburner, and summarily incinerated his neighbor’s chicken coop.

Hawley also (quite nicely) details the soap opera aspects of trying to beat the other guy while simultaneously cheating death. Art and his brother Walt had some sort of falling out, so Walt went and built different jet and rocket cars riding on Goodyear tires (Art was a Goodyear man). Breedlove had a song written about him by The Beach Boys. Arfons had a tire explode at over 400 mph and lived. Breedlove lost a drag chute at might-as-well-have-been the same speed, crashed into salt pond, and nearly drowned.

How ironic would it be to drown in the middle of a desert?

Examining the wreckage the next day. Photo: Bob Davids.

It’s not boring, it’s not rote, and it’s not all statistics. There’s enough engineering here to tell you what they were up against, but there’s also enough personal and emotive stuff to tell you about the people involved. And I can say, personally, that in all my life and work around cars and racing, I have rarely found people more interesting than Art Arfons and Craig Breedlove.

All the more reason why Speed Duel: The Inside Story of the Land Speed Record in the Sixties is now on my coffee table.

Samuel Hawley was born and raised in Korea, the son of missionary parents. After obtaining a bachelor's and master's degree in history from Queen's University in Kingston, Ontario, he and his wife returned to East Asia as teachers for nearly two decades, first in Japan and then in South Korea, and ended up as an associate professor of English at Yonsei University in Seoul in 2007. Holly wrote about 16th-century East Asian history, 19th-century relations between South Korea and the United States, Olympic sprinting, sumo, land racing, and the circus elephant Topsey, who died in an electrocution in 1903.