Enjoy this Lamborghini Urraco photo gallery! This car is rare and beautiful!

The Lamborghini Urraco is a beautiful 50-year-old car.

When this 2+2 coupe debuted at the October 1970 Turin Motor Show, critics hailed its technical innovations. Engineer Paolo Stanzani, the father of the Urraco and Lamborghini’s Chief Technical Officer at that time, deserved a lot of the credit. And the style was pretty sleek, too. The angular body was 4.25 meters (just under 14 feet) long, and the Urraco’s interior was unique to the time, with things like a “dished” steering wheel.

Designer Marcello Gandini did the styling for the Urraco project, then principal designer for Carrozzeria Bertone.

Never heard of this classic? Perhaps that’s because the automaker only produced 776 of these cars between 1970 and 1979. The Urraco’s technical advancements made way for the Gallardo and Huracán. That’s plenty of reason for Lamborghini to celebrate this trendsetter’s 50th anniversary. But there is a lot more that made the Lamborghini Urraco a standout. 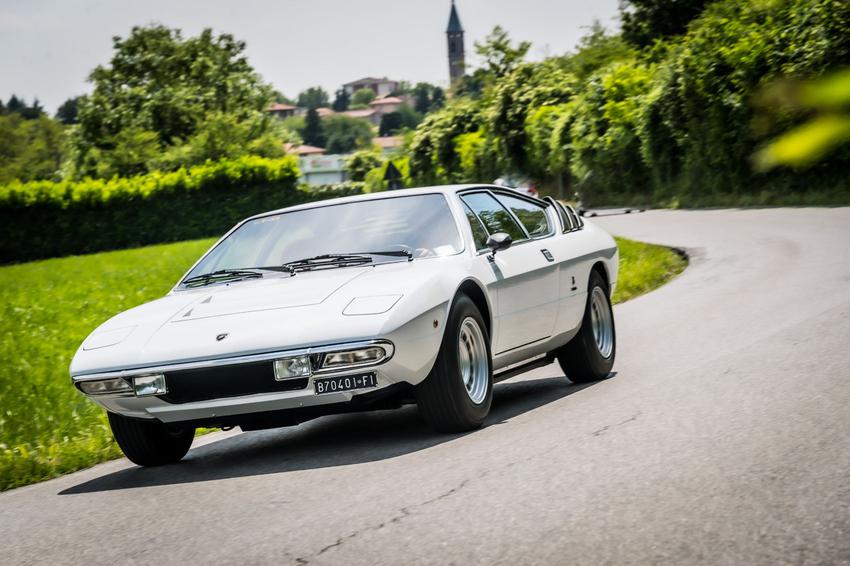 For starters, it boasted a mid-mounted V8 rear engine and independent suspension, with a MacPherson strut system for both the front and rear. That was the first time a production car had that strut system. There were plenty of other highlights, including a 2.5-liter V8 delivering 220 horsepower at 7,800 rpm and a top speed of 245 km/h (153 mph). Plus, the Urraco featured th

e double novelty of an eight-cylinder engine and distribution with a single overhead camshaft per bank.

Lamborghini used a “Heron chamber” engine head for the Urraco with a flat inner part and the combustion chamber in a depression at the top of the piston. This made it possible for Lamborghini to use a higher compression ratio without increasing the cost. Another novelty? The four Weber double-body 40 IDF1 type carburetors.

The Lamborghini Urraco’s interior was unique at the time in terms of the dashboard, the position of the instruments and switchgear, and the “dished” steering wheel. Photo: Automobili Lamborghini.

The car’s production was another innovation, planned from the early stages of the project to be much less “artisanal” than other Lamborghini models. Ferruccio Lamborghini led the creation of the Urraco as a way to make Lamborghini more accessible to a broader, albeit limited, public.

The Lamborghini Urraco certainly set the pace for future models. What is your favorite Lamborghini? Let us know on Twitter.