Genesis Concept cars
ZTSG 14/12/2021 Coupe 396
Wow! This is the new Genesis X concept car, and to say that it is an exterior would be a huge understatement. It's not just a gorgeous design study, at least not collected during our recent global deb...

Wow! This is the new Genesis X concept car, and to say that it is an exterior would be a huge understatement. It's not just a gorgeous design study, at least not collected during our recent global debut in Los Angeles. The Genesis X concept may (may be) the next benchmark.

Getting On The Map

Doesn’t Remind Me of Anything

Getting On The Map

Every so often, a “new” car company fires something like the Genesis X Concept off. The world takes notice, and that’s it: that car company is no longer the new kid at school. I remember this from the 60s and 70s. As a car industry, the Japanese plugged along with solid, goofy little offerings like the Toyopet. The Big Three and the Europeans would condescend and pat them on the head. “There, there. Aren’t you cute!”

Then boom! Toyota dropped the 2000 GT and Datsun dropped the 240Z. In more recent times, it’s Nissan giving us the GT-R, Acura the NSX, and Mazda the MX-5. Add to that the rise of brands like Lexus, which proved the Europeans were not the only ones who could produce sporty luxury cars. And people have Noticed.

Fast forward to today and to South Korea. Oh sure, as nice as they are, Hyundai and Kia are a derivative of sorts, aren’t they? Not very original. Sometimes, they seem like a knock-off of what Japanese brands have tried to do in the U.S. for years. And literally the same stuff I heard pundits saying about Japanese cars back in the day, they’re saying about South Korean cars today. Or they were.

They were until cars like the Genesis G70 and G90 and the newly-redesigned Hyundai Sonata came charging out of left field. And Kia is definitely not the same brand they were a decade ago. And now, along comes the Genesis X Concept.

Doesn’t Remind Me of Anything

Maybe there’s some Aston Martin in the grille, but that’s a definite maybe. The design language exclusively belongs to this car. There are no lines cribbed from Italian studios or door handle ideas nicked from Ford. There are no goofy doors or sideways-facing seats or any of that fluff you see in concept cars. Although striking and unique, the outside looks like Hyundai has the stamping dies and panel molds already sitting around. The interior is clean and wide-open and no stranger than anything Tesla or Mercedes-Benz currently make.

If Hyundai, the corporate parent of Genesis, were to roll this out as is, they will have a bona fide hit. It looks thoroughly thought out, well-refined, and ready to roll. 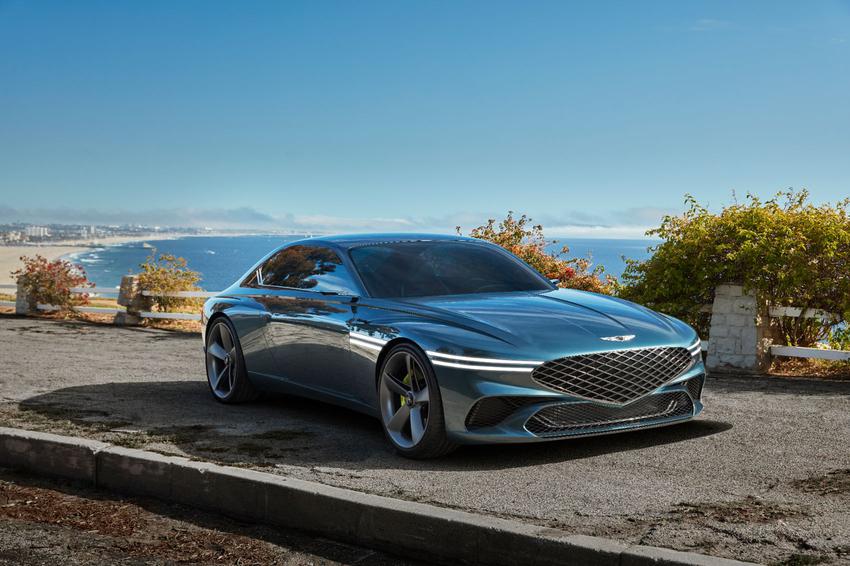 Genesis says the X Concept represents sustainable luxury in the form of an EV-based high-performance GT coupe. So, in that respect, it’s like many other concepts that scream, “look at me and see the real future is underneath.”

Like anyone else who can read a graph, Hyundai knows the internal combustion engine is probably on borrowed time. If we, as a species, don’t get EVs working or find some other solution in terms of green transportation, we’re pretty much cooked. At this point, Genesis has not gone into any real specifics or details about the powertrain or potential range of the X Concept. It looks fast, that’s for sure, and probably will be with what can be done with an EV powertrain these

What they do spend a ton of time on is the design. The Genesis X Concept exterior, though, is not so much new as it is fresh. It’s a fresh take on automotive themes that already work. It’s got that long nose/short rear deck layout that has been around since the 1930s; only it has been finessed and tuned into something original.

The Genesis X Concept is a coupe with a back seat, but the rear doesn’t look like an afterthought. It has two conventional doors that, when opened, are long, but they don’t seem loooooooong like the doors of so many show cars over the years. The greenhouse is tapered and curved; there are long, drawn-out lines that seem to connect all the exterior elements, from the clamshell hood to the trunk. The C-pillar even has a nice buttress that sort of looks like the Ferrari 2+2s of the 1960s.

It’s one of those designs where you can see the lines, but when you try to pick out just one to look deeper, it seems to flow into another line – then into that panel, or this panel, and then off and into the air around the Genesis X Concept. It’s a nice trick, and it works. As does the gorgeous color, which is more than just a regular blue. Lençóis Blue, to be exact. I thought it was a greenish tint at first, but nope, Genesis says it’s inspired by the lagoons of Maranhenses National Park in Brazil, where a lake forms only during the rainy season.

The main standout of the X Concept is the lighting. LED lighting has opened up many possibilities, and SangYup Lee, Head of Genesis’ Global Design, has taken full advantage here. The headlights, which are, technically speaking quad headlights, two per side, are a set of strips that run from the upper edge of the grille back to the front wheel well; and then (this is the trick) continue all the way back to the leading edge of the door. In one fell swoop – a literal swoop – Genesis has tied the headlights in with the turn signals, tied all that in with the side markers, AND used it all as a character line.

It’s so simple and so clever that I bet you lunch there’s some guys in Northern Italy right now banging their heads on their drafting table.

Like most new vehicle launches and concept unveilings, there is a lot of overwrought corporate-speak that comes off as superfluous. But you don’t really need any deep explanations as to what the Genesis X Concept is or represents. Perhaps the most interesting thing is how, one way or another, we are going to see the Genesis X Concept again. According to Lee, what we see here will serve as a “blueprint for the futuristic designs and state-of-the-art technologies that Genesis seeks to adopt in its future models.”

Which is a nice, corporate way of saying, “What’a’ya think about that?”