Porsche has launched a new generation of 911 Turbo S, which is the fastest and most powerful 911 Turbo model in history, which shows a lot. The 911 Turbo S offers the coveted 640 horsepower, advanced aerodynamics and suspension driving dynamics, and even daily usability (as far as sports cars are concerned). For those who like to blow their hair, the Porsche 911 Turbo S can also be used as a convertible.

Porsche has been making 911s since before most of our readers were alive. Given the changes in the automotive world in the past half-century, that in itself is a minor miracle and testament to just how far you can push a good initial design. Besides getting bigger and heavier over time (hey, middle age has its way with all of us) the 911 is largely the same.

Oh sure, they took air-cooling about as far as thermally possible and started water cooling their flat sixes a while back, but if you were to put a gearhead from 1965 in a time machine and bring them to today, show them this, the new Porsche 911 Turbo S, they’d spot it right away.

As with all 911s, it’s always about the engine and putting power to the ground. Turbo 911s even more so. For this version, the engine bay is occupied by a new 3.8-liter six-cylinder boxer plant with two turbochargers, electrically-adjustable waste gate flaps, and piezo injectors. Gone are the 930s of yore and their glacially slow turbo spool up. Turbo lag is a thing of the past, or so says Porsche.

The engine in the new 911 Turbo S puts out a healthy 60 horsepower more than its predecessor. Maximum torque, likewise, gets a bump and now stands at 590 lb-ft., an increase of 37 lb-ft. This plant is paired with a Turbo-specific eight-speed Porsche PDK (Doppelkupplung) dual-clutch transmission. A smart idea, given the bump in power and especially torque. 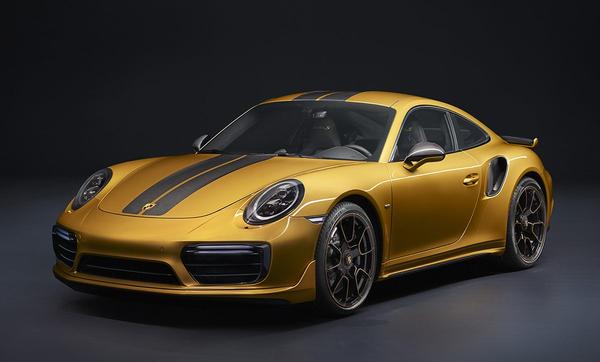 The bottom line is zero to 60 mph in just 2.6 seconds. It plummets to an absurdly slow 2.7 seconds for the cabriolet. Wait, did I say slow? I meant absurdly fast! The mid-2s, coupe or convert, is wickedly fast. And speaking of improvements, that’s a 0.2 second reduction compared to previous 911 Turbos. The standing quarter mile is dispatched in 10.5 seconds and the top speed for both Turbo S models is 205 mph.

At the heart of the Porsche 911 Turbo S are two symmetrical turbochargers with variable turbine geometry. The diameter of the turbine wheels has increased by five millimeters to 55 mm, while the 61 mm compressor wheel is now three millimeters larger than before. The waste gate flaps are electrically-controlled using stepper motors. Photo: Porsche Cars North America.

The aero package now includes adaptive cooling flaps at the front, and the larger rear wing for more downforce. Another first this time around are staggered center-lock wheels: 20-inch wheels at the nose, wrapped in model-specific 255/35 tires, and 21-inch rear wheels with Flintstone-esque 315/30 tires. That’s 10 millimeters more tire width versus the 2020 911 Carrera S models and previous 911 Turbo.

The charge air coolers, now 14 percent larger than before, were moved from their previous position in the rear fenders to directly behind the engine. This change increases air flow rate by about 13 percent. Photo: Porsche Cars North America.

As on the previous 911 Turbo S, there’s Porsche’s Dynamic Chassis Control, rear-axle steering, and Porsche’s Ceramic Composite Brakes with 10-piston front calipers standard. Also, the front brake rotors have gone up from 410 mm on the previous model to 420 mm.

It’s a common misconception that if a 911 is your dream car it’s impossible to own one because of cost. Author Robert McGowan has a great book about how to do this. McGowan is an active and respected member of both national and international Porsche clubs and forums, and is currently on his third Porsche. His book explains how you can own your dream 911 even on a budget.