Home > Coupe > Rover-BRM: The car that brought the jet era into Le Mans

Rover-BRM: The car that brought the jet era into Le Mans

BRM Rover turbine car race
ZTSG 18/02/2022 Coupe 163
For more than a century, the practicality, simplicity and cost of gasoline engines have been the defenders of all other alternative power systems. However, there are several moments in the history of...

For more than a century, the practicality, simplicity and cost of gasoline engines have been the defenders of all other alternative power systems. However, there are several moments in the history of automobiles that may profoundly change current automobiles. As the sales of electric vehicles surpassed that of gasoline vehicles at a certain point in time, the stream-engine power derived from locomotives is also optimistic. After the Second World War, people focused on a new form of advancement.

The jet turbine engine presented an optimistic venture for post-war engineers. Turbine technology would revolutionize the air travel and gained a footing in marine products. Though the 1950s was a time when airplanes drove automotive design, the 1960s was an era where auto companies explored the technology of the winged kind.

Just as the Jet Age provided a new range of possibilities to the sky, most major auto company in the United States and Europe would toy with gas turbine concept vehicles. Chrysler was the only company who brought turbine car to the road by building 50 production Ghia-bodied coupes for evaluation.

While production of gas turbine automobiles would never take off, motorsports briefly served as a proving ground for aerospace-inspired propulsion. While a near-win at the 1967 Indianapolis 500 would be the highest-profile effort of a gas turbine race car, sports car racing in the 1960s also hosted the experimental powerplant technology.

A collaboration between British Racing Motors (BRM) and the Rover Company, a prototype sports car was produced in 1963 in order to be demonstrated at the annual 24 Hours of Le Mans. Centered on a rear-mounted 2S/150 gas turbine engine, the Rover-BRM sports car was originally an open cockpit vehicle. Constructed with an aluminum body, the Rover-BRM was surprisingly compact and aerodynamic.

Similar to the DeltaWing entry in 2012, the Rover-BRM gas turbine ran as an unofficial experimental entry the 1963 24 Hours of Le Mans race. BRM’s drafted their Formula 1 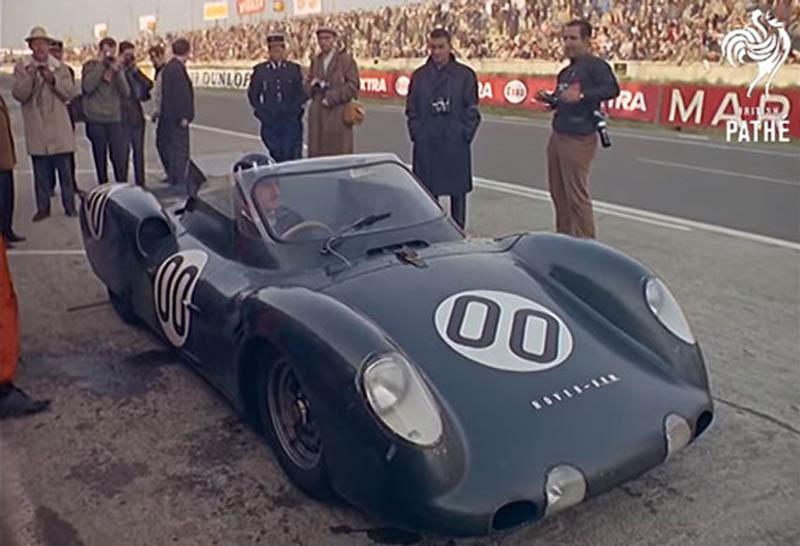 squad drivers Graham Hill and Richie Ginther to pilot the #00 turbine powered race car. Recorded with reaching high speeds along the Mulsanne stretch, the open cockpit Rover-BRM completed 310 laps at the Circuit de la Sarthe. If officially classified in the 1963 24 Hours of Le Mans, the Hill/Ginther race effort would have concluded with a solid overall top-10 finish.

After the 1963 finish in the 24 Hours of Le Mans, the Rover-BRM attempted two more appearances at the French sports car classic. A reengineered, closed-cockpit bodied Rover-BRM was ready for the 1964 race but was withdrawn due to damage prior to the 24-hour race. The 1965 Le Mans event would be the final race appearance for the gas turbine and the only time the car would be officially classified.

A young Jackie Stewart joined a returning Graham Hill in wheeling the #31 Rover-BRM. In the race, the car survived damage to its turbine powerplant to finish seventh in the prototype category. In the 1965 configuration, the Rover-BRM screamed down the Mulsanne straight to a 142-mile per hour top speed.

The end of the gas turbine experiment at Le Mans was a corporate takeover of Rover by British Leyland. Unrelated to the turbine car, the once-powerful BRM organization would slowly decline in popularity that led to closure after the 1977 Formula 1 season.

The 1965 Rover-BRM race car is currently maintained in the Heritage Motor Centre located in Gaydon, Warwickshire. Recalling the legacy of the Rover-BRM today at Le Mans, the motivation to beat the long-dominant gasoline internal combustion engine has probably fueled the Audi TDI diesel prototype project that last year included the R18 e-tron quattro.

The 1965 Rover-BRM race car is currently maintained at the Heritage Automobile Center in Gaydon, Warwickshire. Looking back at today's Rover-BRM legacy in Le Mans, the power that defeated the long-dominant gasoline internal combustion engine may have promoted the Audi TDI diesel prototype project including the R18 e-tron quattro last year.