2020 Honda Civic Type R: The same boy racing atmosphere, but better than before

2020 Honda Civic Type R is the Civic that will end all Civics.

Under the hood is a 2.0-liter VTEC turbo with 306 horsepower.

The 2020 Honda Civic Type R was unveiled recently at the Chicago Auto Show. Apparently, it has the same boy racer vibe as before. Large rear spoiler? Check. How about vents, scoops, and aero bits? Check; check; and check. Mind you, we’re not complaining at all. If you want a bonkers Civic, the Type R is the one to get. And if you can get past the rebellious façade, you’ll easily fall in love with the Type R’s endearing driving performance.

We’re not talking about an all-new model here, but the changes are extensive enough to warrant a closer look. It’s important to point out the new Type R was officially revealed last month at the Tokyo Auto Show, so we already knew about the transmogrifications. But during its U.S. debut in Chicago, the new Type R was basking in the full glory of its Boost Blue paint – the color of which is exclusive to the Type R.

Now, I don’t know about you, but the Type R’s new blue paint is astonishing.

What Engine Does The Civic Type R Have?

The 2020 Honda Civic Type R benefits from a new front grille. It now has a 13-percent larger opening to offer better engine cooling. Honda also reshaped the front and rear bumpers and gave both some body-colored accents. The front also has a redesigned front spoiler resting neatly under the bumper. It now has ribbed sections on each end to improve downforce as you scamper like a frightened cat in your Civic Type R. The larger grille was enough to somehow give the Type R a cleaner, more dignified face, but Honda basically kept the exterior as is, which is a good call if you’ll ask us.

Meanwhile, the biggest changes are hidden from plain view. For example, the new Type R has stiffer rear bushings and new dampers to deliver a cushier ride, which is the antithesis of a performance car. But since the Type R is for the street, it wouldn’t hurt if Honda gave it a more compliant set of shock absorbers, right? Meanwhile, Honda also updated the software for the adaptive dampers. It can now read the road surface 10 times faster than in the previous model. According to Honda, those lightning-quick dampers are responsible for better handling or ride comfort when you need it most.

Apparently, Honda also tinkered with the front suspension and steering components. This includes updated compliance bushings (which are 10 percent stiffer longitudinally) and lower-friction balljoints to deliver razor-sharp steering. Together with stiffer rear bushings in the lower B-arm, Honda ensured us the changes were necessary to improve the new Type R’s agility. The 2020 Type R is also home to a new pair of lighter two-piece brake rotors (which saves 5 pounds of weight) with upgraded pads which, according to Honda, reduce fade while improving braking performance at higher speeds. 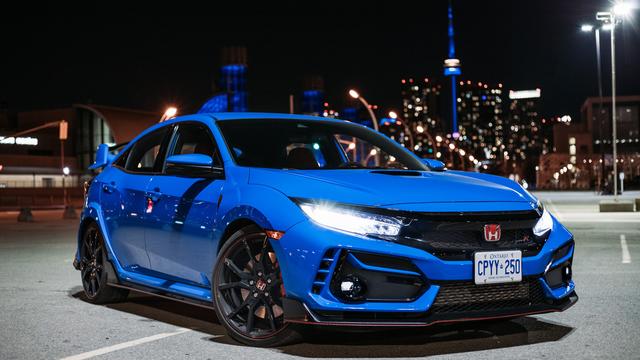 Honda was kind enough to update the 2020 Type R’s interior as well. The car now has a new steering wheel wrapped in genuine Alcantara; a new shifter with shorter throws (which remains one of the best and smoothest manual gearboxes in the business); and a new shift knob.

Also new for 2020 is Honda’s Active Sound Control system. I don’t speak for everybody here at Automoblog, but I think anything that produces fake engine sounds should be banned through eternity. Honda’s system modifies the sound according to your chosen drive mode (Comfort, Sport, and +R), but honestly, who needs it?

What Engine Does The Civic Type R Have?

Fast Hondas are all about the motor, and this one is no different as the Type R’s engine is unchanged for 2020. This means a race-bred and direct-injected, 2.0-liter VTEC turbo four-banger churning out 306 horsepower and 295 lb-ft. of torque. EPA ratings come in at 22/28 city/highway and 25 combined.

The engine is connected to a six-speed manual gearbox which feels like it’s made of premium Lurpak butter, unicorn hair, and Guimara’s mangoes. Yeah, the gearbox is that good. Honda always knew how to make a stick feel absolutely on point. Power is fed to the front wheels and is governed by a standard limited-slip differential.

For the first time ever in a Honda, the 2020 Civic Type R will come with Honda LogR. It’s a new data logger which allows the vehicle’s onboard computer and sensors to communicate with a smartphone app. This feature is exclusive to the new Type R and is good news for Honda fans who can’t resist tinkering with their rides. Honda LogR is a performance monitor; data logger; and performance driving coach in a single app. It works in both Android and Apple smartphones and is compatible to all 2020 and newer Type R models.

The 2020 Honda Civic Type R will be available beginning on February 28th. Starting MSRP is $37,950, which includes the destination charge of $955.