What is a Vehicle Title?

Types of Vehicle Title Fraud & How They Work

How to Detect Vehicle Title Fraud

#1: Owner has registered the car in a different state

#4: Information in the vehicle history report does not match that on the title

#5: Watermark is odd or missing

#6: Refusal to meet at the DMV

What to do if You Suspect Vehicle Title Fraud

What is a Vehicle Title?

The vehicle title is the state-issued document giving you proof of ownership over your car. If your name is not on the title, you do not own the car from a legal standpoint. It can either be a physical piece of paper or an electronic document. Besides telling who owns the car, it includes a variety of important notes about the vehicle itself. The information on the title varies from state to state. However, the title generally includes:

Name of the owner or owners and their address.

Odometer reading and the date when it was recorded.

VIN or Vehicle Identification Number, which is unique to the car.

The title includes information about the physical state of the car as well. Based on the vehicle’s condition, the DMV classifies it into one of the following types:

Clear: The vehicle does not have a lien against it, and there is no financial liability concerning it.

Clean: There has never been a large accident involving the car, and insurance agencies have not labeled it as “totaled.”

Rebuilt: The car once had a salvage title, but an owner has rebuilt it.

Salvage: The physical condition is severe because of an accident, vandalism, flood, or another disaster. The DMV or insurance company give the salvage designation when the cost of repair is higher than the vehicle’s value. Some states also declare stolen cars as salvage.

Types of Vehicle Title Fraud & How They Work

Some of the most common scams related to vehicle title fraud revolve around the salvage status. Since vehicles with a salvage title almost always sell for less money, there is motivation to hide the salvage designation with the appearance of a clean and clear title. There are many methods of tampering with the title, but we can group them into three general categories. 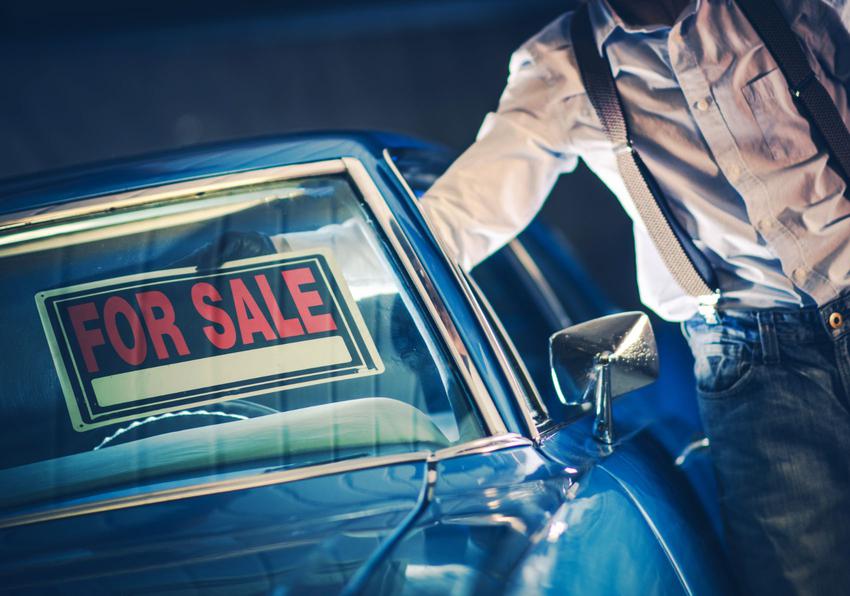 Title washing is the most common type of vehicle title fraud. Carfax estimates there are 800,000 cases in the United States alone, including a prominent case in Texas in 2011. Here are some common ways owners wash titles:

By altering the title document to hide the salvage record.

Registering the totaled car in a state where recording the salvage status is not mandatory.

The next type of fraud is title jumping, a common practice of buying a vehicle without registering it in your name and then selling it to someone else. Title jumping is commonly used by unlicensed car dealers to avoid paying taxes and other fees.

This is a relatively new method of vehicle title fraud. It involves altering the VIN number of the vehicle to hide its past from the buyer. Usually, scammers will swap the salvaged VIN with a clean one. Thieves may also use this method to disguise a stolen car. According to the National Highway Traffic Safety Administration, a vehicle is stolen about every 40 seconds in the United States, although there are ways to protect yourself.

If you suspect the car yo

u are looking at might be stolen, the National Insurance Crime Bureau offers its free VINCheck service for consumers. A maximum of five searches can be conducted within a 24-hour period per IP address. The Honda Civic, Toyota Camry, and Ford F-150 are among the most commonly stolen vehicles in the United States.

The fraud examples described above are generally illegal. We use the term “generally,” as sometimes existing laws do not cover all the schemes, and not all state jurisdictions are consistent in their definitions of vehicle title fraud. These legal gray areas allow bad actors to hide the “unfortunate” past of a damaged vehicle, and they often make a considerable profit out of doing so.

For example, in 2005, Hurricane Katrina left a vast number of cars underwater. Insurance companies paid the claims to their owners and ended up with a fleet of severely damaged cars. They passed these cars to the wholesale market. However, not all the players in this market followed the ethical rules of branding these vehicles as salvage or rebuilt. They re-registered the cars in states with lax salvage rules and resold them under clean titles.

Gray areas in the law make it possible for scammers to commit vehicle title fraud.

How to Detect Vehicle Title Fraud

Here are six simple ways to check the authenticity of your future car’s title before purchasing it.

#1: Owner has registered the car in a different state

Although there might be a valid reason they did the registration elsewhere, still be careful when buying that car. Being registered in another state is one sign of title washing. You should ask the seller for a reasonable explanation.

Sometimes there is nothing to worry about as the title could be a genuine document that is simply old. If it’s an older model vehicle, chances are it has already changed hands several times before reaching you. Still, pay careful attention to the print quality and any signs of physical tampering. If the printing looks unnatural, it could be a counterfeit title.

This is another potential red flag. It will look unnatural if someone is selling you a 12-year-old vehicle with a title issued several months ago. Ask for a reasonable explanation from the seller.

#4: Information in the vehicle history report does not match that on the title

While the scammers might have meddled with the title, the Vehicle History Report also lists important information about the car in question. This report is much harder to fake as it is a digital document stored on secure servers. If you have compared the information on the title with this report and found significant differences, it may be another indicator you are dealing with a scammer.

#5: Watermark is odd or missing

For security reasons, states issue salvage title documents with a watermark. It is difficult to counterfeit a title with a watermark that looks authentic. So an easy method to detect a fake title is comparing it with another one issued by your DMV.

#6: Refusal to meet at the DMV

Possibly the best way to protect yourself against vehicle title fraud is asking the seller to accompany you to the local DMV to complete the transfer of ownership. Naturally, no scammer would be willing to take illegal or incomplete documents to the authority that issues and checks those. So if your seller insists on completing the ownership transfer outside the DMV, consider that as another red flag.

What to do if You Suspect Vehicle Title Fraud

If you suspect your car has a fraudulent title, immediately report it to your local police department, your insurance company, or the National Insurance Crime Bureau.

Patrick Peterson is the author/editor of AutoDetective. He was born and raised in the automotive world and is a passionate writer who has created beautiful content about all related content about cars and bicycles.