Forza Horizon Corvette drive
ZTSG 05/02/2022 Hatchback 255
Well, let’s see who decides to join the party. In this case, it is the beauty of the automotive world, the new Corvette C8. The party in question is Forza Horizon 4, driving game/music festival/any. T...

Well, let’s see who decides to join the party. In this case, it is the beauty of the automotive world, the new Corvette C8. The party in question is Forza Horizon 4, driving game/music festival/any. This makes perfect sense, and besides, this is probably the easiest way for me to enter C8 for a "test drive".

Turn 10 Games, the creators of the Forza series of driving games – that would be Forza Motorsports and it’s little brother, the raucous, open world Forza Horizon – just announced it will release the mid-engine Chevrolet Corvette Stingray on the Forza Horizon 4 gaming platform on Thursday, January 14th.

Calling the latest Corvette Stingray “one of the world’s most sought-after sports cars” would be a bit of an understatement. They’re rare as hen’s teeth on the open market (and also feature big dealer mark-ups to bolster that contention) and getting one for a test drive, even for a respected automotive journalist such as myself has proved next to impossible. (Hey, shut up, I am a journalist!)

Anyway, yes, this would be the 6.2-liter V8 LT2 Corvette Stingray that cranks out 495 horsepower and 470 lb-ft. of torque. That’s SAE certified, so no whining! Yes, that makes it the most powerful Corvette ever. And yes, as of Thursday, you and me and all the rest of us busted-knuckle, dirty-fingernailed gearheads can finally get our hands on one. That is, assuming you’ve got Forza Horizon 4. 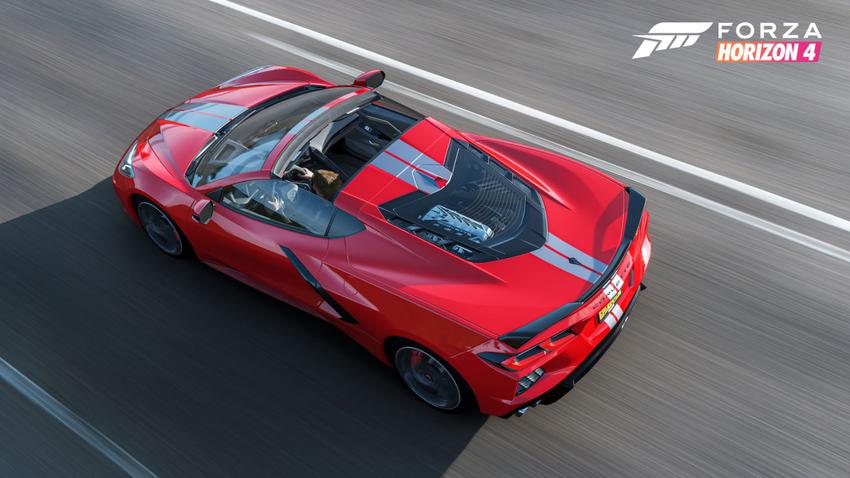 I received Forza Horizon 4 a couple of weeks back (a late Christmas present from a good friend/Doctor/gamer), and boy

howdy is it addictive. Horizon is odd for a driving game. It’s open world and set in “England” (actually, it looks more like Edinburgh, Scotland), and usually, there’s some sort of goofy music festival/rave/party going on.

You’re sort of part and parcel with that, but, so far, I’ve ignored 90 percent of that and have just ripped around “England” in whatever I can find. It is gearhead heaven! You can drive as fast as you want with no consequences. There are no cops (so no tickets) and any accidents or crashes can be whisked away with a hit of the rewind button (or simply selecting “no damage” on your car setup).

You can literally drive like a complete and total maniac for as long as you want. Feel like taking a modern hypercar down a dirt road? Forza Horizon says, “Be our guest!”

And now you can get to be a complete hoon in the new Vette. Which, as I said, is really cool, cause darned if I can talk Chevy into loaning me one of the things. Shoot, the whole team at 1 Automoblog Tower in Detroit has been angling for at least a test drive (if not a loaner), and so far, no dice. So, until they cough one up, Forza Horizon will be the next best thing.