Cooper Mini 2016 convertible top
ZTSG 05/07/2022 Hatchback 157
The third-generation Mini Cooper has been in production for nearly two years. Now, Mini has finally released the official pictures and information of the convertible before its world premiere at the T...

The third-generation Mini Cooper has been in production for nearly two years. Now, Mini has finally released the official pictures and information of the convertible before its world premiere at the Tokyo Motor Show in 2015.

Starting in March, the Mini Cooper convertible will be available in both the regular version and the more powerful Cooper S. The new Cooper convertible is the first drop top based on BMW’s front-wheel drive family chassis and will be exclusively powered by BMW-developed, turbocharged three and four-cylinder engines.

At first glance, the third generation Cooper drop top looks similar in design to the second generation variant, and it retains the overall profile of the hardtop with its fabric roof folded up. Like before, the roof can be partially retracted, like a sunroof, or can be completely folded behind the rear passenger seats. The convertible folding mechanism is now fully electric and can be operated at speeds up to 18 mph. Like it did in the second generation version, the tailgate flips down, and the base of the soft top can be lifted to accommodate larger items than before.

The top stack of the convertible has been redesigned to enhance the rearward visibility with the top completely folded. Pyrotechnic rollover bars replace the clunky hoops behind the rear headrests. That cleans up the side profile when the top is down.

For 2016, the roof of the Mini Cooper convertible can be embroidered with the Union Jack (like the hardtop). The new Cooper convertible will be available in 11 colors, including a new Caribbean Aqua hue, which Mini brought back from their classic color palette. Melting Silver, a color which debuted on the new Mini Clubman, is also available.

The gimmicky Always Open Timer, which logs how many miles the car has traveled with its top down, returns as a fun factor. Also, the 2016 Mini Cooper convertible is available with diamond-stitched seats and a cool rain-warning app (which you can skip and just look up at the skies for any approaching thunderstorms).

With the roof panel deleted, the Mini Cooper convertible’s structure is strengthened at the front and rear under body, door sills, and underneath the engine. Additional insulation in the tailgate and roof helps lower noise at high speeds. With larger dimensions and added insulation, the 2016 Mini Cooper convertible gains between 127 to 174 pounds, depending on the engine and transmission combination. 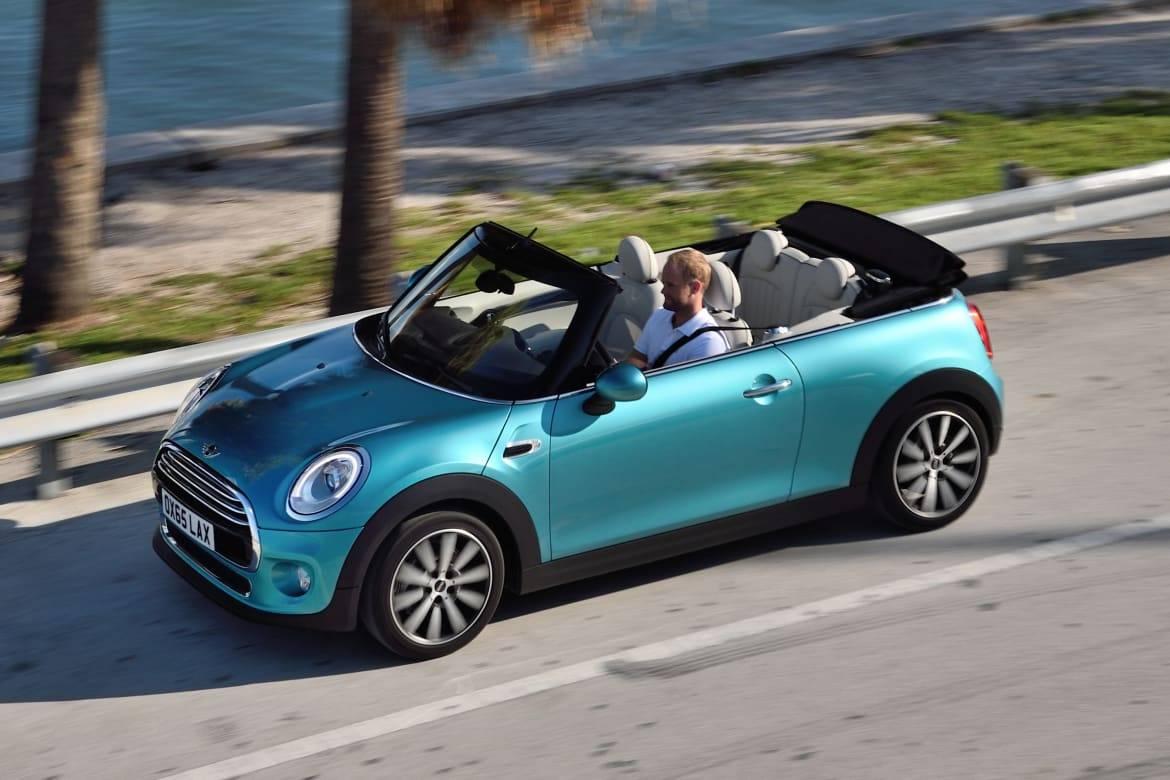 The Cooper S convertible, for example, weighs close to 3,000 pounds.

The automatic transmission uses the navigation system to determine the ideal shift points.

However, if these two Cooper drop tops are not powerful enough, a Mini Cooper JCW (John Cooper Works) convertible will be available a couple of months later.