The last time Professor Gordon Murray CBE came up with a new car, it became a classic icon. Thirty years later, we have the GMA T.50, and Gordon Murray Automotive (GMA) claims that this car is rewriting the supercar’s rulebook. This is a bold proposition, considering that the predecessor of the T.50 is the McLaren F1, which is considered by professional drivers, connoisseurs and enthusiasts to be the supercar with the best driving performance so far.

Who Is Gordon Murray?

It’s All About The Motor

Who Is Gordon Murray?

Professor Ian Gordon Murray CBE is a South African-born British designer of Formula 1 racing cars. Prof. Murray is responsible for creating the innovative BT46B F1 car, more popularly known as the Brabham “fan car.” The man was part of the design team that produced the McLaren MP4/4 F1 car, which won 15 of the 16 Grand Prix races during the 1988 F1 season. It was also the same car that gave the legendary Ayrton Senna his first taste of the F1 Driver’s Championship.

Prof. Murray’s latest masterpiece is the T.50 fan car – the 50th car designed by the man himself. And even though the T.50 you see here is still in pre-production prototype form, it has a bewildering array of innovative features to make your head spin.

The GMA T.50 is a perfect blend of the old and the new. You can think of it as a modern supercar with the philosophy of an analogue speed machine. “With 30 years of technological and systems advancement, the time is right to design the greatest analogue driver’s car,” Murray said. “I believe no other company could deliver what we will bring to market in 2022. Producing this supercar will be my proudest moment.”

The GMA T.50 was designed to fulfill two goals. First, to be the best-engineered car on the planet. And second, to provide the best driving experience. Prof. Murray couldn’t care less about acceleration, lap times, and top speed because, as he succinctly points out, the important thing for a supercar is how it makes you feel on the road, and we admire that passion from the get-go.

It’s All About The Motor

For all intents and purposes, the GMA T.50 shares many critical elements that made the McLaren F1 great. The GMA T.50 is also a fan car (you didn’t know the McLaren F1 was a fan car, did you?) and has a central driving position. Above all, the GMA T.50 has a roaring naturally-aspirated V12 and a six-speed manual transmission like the F1.

And boy, what an engine it has. The GMA T.50 makes do with a 3.9-liter naturally-aspirated V12 engine developed explicitly by Cosworth and GMA for the T.50. It produces 650 horsepower, 344 lb-ft. of torque, and can spin to an astonishing 12,100 rpm. And really, could you think of any production engine that revs this high? The engine churns out 71 percent of its maximum torque from 2,500 rpm and is the most power-dense naturally-aspirated engine (163 horsepower per-liter) in history. 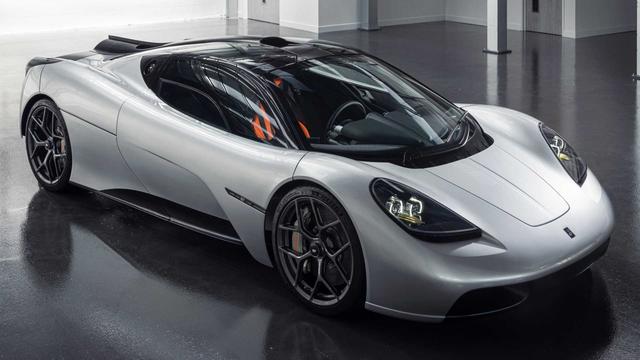 Since Prof. Murray is obsessed with lightness, this new V12 tips the scales at only 392 lbs., making it the lightest road-going V12 ever. We know modern supercars (or hypercars) like the Bugatti Chiron have upwards of 1,000 horsepower, but the GMA T.50 weighs less than 2,173 lbs. (986 kg). Prof. Murray is right: if you start with a lightweight package,

you don’t need a 1,000 horsepower for a car to be fast. For comparison, the GMA T.50 has a better power-to-weight ratio than a McLaren P1 GTR or Ferrari LaFerrari.

“From the first touch of the titanium throttle pedal to the V12 screaming at 12,100rpm, the driver experience will surpass any supercar ever built,” Murray added. “No other road car can deliver the package of power, instant responsiveness and driver feedback in such a direct and focused way while remaining comfortable, refined, and usable every day.”

The V12 engine is paired with an Xtrac six-speed manual gearbox with five close-ratio gears. Equipped with an aluminum casing, the transmission only weighs 177 lbs. (80.5 kg). Likewise, GMA says the carbon-fiber tub and body panels weigh less than 330 pounds (150 kg).

Sure, we can talk about the GMA T.50’s design with its jet fighter cockpit, central driving position, innovative cargo room (believe it or not), and awesome dihedral doors, but that fan at the rear stands out. No, the fan itself is not entirely responsible for cooling the bespoke V12 motor, as it has a more important job to perform.

That 40 cm electrically-operated fan is responsible for providing “boundary layer control” and draws power from a 48-volt integrated starter-generator (yes, the GMA T.50 is a mild-hybrid). In layman’s terms, the fan works in combination with two active aero winglets at the back and two undercarriage ducts to route oncoming air. In essence, the fan creates air pressure to suck the T.50 to the road, literally.

Then, you have Streamline Mode, which closes the undercarriage aero ducts and the rear spoiler while the fan spins at maximum speed. According to GMA, this configuration creates a longtail effect at higher speeds without needing an actual longtail rear design like the record-breaking Bugatti Chiron Super Sport 300+ and McLaren Speedtail.

Next is VMAX Mode, which offers a similar aero configuration as Streamline mode. However, VMAX increases engine output by 30 more horsepower courtesy of the 48-volt integrated starter-generator. You can do this for up to three minutes as the GMA T.50 rushes to the stratosphere. Finally, Test Mode is driver-selected and operates when the vehicle is stationary. In this mode, the fan spools up to maximum speed to cool the engine, while the spoilers and ducts cycle through a full range of motion.

As we said, the GMA T.50 is not about lap times, but it has a theoretical top speed of 277 mph. And since it weighs similar to a small compact car, we reckon it’ll rush to 60 mph in less than three seconds, although GMA has yet to confirm.

Hold on to your wallets. The GMA T.50 has a base price of three million (£2.36 million plus taxes). Limited to only 100 units worldwide, production for the GMA T.50 starts in January 2022. Standard features include a 700-watt premium audio system with Apple CarPlay and Android Auto, three seats, a three-spoke carbon-fiber steering wheel, a titanium accelerator pedal, and an aluminum brake and clutch pedal.