Prindiville car Murcielago side system
ZTSG 24/11/2021 Hatchback 202
Not just any Lamborghini, it is a highly modified 700 horsepower monster Murcielago from London tuner Prindiville.What you have to keep in mind here is that I’ve only ever driven in the States – left...

Not just any Lamborghini, it is a highly modified 700 horsepower monster Murcielago from London tuner Prindiville.

What you have to keep in mind here is that I’ve only ever driven in the States – left side of the car, right side of the road. You know, like most of the rest of the world. While I could have practiced driving on the wrong side of the road and car with something a little more reasonable, like, I don’t know, any other car in the world, I met the owner of Prindiville, Alex Prindiville, for an interview at which he brought along his signature Murcielago.

This car is #1 of only 5 made, using just about every option they have for the car. Looking much wilder than a standard Murcielago, Prindiville replaced every single body panel on the car (except for the front compartment lid) with their own carbon fiber pieces, many with slats and other aerodynamic changes to increase downforce and appearance, reducing the body panels’ weight by around 65%. Even the engine bay cover was replaced by a restyled transparent deal.

They’ve also shaved the door handles for a smoother exterior and replaced the wheels with their own. In the rear sits a redesigned valance housing their own custom stainless steel exhaust, which aids with power and gives off quite a loud growl. The roof panel is even replaced with your choice of carbon fiber or aluminum and reshaped to give extra cooling power to the hotter-running engine.

And the reason it runs hotter is due to the Prindiville team’s extensive tuning of the engine to return somewhere in the vicinity of 700 horsepower, up from the Murcielago’s factory 572 hp, partly thanks to the aforementioned exhaust system, but mostly due to their retuning the ECU.

Inside is probably the most obvious transformation, with wild red “frog skin” panels and seat inserts, along with jeweled aluminum accents on the panels and milled aluminum air vents. A 1000W audio system pairs with four cameras mounted on the front, rear, and each side providing 360-degree cov 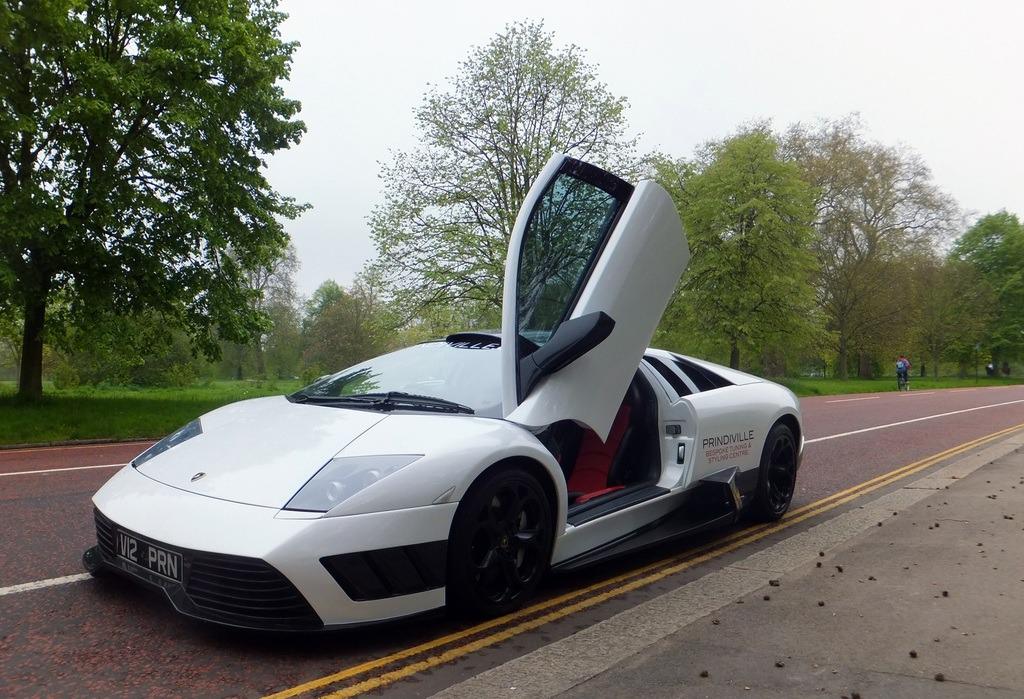 Of course, if any of that doesn’t float your boat, they’ll give you anything you want for the right price.

I’ve driven my fair share of supercars before, but having never driven on the wrong side of the road and car before, I was a little nervous. Alex was kind enough to get us past the god-awful London traffic onto the motorway, where we switched places. Back home, my natural instinct while driving is to stay close to the left lane marker. Turns out when I follow that instinct in a 7-foot-wide, right-hand-drive Lamborghini, I take up more than my fair share of lanes.

Aside from the occasional, err...manual steering wheel correction from an incredibly patient Alex Prindiville, I had a blast in the car. The most impressive part was that they were able to provide such an increase in power without affecting driveability. If anything, it felt a bit too smooth for a Lambo. But there was no question of its intentions – a tunnel blast with Prindiville’s loudest and most free-flowing exhaust screams like a lion being thrown out of an airplane.

More recently, Prindiville have tuned the newer Lamborghini Aventador, and are especially excited about their newest creation, the

– limited to 25 units total. Starting with the Defender 90, they’ve made it a two-seater, increased the 2.4-liter four-cylinder’s power to 190 hp, giving it their own stainless exhaust system, suspension package, braking system, and 18-inch alloys, as well as adding LED front and rear lighting, noise-canceling in the cabin, and a custom interior with Italian leather and their own entertainment system.

Prindiville may not be among the big-name tuners quite yet, but they’re making some of the more interesting vehicles on the road today. Expect to hear more about the tuner as more supercars are unveiled, and they get their hands on them.

Check out more pictures of the Prindyville Lamborghini Murcielago I drove in London below.