The LS427/570 crate engine is an enhanced version of the mass-produced LS7.

Unique features include an F-body aluminum oil pan and a wet-sump oil pump.

Chevrolet Performance recently unveiled its all-new LS427/570 crate engine. This engine serves as an increased output rendition of the already robust LS7. The newly debuted LS427/570 produces an estimated 570 horsepower and 540 lb-ft. of torque, which bests the LS7 by considerable margins.

While these noteworthy performance figures certainly inspire awe from gearheads far and wide, we have to wonder just how Chevy did it. Here is a rundown of everything we know about the LS427/570.

A Pedigree of Performance

The LS427/570 has numerous design elements that each play their own distinct role in providing the engine with its race-ready capabilities. However, few play as significant of a role as that of the high-lift roller camshaft.

Unique in its design, this camshaft produces 0.591-inches of intake lift and 0.590-inches of exhaust lift. A total intake duration of 227 degrees and exhaust duration of 242 degrees is also presented, with a lobe separation angle of 116 degrees. 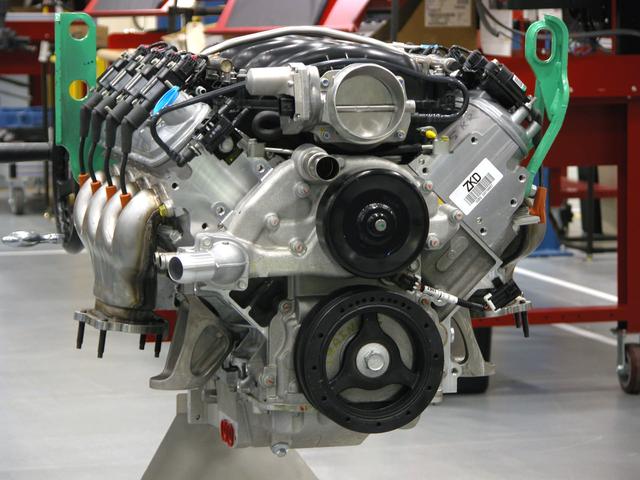 A Pedigree of Performance

The LS7 lends its proven, forged steel crankshaft and titanium connecting rods to the new LS427/570. At the same time, some holdover components from prior Camaro models are also utilized, including a 14-inch Z/28 168-tooth manual transmission flywheel and fifth-gen Z/28 exhaust manifolds.

Also borrowing from its LS7 predecessor, the LS427/570 makes use of a low-profile EFI intake manifold with pre-installed fuel rails and injectors, as well as a throttle body.

The LS427/570 crate engine is based on the LS7 (pictured) and uses a unique camshaft to help produce 570 horsepower. The LS427/570 assembly includes an F-body wet-sump oil pan and Z/28 exhaust manifolds. Photo: Chevrolet Performance.

Chevrolet Performance touts the LS427/570 as being easy to install, due in large part to its wet sump oil pump. The use of such eliminates the need for additional component installation, and no other oil reservoir or oil lines are necessary.

While it is hard to say how much fanfare the newly designed LS427/570 will receive, it seems reasonably safe to say an overall lack of output will never be to blame if sales are anything less than impressive.

The LS427/570 engine is now available to order through Chevrolet Performance dealers and retailers. The part number is 19420191.