Ioniq Electric Hyundai 2020 battery
ZTSG 03/09/2022 New energy 128
Modern Ioniq Electric has a wider range of use in the United States.Standard DC fast charge provides 136 miles (80% of range) in 54 minutes.Apple CarPlay, Android Auto, and navigation are among the te...

Modern Ioniq Electric has a wider range of use in the United States.

Apple CarPlay, Android Auto, and navigation are among the tech features.

The 2020 Hyundai Ioniq Electric is welcoming the new year with a longer range and faster charging capabilities. In truth, the Ioniq Electric is a sterling choice in the compact EV segment. But two things are holding it back from being truly great. First, it’s how Hyundai initially insisted on only selling the Ioniq Electric (together with the Kona EV) in California. Which makes sense at first, but there is evidence to suggest other states are just as (if not more so) EV-friendly as California.

Meanwhile, the plug-in hybrid and hybrid version of the Ioniq are available elsewhere, so what’s the catch?

How Much Is The 2020 Hyundai Ioniq Electric?

Hyundai only sold 777 Ioniq Electric units since it was launched in 2017, and that’s not a lot. In fact, Hyundai sold more than 1,500 units of the Ioniq PHEV within a 12 month span. Expanding the supply chain will solve this problem for the Ioniq Electric, so don’t be surprised if you see more of them from here on.

However, the Ioniq Electric’s biggest waterloo is its dismal range. You see, previous models had a minuscule 28 kWh battery pack, good for just 124 miles. Admittedly, it had less range than the popular Nissan Leaf, but the 2020 model aims to change that. 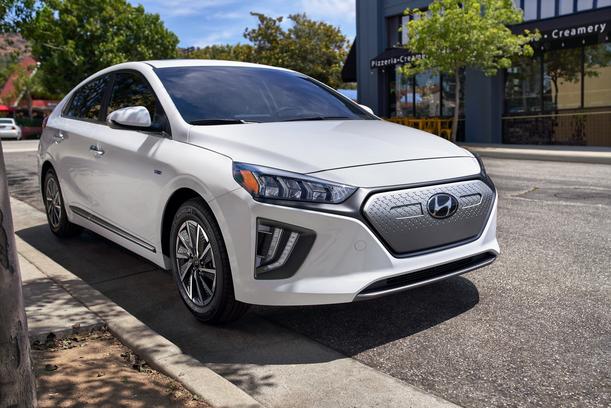 Hyundai updated the previous Ioniq EV’s 28 kWh battery pack with a larger 38.3 kWh unit. This increases the range to 170 miles, which is 46 miles higher than the prior generation. Also, the figure is higher than a base Nissan Leaf, particularly the one with a 40 kWh battery pack. The Leaf with that battery pack is good for 147 miles, despite being a slightly larger battery than the new Ioniq Electric.

Granted, the Leaf Plus, with its 62 kWh battery pack, boasts 226 miles of range, but it starts at $38,200 before federal tax credits. In contrast, the base Nissan Leaf costs around $31,600 and is often the considered one of the most affordable all-electric cars, but the 2020 Hyundai Ioniq Electric is not far behind.

How Much Is The 2020 Hyundai Ioniq Electric?

The 2020 Hyundai Ioniq Electric is available in two trim levels. The base SE starts at $33,045 (before federal tax credits) while the Limited is $38,615. Add in another $995 for destination and handling, and the new model is around $3,000 more than before. The good news is you get a handsome list of appearance and performance updates.

The battery of the 2020 Hyundai Ioniq Electric was upgraded from 28 kWh to 38.3 kWh. The change increases energy storage capacity by 36 percent. Photo: Hyundai Motor America.

Of course, having a larger capacity battery means the ability to supply power to an equally larger and more powerful electric motor. The outgoing Ioniq Electric had an 88 kW electric motor good for 118 horsepower and 218 lb-ft. torque – clearly outclassed by the base Nissan Leaf with 147 horsepower and 236 lb-ft. of torque.

Now, the new Hyundai Ioniq Electric is packing a more serious punch. With an upgraded 100 kWh electric motor, it pushes 134 horsepower and 218 lb-ft. of torque to the front wheels. Yes, it’s still less power than a base Leaf, but don’t forget you have 170 miles of range compared to the base Leaf’s 150 miles of range.

Hyundai also added a new Eco+ driving mode to supplement the standard Eco, Comfort, and Sport modes. It’s also worth mentioning the new Ioniq Electric has a combined rating of 133 MPGe, making it one of the most efficient new cars sold in America.

With a larger battery pack, the 2020 Hyundai Ioniq Electric includes a faster 7.2 kW charging unit. (The previous model had a 6.6 kW Type 2 charger by comparison). According to Hyundai, with a 100 kW fast-charging station, you can go from zero to 80 percent battery life in under an hour. Hyundai also partnered with Amazon to provide Ioniq Electric buyers with a choice of home charging systems.