eROT Audi energy Strategy system
ZTSG 08/03/2022 New energy 221
I cringe when I hit potholes or lumps-it’s worse when I don’t see them until the last minute. This frustration is an opportunity for Audi to launch a new suspension prototype called eROT. This technol...

I cringe when I hit potholes or lumps-it’s worse when I don’t see them until the last minute. This frustration is an opportunity for Audi to launch a new suspension prototype called eROT. This technology replaces traditional hydraulic shock absorbers with electromechanical shock absorbers, but the risk it faces is not only the ride quality.

According to the automaker, energy recuperation plays an important role in the vehicles of the future.

There are two essential parts to eROT, the first of which seems straight forward. eROT is an active suspension, adjusting to road imperfections and irregularities accordingly for a more refined feel. eROT eliminates the rebound and compression strokes of traditional hydraulic dampers; Audi can now configure a better, more stable compression stroke without interrupting the damping of the rebound stroke.

“It presents us and our customers with entirely new possibilities for adjusting the suspension,” said Dr.-Ing. Stefan Knirsch, Board Member for Technical Development at Audi AG. 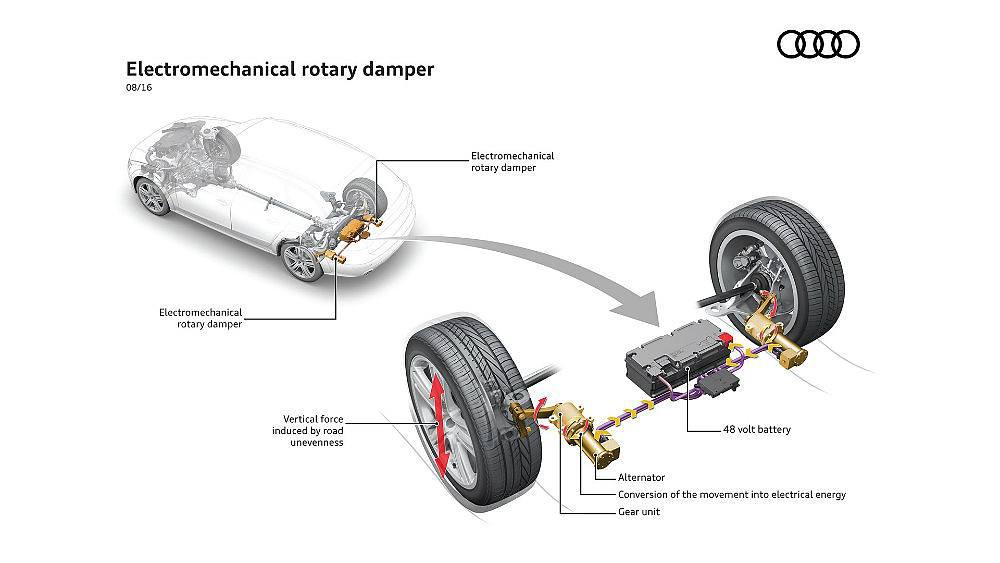 Beyond a smooth ride, eROT converts kinetic energy during compression and rebound into electricity with a lever arm. The lever arm transmits this force through a series of gears to an electric motor, which then converts it into electricity. The average recuperation output was anywhere from 100 to 150 watts during testing on German roads. On a smooth freeway, the numbers were in the single digits, but on rougher terrain, it was over 600 watts.

Audi concludes the typical customer can record a CO2 savings of 4.8 grams per mile. According to Dr. Knirsch, there are plenty of opportunities for eROT to shine.

“Every pothole, every bump, every curve induces kinetic energy in the car,” he explained. “

Today’s dampers absorb this energy, which is lost in the form of heat. With the new electromechanical damper system in the 48-volt electrical system, we put this energy to use.”

The initial tests are positive and eROT might be included on Audi’s production vehicles one day. The electric motors are even placed in the rear axle area in such a way as to not effect cargo space.