Bugatti Baby
AutoWorld 15/01/2022 New energy 140
Finally there is an affordable Bugatti! almost. In this case, we are talking about the Bugatti Baby II, which is a modern version of the French company’s pre-war baby car, based on their Type 35 Grand...

Finally there is an affordable Bugatti! almost. In this case, we are talking about the Bugatti Baby II, which is a modern version of the French company’s pre-war baby car, based on their Type 35 Grand Prix racer. Indeed, it is not full size, but Bugatti said that an adult can squeeze into the Baby II, even if I may not be able to do it, I still want to try.

Right, let’s get the bad news out of the way. The Baby II is cheap, by Bugatti standards, but it still costs a lot. Just over $40,000, to be exact. Which means it’s a plaything for (literal) rich kids and their (possibly) diminutive parents. It’s cool, no two ways about it, but $40k is a lot of money, even relatively speaking. You could start with a Spec Miata from scratch and race for years with $40k. You could do the same in SCCA club rallying or probably pull off a couple of seasons in Formula Ford or Formula Vee.

But why do that? Especially if you’re the kind of Bugatti owner that most likely has yachts and private jets.

They’ve just started delivering them to customers in Europe and the Middle East. The first European Baby II went to a private Bugatti collector in Belgium that already owns a Type 35 A, an original Bugatti Baby, and several other pre-war Bugattis. The first Baby II making it outside of Europe has arrived with another long-time Bugatti owner in Dubai, but this one has lots of custom features. The owner is the operator of a private jet terminal in the UAE (no, really, that’s his “job”). His new Baby II is a carbon fiber Vitesse version that will be used for private transfers to VIP sections of the airport (no, really).

All Baby IIs are entirely customizable to the new owner’s whims, but just the basic specs show how interesting the “car” is. The Little Car Company makes them in partnership with Bugatti. At first glance, they look just like the original Bugatti Baby built in 1926. The Baby II was developed to celebrate Bugatti’s 110th anniversary, which is an odd way for them to go – making what amounts to a toy over a special, anniversary road-going car. 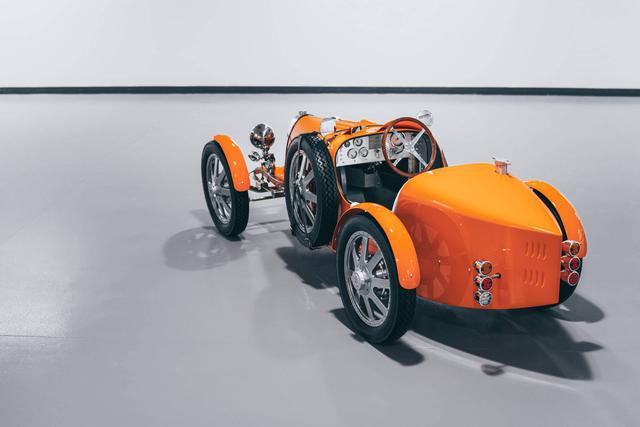 The Bugatti Baby II comes in three versions: Base, Vitesse, and Pur Sang. Vitesse versions have carbon-fiber bodywork, an upgraded powertrain with a 2.8kWh battery pack, and a Speed Key, just like the Chiro

n. The available Touring Pack features a high-power LED headlight upgrade, brake light package, mudguard and fender package, plus upgraded wiring harnesses and looms. The Pur Sang offers the same powertrain as the Vitesse, but the bodywork is hand-formed aluminum that takes more than 200 hours of skilled craftsmanship to create.

Each car is complete with an individual chassis number. For example, the guy in Belgium got chassis 388 to match the original Bugatti Baby in his collection. Baby II customers also receive a branded presentation box enclosing their owner’s manual, keys, and an exclusive book detailing the story of the handcrafted Bugatti Baby II. There’s even an optional Jetex transport case.

Stand back because when you turn that key, you’ll get up to 10kW (13.4 bhp) of power! With an all-up weight of just 230kg (507 lbs.), achieving a top speed of 70kph (42 mph) in the Bugatti Baby II is no problem. And you gotta love this description from Bugatti: “Depending on the weight of the driver, zero to 60 kph is dispatched in just six seconds.”

Which is a polite way of saying, if you’re a kid, you can get to 60 clicks in six seconds with the Bugatti Baby II. However, if you’re a corpulent rich jerk that looks like the cover of that one Warrant album, it’ll take a little longer.