Blazer Chevrolet electric Chevy Performance
ZTSG 19/04/2022 New energy 205
Chevrolet's latest concept car is "Explosion from the Past", let's go back to the 1970s, when the K5 Blazer was hanging out on the street. This is Chevrolet's latest eCrate conversion concept, which c...

Chevrolet's latest concept car is "Explosion from the Past", let's go back to the 1970s, when the K5 Blazer was hanging out on the street. This is Chevrolet's latest eCrate conversion concept, which combines the body of the 1977 K5 Blazer with an all-electric propulsion system. The result is this amazing K5 Blazer-E.

If you’re like me, you’ve heard Gen Z drivers lament the classic good looks of mid-century rides – especially muscle cars – and yearn for an environmentally friendly option. Expect that group to be among the most ardent fans of this K5 Blazer-E concept when it debuts at the virtual SEMA360 show on November 2nd.

Bring Out The Big Guns

Bring Out The Big Guns

Chevy likes to impress the crowd at the SEMA show in Las Vegas. More recently, they have showcased things like the Luke Bryan Suburban Concept, the eCOPO Camaro Concept, and other unique and interesting Silverado models. The big hit last year was the E-10 concept.

“Minutes after Chevrolet showed the E-10 concept, customers started calling to ask how soon they could build their EV project,” said Russ O’Blenes, Chevrolet Director of Engineering, Performance, and Racing. “The K5 Blazer-E demonstrates what is possible for customers who want to convert their vintage truck to a daily driver with the instant torque and unique driving experience of an EV.”

Chevy says this latest concept is “functional proof” of the viability of the Electric Connect and Cruise package it plans to sell in the second half of 2021. Chevrolet Performance will survey SEMA members interested in building their electric projects to finalize the automaker’s initial eCrate offering. “For customers who want more extreme performance, the modular eCrate system will have virtually limitless applications,” O’Blenes added.

Chevy’s concept began with the original 1977 K5 Blazer. The team removed the Blazer’s 175-horsepower 400 cubic-inch V8 and three-speed automatic (they also ripped out the fuel and exhaust systems). They replaced that engine with a Bolt EV electric motor, which delivers 200 horsepower and 266 lb-ft. of torque. The electric motor is paired with an electronically controlled four-speed automatic from Chevrolet Performance. The original transfer case, driveshaft, and axles remain. 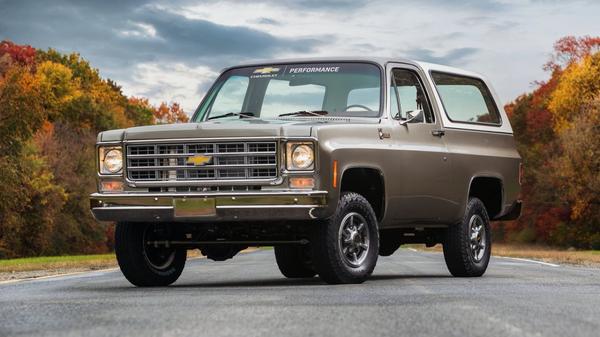 This Blazer has a 400-volt Bolt EV battery pack with 60 kilowatt-hours of usable energy. Production controllers, wiring harnesses, shock protection, battery heating and cooling, battery-overcharge protection, and regenerative braking are all from the Bolt.

The aftermarket components include an electric power steering kit, an electric pump providing vacuum to the stock brake system, and an electronic controller to drive inputs to the vintage gauges – such as displaying the battery’s charge on the original fuel gauge.

Chevrolet Performance is in the process of equipping and certifying Electric Connect and Cruise installers, including dealers and other aftermarket companies. Michigan-based Lingenfelter Performance Engineering will be the first company to pilot the training and certification program.

“As GM introduces a new fleet of electric vehicles, it creates an exciting opportunity to bring EV technology to the aftermarket,” said Jim Campbell, General Motors U.S. Vice President of Performance and Motorsports. “Our vision is to offer a comprehensive line of Connect and Cruise systems from Chevrolet Performance – delivering a solution for every customer ranging from LSX V8s to eCrate conversions.”