RS200 Ford rally Escort car
ZTSG 11/05/2022 New energy 68
Ford's RS200 is in action.At the beginning of the Group B era, when Audi’s Quattro and Lancia’s 037 were the only serious competitors, Ford was developing a new rally contender to replace the successf...

At the beginning of the Group B era, when Audi’s Quattro and Lancia’s 037 were the only serious competitors, Ford was developing a new rally contender to replace the successful rear-wheel-drive Mk II Escort. The Mk II Escort RS1800 was so well suited to rallying that Ari Vatanen took the 1981 WRC driver’s championship in one – surely one of the reasons Audi pushed for more development with their Quattro rally car.

The front-wheel-drive Mk III Escort had debuted in the U.S. and U.K. in 1980, though, and that meant it was time for change. Ford spent three years developing the Escort RS1700T, a 300hp; rear-wheel-drive rally car based on the Mk III Escort, but abandoned the project in 1983 after experiencing many problems in development. They decided to start from scratch and, much like Peugeot, combined the mid-engine layout of the Lancia 037 with the Audi Quattro’s all-wheel-drive, a recipe that seemed destined for success. 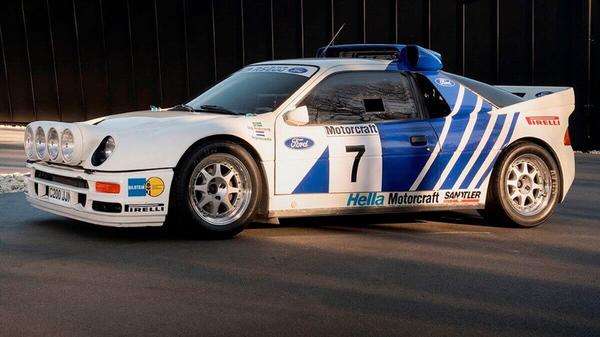 The new car was called the RS200. Its molded fiberglass body was penned by famous Italian design house, Ghia, making it the sexiest of the Group B cars. The famed Cosworth BDT turbocharged 1.8 liter four-cylinder was mounted behind the cockpit in the aluminum chassis and was tuned up to 450hp in full race trim.

The chassis and suspension were designed by two former Formula 1 engineers; it ran a twin damper, double wishbone setup fore and aft and was known for its particularly keen handling. The car was remarkably well balanced, due in part to Ford mounting the transmission in the front of the car to help out with weight distribution, this made the drive train system unnecessarily complicated. Surprisingly, this setup proved fairly reliable.

The RS200 made its WRC debut at the Lombard RAC rally in 1985 as a course opener with Stig Blomqvist behind the wheel. As a course opener, times set on the stages were unofficial, but they were the fastest times of the rally. The car didn’t officially run a rally stage until the International Swedish Rally in 1986, the second rally of the season. Blomqvist lead the snowy rally with his RS200 until the engine died due to extremely cold conditions.

Ford works driver Kalle Grundel picked up where Blomqvist left off, driving his RS200 to a third place finish. Unfortunately this was the first and last time that Ford’s RS200 would take a podium spot in a WRC event. At the very next event, Rally Portugal, Ford driver Joaquim Santos lost control of his RS200, blasting it headlong into a crowd of spectators, killing three and injuring over 30.

Two events later, at the Tour De Corse rally, Henri Toivonen and his co-driver Sergio Cresto burned to death when their Lancia Delta S4 exploded after careening into a ravine at speed. These events as well as Attilio Bettega’s fatal accident in his Lancia 037 led to the FIA banning Group B for 1987, famously declaring the cars were “too fast to race.” Ford and Audi pulled out of competition after the fatal wreck at the Tour De Corse – the RS200 only officially competed in three WRC rallies.

Many feel the RS200 would’ve decimated all competition had Ford had the chance. They’d developed an Evolution model of the RS200 for the 1987 season with upgraded suspension and brake components as well as a reworked Cossie BDT engine which was good for up to 815hp.