Lego Mechanics McLaren Senna GTR: The perfect gift for children of all ages

“The team responsible for the design of the McLaren Senna GTR worked incredibly closely with their design counterparts at the LEGO Group to capture the extreme looks, excitement, and essence of such an incredible supercar for LEGO Technic builders,” said Robert Melville, Design Director, McLaren Automotive.

I was one of those kids that loved LEGOs and any other building toy. If I could make a spaceship one day, then a race car the next with the same materials, I was in. I’m a little less convinced about actual LEGO kits you’re supposed to make into one particular thing. But hey, you can always ignore the instructions and turn those spaceship parts into a cool castle or submarine or submarine/castle or something.

McLaren isn’t the first car company to work with LEGO. I used to have a Ferrari F1 pit stop kit somewhere, and I recall that Ford made a Mustang LEGO kit that was gigantic a while back. So this isn’t exactly new ground, but it is totally cool.

Yes, I do have issues with the McLaren Senna. I know it’s fast, and yeah, it’s named after the best driver of his generation, but the thing looks like a box of axe heads even from the best angles. That’s actually an upside since LEGOs are pretty low-res and can hide a multitude of design sins. 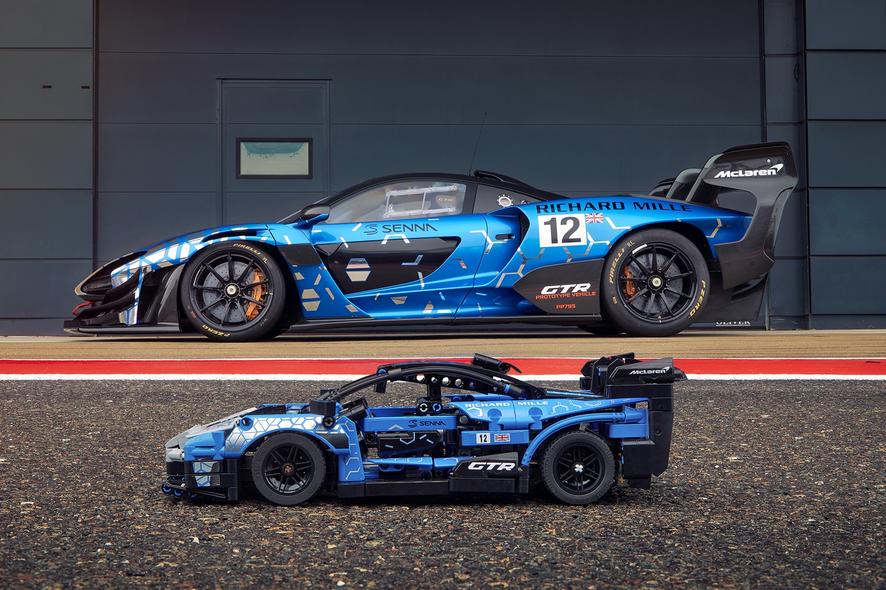 Said LEGO kit clocks in at an impressive 830 pieces and marks the latest venture between the British race and road car manufacturer and the Danish toymaker. There have also been LEGO versions of the McLaren P1, the 720S in 2017, and the road-going version of the Senna in 2019.

Packed with fun features, the LEGO Technic McLaren Senna GTR has such nifty details like a V8 engine with moving pistons, opening dihedral doors, and a one-of-a-kind blue livery. By the time you’re done, it’ll be 12 inches long and look really cool.

“Just like the real thing, the LEGO model is packed full of incredible details from the rear spoiler to the moving pistons in the V8 engine to the dihedral doors meaning that we’re as proud of the model as we are of the real car,” Melville explained.

“Recreating a car that is so extreme to the core as the McLaren Senna GTR with LEGO Technic gave us an incredibly interesting challenge,” added Uwe Wabra, Senior Designer, LEGO Technic. “This track car is not like any road car I’ve worked on before. It’s got some unique details, like its silhouettes and the awesome rear spoiler, which differentiates the building experience from others.”

And if there’s a cooler job than being a race car driver, it’s gotta be “Senior Designer, LEGO Technic.” They pay you to work with LEGOs all day? Sign me up!

The LEGO Technic McLaren Senna GTR will be launched globally on January 1st. It will be available from LEGO.com, LEGO stores, and participating McLaren retailers, with a recommended retailer price of $49,99.

Tony Borroz has been racing antiques and sports cars all his life. He is the author of Bricks &. Bones: The Endearing Legacy and Nitty-Gritty Phenomenon of The Indy 500, available in paperback or Kindle format. Follow him on Twitter Work: @TonyBorroz.