McLaren GT3X 720S amp car
ZTSG 20/02/2022 New energy 224
When a racing company produces road cars, or even better track day cars, it is always worth paying attention to. Of course, one can fiddle with a Honda Civic so they can run on the local track. But wh...

When a racing company produces road cars, or even better track day cars, it is always worth paying attention to. Of course, one can fiddle with a Honda Civic so they can run on the local track. But when someone like McLaren says: "Come on, let us make you a lean angle carver", you better be careful.

In short, that angular, glowing thing you see in your rearview mirror? It might just be a McLaren 720S GT3X. And it might just eat you for lunch.

McLaren has been going great guns lately. I’m not going to get sidetracked by the details, but ever since American Zak Brown took over the company from (very) British Ron Dennis, they sure have been firing on all cylinders. Take the McLaren 720S GT3X as an example. It’s not exactly pretty, but, much like a cobra or a shark, it sure presents itself as being very scary and effective.

McLaren Customer Racing (the in-house branch that sees to keeping well-heeled amateurs and pro-racers equally happy) just rolled out the unrestricted version of the 720S GT3 race car. Dubbed the GT3X, it is for track use only. It’s not homologated, so there’s no real racing class or championship you can enter with the thing, but without the need to comply with competition regs, GT3X owners get to play with increased levels of power and performance and have that much more fun.

Or, as McLaren puts it, the purpose of the GT3X is to “optimize circuit driving enjoyment.” Is that what the kids are calling it these days? 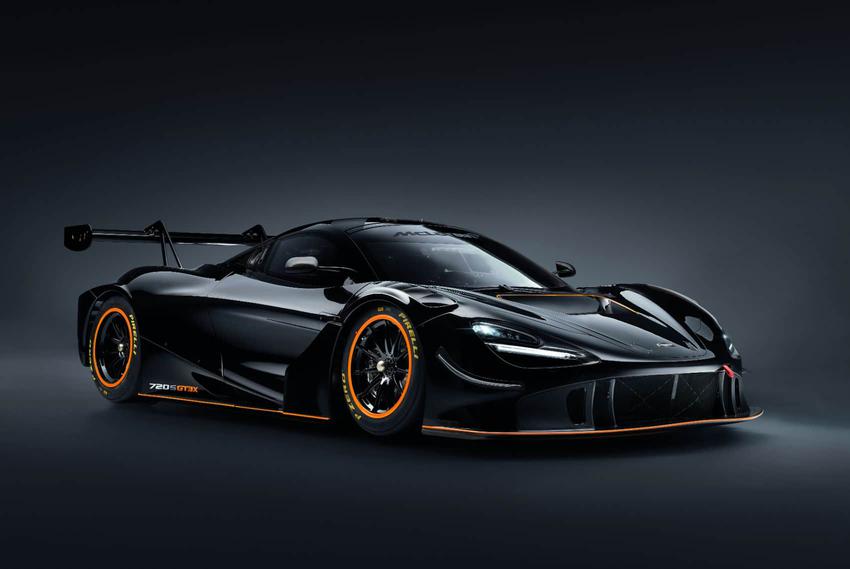 The McLaren 720S GT3X features a light and strong carbon fiber chassis utilizing the MonoCage II design, underpinning the current 720S. Weight? Dig this: The 720S GT3X tips the scales at just 2,668 lbs., more than 440 lbs. lighter than the road-going 720S on which it is based. That’s only about 400 lbs. more than the latest Miata! McLaren hit those weight targets by dropping all non-essential or luxury items. Bottom line: The 720S GT3X has a power-to-weight ratio of 587 bhp-per-ton.

Of course, McLaren seriously worked the aero over. That’s what you do when you have an F1-grade wind tunnel and a Computational Fluid

Dynamics server farm that has its own cooling plant. The aerodynamically sculpted shape of the 720S GT3X is hand-finished in metallic MSO Carbon Black paint with a pinstripe in heritage McLaren (papaya) Orange. And that X graphic? That stretches across the upper canopy and looks super cool.

Motive power comes from the familiar 720S engine, but the plant has been seriously reworked with features from the road and track variants. The hand-built 4.0-liter twin-turbo V8 is unique to the GT3X. It includes a blueprinted cylinder head, upgraded pistons, Diamond-Like (DLC) technology, and a performance exhaust system. All up, that’s good for 710 bhp, with a further 30 bhp boost function available through a steering wheel-mounted button. All that power is routed through a six-speed sequential motorsport transmission (by which I’m betting they mean it’s a full-on dog box).

Also on the weight loss program is the stripped-out cabin with its extensive use of carbon fiber, including the carbon fiber and Kevlar FIA-approved race seat that weighs just 22lbs. The seat does not adjust, but the pedal box and steering wheel do for the perfect driving position. All essential functions are controlled via rotary switches and buttons on the steering wheel.

Wanna scare the bejeebers out of your friends? You’re in luck. The 720S GT3X can hold a safety passenger race seat, complete with a six-point race harness.

You get more than just a track car when you buy a McLaren 720S GT3X, however. As part of the purchase and ownership package, you receive dedicated technical support carried out by the customer support engineers from the in-house McLaren Customer Racing division.