Lotus Certificate Provenance car Esprit
ZTSG 17/04/2022 New energy 114
Lotus has decided to join the recent trends of many automakers and start their own internal factory certification program. Okay, program, if you are British. Essentially, the Lotus provenance certific...

Lotus has decided to join the recent trends of many automakers and start their own internal factory certification program. Okay, program, if you are British. Essentially, the Lotus provenance certificate is used to verify the provenance or background of your Lotus car. The car that made its debut happened to be a lovely 1981 Turbo Esprit, certified as the last "company car" of Lotus founder Colin Chapman.

Getting a Lotus Certificate of Provenance

Inside the box, you’ll find a bunch of goodies. First, there’s the Certificate of Provenance itself, which is printed on premium paper. The certificate provides a summary of the car’s details, such as the VIN, paint color, and specifications.

The certificate also notes the date on which the car completed its production at the Hethel factory and was passed out of the gates and onto the Lotus sales team. You’ll also find a Build Specification Letter. This shows detailed vehicle information from the Lotus archive and gives a more in-depth picture of your Lotus, including its engine, transmission, standard features, and optional extras. The third document is a personalized letter signed by Phil Popham, CEO of Lotus Cars, thanking you for your purchase. 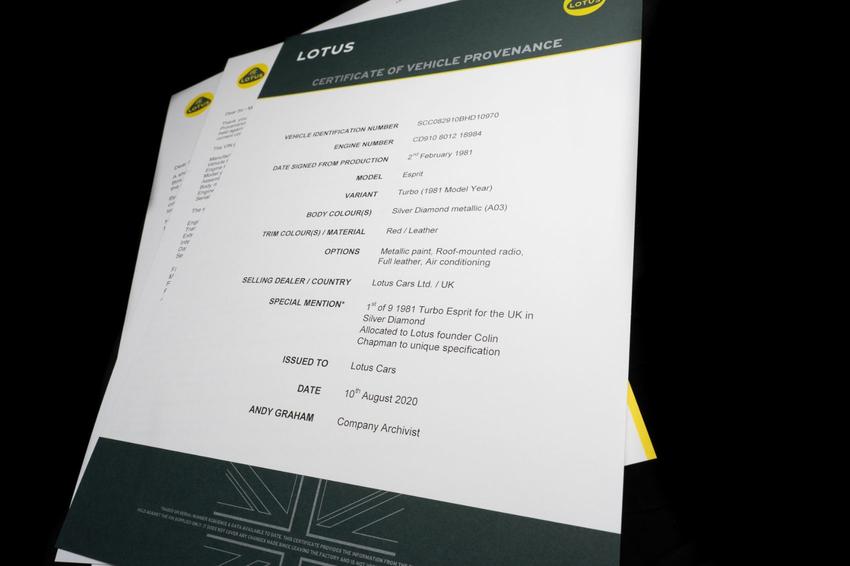 The three documents are presented in a simple black envelope placed inside the presentation box, which, you’ve got to admit, sounds pretty classy. Underneath that black envelope is a selection of Lotus collectables: an aluminum plaque engraved with the owner’s name and information from the Certificate of Provenance; a leather Lotus keyring; a carbon fiber bookmark featuring the brand’s nine most significant motorsport laurels; a presentation tin of four badges; and a Lotus ink pen.

Now, about the first car to get a Lotus Certificate of Provenance. The 1981 Lotus Turbo Esprit has the UK registration plate UVF 464X, as number plates in England stay with the car throughout its life. So tracking this is a bit of a “big deal” for British gearheads. (Interesting side note: The other term for gearheads here in America is usually motorheads. In England, they use the term petrolheads, because “motorhead” refers to amphetamine freaks. Might want to remember that if you find yourself in polite conversation with one of Her Majesty’s subjects.)

The Turbo Esprit was registered to the company on August 1st 1981, then allocated to Chapman for his exclusive use.

The car is finished in metallic Silver Diamond along with the very chic “Turbo Esprit” decals. Factory-fitted optional extras include a full red leather interior, air-conditioning, and a Panasonic audio system integrated into the headliner. Several features were added at the request of Chapman, including power steering – it was the first Esprit ever to have this technology – plus a modified and lowered suspension, modified brakes, and BBS Mahle lattice alloy wheels.

Getting a Lotus Certificate of Provenance

If you own a Lotus or are friends with someone who owns one, getting a Lotus Certificate of Provenance sounds like a great idea. The Certificate of Provenance is available worldwide through Lotus retailers, so there’s no need to schlep to Jolly Olde England. And get this, it costs £170 in the home market, or around $250. Prices may vary a little from country to country, but that’s still a good deal.