You won't believe this Lamborghini Sián made entirely of Lego bricks!

LEGO Lamborghini Technic model Automobili
ZTSG 11/01/2022 New energy 200
When I was a kid, I often looked at Hot Wheels or Matchbox cars or Lego pieces I made, and thought, "It would be cool to climb inside and drive away!" Obviously, I Not the only one who thinks so, beca...

When I was a kid, I often looked at Hot Wheels or Matchbox cars or Lego pieces I made, and thought, "It would be cool to climb inside and drive away!" Obviously, I Not the only one who thinks so, because it is obvious that when it comes to this life-size Sián, many people have the same idea. Automobili Lamborghini worked with the Lego Group to create a life-size replica of the Sián FKP 37, but I couldn't find any information about it actually being able to drive (unfortunately). Now this is great! But it is still very cool in itself.

I’m not that much of a stats guy because I think ultimately you can’t make “fun” into an equation, and cars can be “fun” beyond what their stats say. That said, stats can also be fun in the right context, and, no kidding, check out these stats for the LEGO Lamborghini Sián: over 400,000 LEGO Technic elements (that’s what LEGO Group calls “pieces”) running across 154 different element types, including 20 molded specifically for this project. All these elements combine for an all-up weight of 2,200 kg (4,850 lbs.) that is dimensionally accurate down to the millimeter. 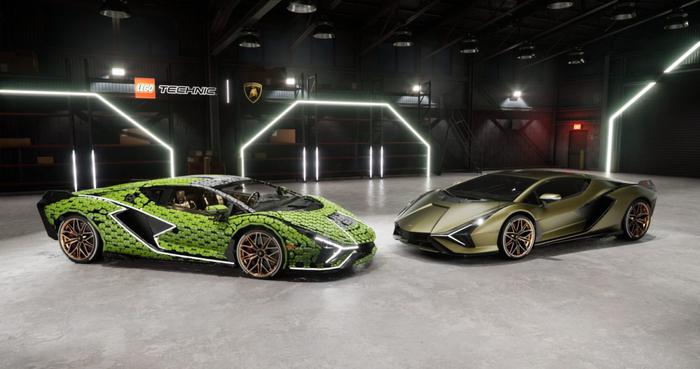 At any rate, Lambo did the full-scale Sián after the 1:8 scale LEGO Technic Lamborghini Sián was such a hit. That’s as good a rationalization as I would need to mess around with nearly half a million pieces. That is, assuming I had the time. The big LEGO Sián took a team of 15 people 8,660 hours of development work and meticulous construction. As I said, the LEGO version is right down to the millimeter: 4,980 mm long, 2,101 mm wide, and 1,133 mm high.

“Our designers love a challenge, so you can imagine their delight when we tasked them to think slightly larger than

normal with this model,” said Lena Dixen, Senior Vice President of Product and Marketing at the LEGO Group. “They jumped at the chance of teaming up with our amazing designers and engineers who build these impressive life-sized models at our Kladno factory’s model production workshop in the Czech Republic, and really pushing the boundaries of what can be done with LEGO Technic.”

Lamborghini and LEGO also went crazy-wild with all the little details too. There are lights built from Technic elements, and a sleek lightning bolt flash along the body (Sián’s means flash or lightning in Bolognese). The epsilon headlights and hexagonal taillights power up and down. They even included racing seats, dash controls, and a “brick-built” steering wheel with the Lamborghini emblem and Italian flag. This is also the first large-scale model from LEGO to have a paintbrush-effect UV color coating that matches the 1:8 scale Technic model.

If you’re interested, you can sit virtually in the driver’s seat and hear from Lamborghini and LEGO designers who made this model a reality. It’s not as nearly as impressive as driving it would be, but it’s still a pretty sweet experience.

“Lamborghini is a dream for people around the world, and LEGO products provide creative inspiration for millions,” said Stephan Winkelmann, President and CEO of Automobili Lamborghini. “We’re delighted to have collaborated on this unique edition of the Lamborghini Sián that will catch the imagination of Lamborghini and LEGO fans alike.”