2022 Cadillac CT4-V and CT5-V Blackwing: End the gasoline era with a huge explosion

Blackwing Cadillac CT5 CT4 inch
ZTSG 02/09/2021 Sedan 241
We know that Cadillac is creating a storm with its latest Blackwing models 2022 CT4-V and CT5-V Blackwing. However, we did not expect Blackwings to scare BMW M5 or M3 owners, or make the sweet Alfa Ro...

We know that Cadillac is creating a storm with its latest Blackwing models 2022 CT4-V and CT5-V Blackwing. However, we did not expect Blackwings to scare BMW M5 or M3 owners, or make the sweet Alfa Romeo Giulia Quadrifoglio fight for cash.

Cadillacs At The Track? Yes, Sir!

Iron Fist In a Velvet Glove

Don’t be misled by the name change, either. There’s no denying the CT5 is an evolution of the CTS-V. All you need to know is Blackwing connotes the very pinnacle of Cadillac performance vehicles, drawing inspiration from Cadillac’s CT6 and CT6-V. On a rather blissful note, both the CT4-V Blackwing and CT5-V Blackwing are the last of Cadillac’s highest-performing gasoline engines, particularly the CT5-V Blackwing’s ferocious supercharged 6.2-liter V8.

“V-Series Blackwing stands for the very highest level of execution from Cadillac and offers a distinctly American vision of performance: incredible power and luxurious craftsmanship, with absolutely zero compromises,” said Brandon Vivian, Executive Chief Engineer, Cadillac. “We looked to our championship-winning racing heritage and brought an uncompromising eye for detail to create two cars that elevate the V-Series experience.”

We’re not saying the V-Blackwing is dead. You can think of the CT4-V and CT5-V Blackwing as the torchbearers of good ol’ gasoline-ignited power. When it returns (probably sooner than you think), Cadillac Blackwing models will be all-electric, and you can bet they will have more power than you can shake a stick at.

Let’s start with the 2022 CT4-V Blackwing, the latest from Cadillac to rival the German powerhouses from the AMG and M divisions. It has a 3.6-liter twin-turbo V6 with 472 horsepower and 445 lb-ft. of torque, with the engine shifting gears through a standard TREMEC six-speed manual. The gearbox has upgraded internals to handle the extra grunt.

The rear-wheel drivetrain has an electronic limited-slip differential and an optional 10-speed automatic that if, for some strange reason, you find it arduous piloting a Cadillac sports sedan with frequent left-foot action. In return, an automatic-equipped CT4-V Blackwing scorches from zero to 60 mph in 3.9 seconds (4.1 seconds with the manual), so there’s a good reason to ponder over the 10-speed automatic.

“The openings in the grilles are larger to direct airflow to the multiple radiators, as well as the brakes,” explained Josh Thurber, Exterior Design Manager, Cadillac. “It’s all functional, and it contributes to a purposeful, racing-inspired look.”

Don’t get us wrong. The CT-4 V Blackwing has enough mojo to stir the loins, but we find it hard to appreciate its magnificence in the presence of the CT5-V Blackwing, the last of a dying breed. Conservationists shed a tear or two when a species goes extinct, but we’re grasping for a Kleenex as we view the CT5-V Blackwing through rose-colored spectacles. 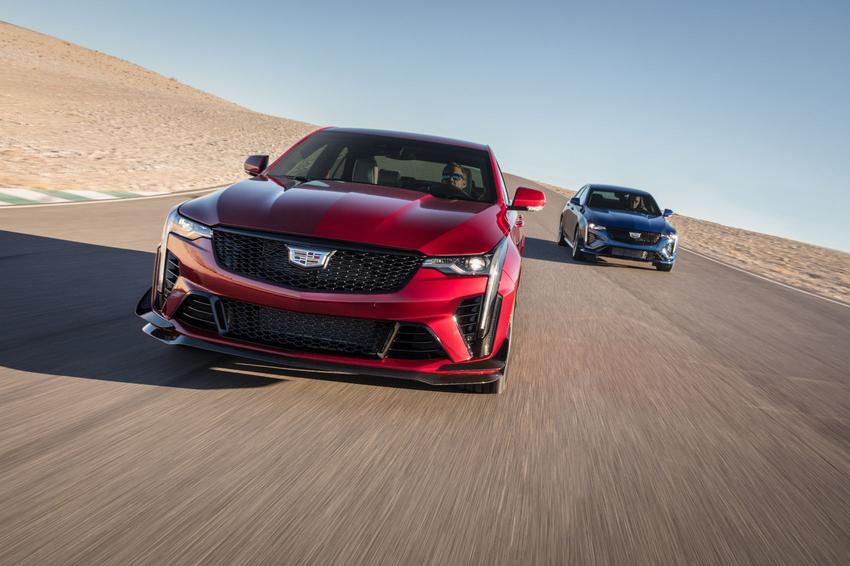 And how could we not? It has a 6.2-liter V8 engine breathing through an Eaton four-lobe supercharger. The blower has the same 1.7-liter displacement as the outgoing CTS-V (which has the same V8 engine, as well), but the supercharger has smaller rotors that spool faster to improve throttle-pickup and engine response.

vette assembly plant in Bowling Green, Kentucky, by a single technician from start to finish, with each motor getting a signed plaque from its creator. The engine’s exotic internals include Rotocast A356T6 aluminum cylinder heads, lightweight titanium intake valves, and a wet-sump oiling and vent system.

There’s a catch. Cadillac claims a zero to 60 time of 3.4 seconds with an automatic-equipped CT5-V Blackwing. It’s not enough to claim bragging rights from a 2021 BMW M5 at the next set of stoplights, and it’s just as quick as the outgoing CTS-V with less power from its supercharged V8 motor.

The standard TREMEC TR6060 manual gearbox will be slower (zero to 60 mph: 3.6-seconds), but that’s not the point. Equipped with a Luk twin-disc clutch, active rev-matching, and no-lift-shift capabilities, the CT5-V Blackwing is sure to be a blast, what with a screaming supercharged V8 dumping power to the rear wheels. Meanwhile, the top speed is above 200 mph.

Cadillacs At The Track? Yes, Sir!

The CT4-V Blackwing is the fastest and most powerful Cadillac of its kind. Similarly, the CT5-V is the most powerful Cadillac ever built. Both vehicles feature upgraded chassis and suspension components, including hollow stabilizer bars, stiffer springs, and Cadillac’s brilliant Magnetic Ride Control (MR 4.0) dampers.

Yes, you bring your Caddy to the track with its fourth-generation legs. We can talk about the nerdy details all day, but Caddy’s magnetic suspension is the world’s fastest reacting suspension technology. It’s capable of cradling you in luxurious comfort or delivering taut, sportier handling when you need it most.

On the track, power is useless if you can’t stop on a dime, and Cadillac knows this well. The CT4-V Blackwing has 14.96 x 1.34-inch front and 13.4 x 1.1-inch rear brake rotors. Six-piston Brembo front and four-piston rear calipers are standard, while the CT5-V Blackwing gets the same Brembo brakes grasping larger 15.97 x 1.42-inch front and 14.7 x 1.1-inch rear rotors, the largest ever fitted to a production Cadillac. Optional to the CT5-V Blackwing are Brembo carbon-ceramic brakes that reduce unsprung weight (53 lbs./24 kg) and rotating mass (62 lbs./28 kg).

Iron Fist In a Velvet Glove

Cadillac’s newest Blackwings may be a hoot on the track, but neither are lacking in the comfort and tech department. There’s a 12-inch diagonal HD instrument cluster with specific Tour, Sport, and Track graphics along with a performance data recorder and a heads-up display. Heated and leather-wrapped performance seats with a driver’s memory setting are standard, and the cabin has more carbon-fiber trim than you can count.

The 2022 Cadillac CT4-V Blackwing has base prices starting at $59,990, while the CT5-V Blackwing begins at $84,990 (including $995 destination fees). Cadillac immediately sold out the first 250 units in record time, but both Blackwings are still on sale with limited availability. Grab one (or two) while you still can!