Audi tron concept electric cars
ZTSG 17/11/2021 Sedan 217
The Audi A6 e-tron concept car made its debut at the 2021 Shanghai Auto Show. I am very fascinated by the Audi concept car. The brand is used to showing 90% to 95% of concept cars ready for production...

The Vorsprung Durch Technik tagline is responsible for the high-tech persona of modern Audi vehicles. In English, it means Advancement Through Technology and was first utilized in Germany in 1971 by Audi. It not only gave Audi cars a mythical space-age aura, but Audi’s Vorsprung Durch Technik advertising campaign in the mid-80s, which came about nearly by happenstance, captured the world’s imagination.

In a way, the new Audi A6 e-tron concept embodies the very essence of Vorsprung Durch Technik. It not only looks good, but the car is oozing with a modern appeal that may change the way you see Audi as a brand.

Audi was among the first premium German automakers to release an all-electric model with its conventional-looking e-tron SUV, e-tron Sportback, and e-tron GT in 2020. However, all three are riding on a new technology platform jointly developed with Porsche. Audi also recently released the Q4 e-tron and Q4 Sportback e-tron, two all-electric crossovers underpinned by parent company Volkswagen’s MEB platform.

With that in mind, the Audi A6 e-tron concept is the first to utilize the brand’s PPE or Premium Platform Electric architecture. Initially conceived for C-segment (medium size) electric vehicles and co-developed with Porsche under Audi’s leadership, PPE will underpin future B-segment and D-segment electric vehicles.

Audi claims the first production vehicles built on the PPE platform will start arriving in the second half of 2022, including SUVs and CUVs with higher ground clearances and cars with a lower ride height. I’m not a betting man, but all signs point to the Audi A6 e-tron’s debut in mid-2022. And when it does arrive, it will most likely look identical to the concept you see here. 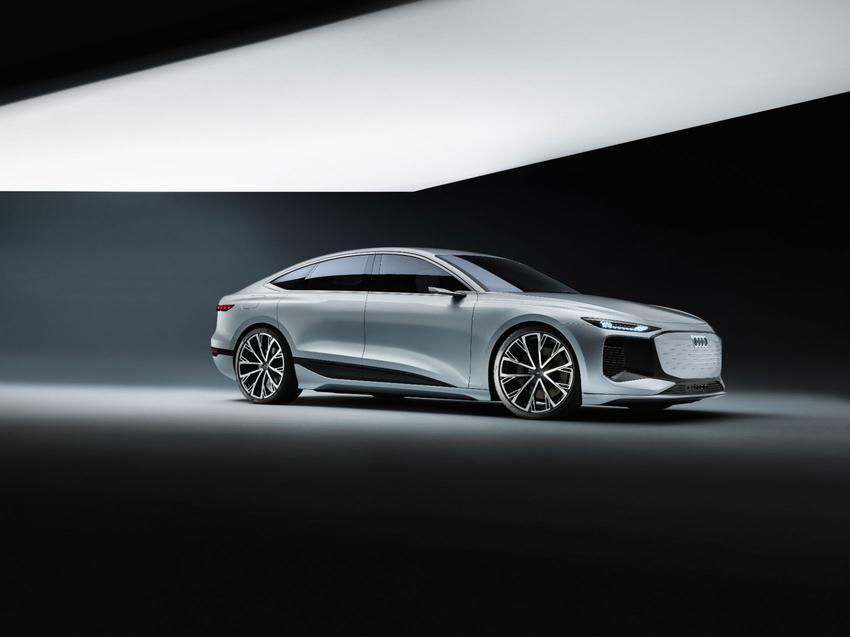 In Audi’s words, the A6 e-tron concept is more than just a simple design exercise. Instead, the concept’s slender shape is a “foretaste of Audi’s future production models and provides clear indications of just how dynamic and elegant the electric-powered luxury class from the brand with the four rings will look,” said the automaker.

The concept is a Sportback with a ridiculously sloping roofline. Measuring 4.96 meters long, 1.96 meters wide, and 1.44 meters in height, it’s almost the same size as a st

andard A6 or A7 sedan. It has muscular proportions, short overhangs, and smooth transitions from one line to the next.

Aerodynamics was an essential factor in designing the A6 e-tron’s body. The result is a class-leading drag coefficient of just 0.22 Cd. Granted, the 2022 Mercedes-Benz EQS luxury EV remains the king of aerodynamics with a segment-leading 0.20 Cd, but the Audi can hold a candle to the Benz in aero efficiency.

The Audi A6 e-tron has the slimmest pair of headlights in the carmaker’s history. It’s a Digital Matrix LED unit capable of cinematic quality lighting. If you park the car in front of a wall, the driver and passenger can play video games projected by the headlights on the wall. It all sounds otherworldly, but concept cars are supposed to be that way. The point is those damn headlights are so good that they can project video games to a wall.

At the rear, it has digital OLED taillights that act as a display screen. Audi said customers could pre-set the lighting signatures and lighting display, a brilliant feature in customizing your future electric car. Oh but wait, there’s more.

The Audi A6 e-tron has four hidden high-resolution projectors on all four corners to generate turn signal projections on the ground, enabling the vehicle to communicate with other road users using visual signals. It also has three high-resolution LED projectors on each side of the body to create theatrical lighting effects when the doors are opened or closed.

The A6 e-tron concept has two electric motors suspended by a five-link front axle and multi-link rear suspension with air springs and adaptive dampers. Audi claims 469 horsepower and 590 lb-ft. of torque and zero to 60 mph in under four seconds.

It has a 100 kWh battery pack on the floor, with enough juice to travel up to 435 miles on the WLTP cycle. Of course, expect the EPA numbers to be lower, but the batteries support DC fast-charging up to 270 kW. That’s enough power to add 180 miles of range in just 10 minutes, Audi said.

It’s only a concept for now, but Audi has a history of bringing concept cars to life. We may have to wait a year or two for the production-ready A6 e-tron to arrive at Audi dealerships. But with the way things are going – new EVs are coming in thick and fast – accelerating the A6 e-tron for production is not a terrible idea.