The 2017 S90 is built on Volvo’s new Scalable Product Architecture (SPA) which it shares with the XC90 crossover. The overall design of the S90 is heavily influenced by the Volvo Concept Coupe, which appeared in the 2013 Frankfurt International Auto Show.

Up front, the “Thor’s Hammer” LED headlights from the XC90 and the Concept Coupe are carried over to the S90, thus establishing the new, corporate look for Volvo’s future products. The side profile of the Volvo S90 offers a clean, elegant design with an overall luxurious and well proportioned look. The back of the S90 features the same taillight design first seen on the Concept Coupe, but has been slightly modified to comply with production vehicle regulations. Like previous Volvo sedans, the decklid spells out the Volvo name and indicates which engine can be found under the hood.

The elegant and upscale interior of the XC90 is carried over to the S90 sedan with minimal changes. The cabin features a luxurious combination of high-quality leather, beautiful and rich wood grain, and polished and elegant metal trim. The center of the dashboard is dominated by Volvo’s Sensus Infotainment touchscreen, which controls most of the vehicle’s function while eliminating many hard keys.

That helps simplify and de-clutter the interior layout.

The recent release of the XC90 was essential to Volvo’s vision that nobody should be killed or seriously injured in a new Volvo by 2020. As 2020 quickly approaches, expect the 2017 S90 to feature most, if not all, of the semi-autonomous safety technologies found in the XC90. 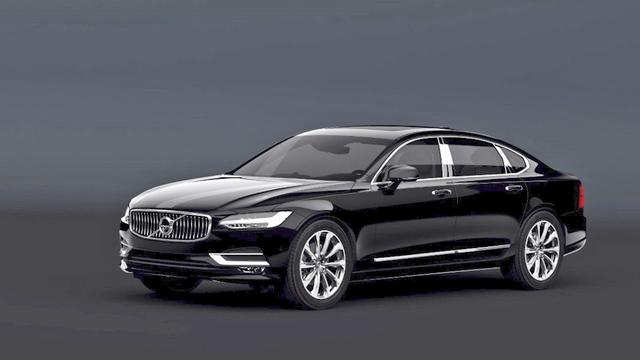 When the 2017 Volvo S90 arrives on our shores, American consumers will be able to choose from three different four-cylinder powertrains.

The top-of-the-range S90 T8 features the same turbocharged and supercharged 2.0 L I-4 found in the S90 T6, but here it is aided by a plug-in hybrid system. When combined, S90 will produce 400 horsepower and 472 lb.ft. of torque.

An eight-speed automatic transmission will be standard across the range and all-wheel-drive will be available on all models except the base S90 T5.

American customers should be able to order their Volvo S90 shortly after the vehicle’s debut at the beginning of the year. The first batch should be arriving at Volvo retailers in early summer 2016.

*Rahul Raman is the Founder of CARS 360 Mke, an automotive news outlet. He is a regular contributor to Automoblog.net and the author of our First Look series.