Home > Sedan > From Porco to speedboat: 10 interesting facts about Mercedes-AMG

From Porco to speedboat: 10 interesting facts about Mercedes-AMG

AMG Mercedes Black engine Series
ZTSG 28/12/2021 Sedan 311
Did you know that AMG is the abbreviation of the founder’s last name and the place where the company was originally established? Who would have thought that Mercedes-AMG started in the 1960s with a si...

Did you know that AMG is the abbreviation of the founder’s last name and the place where the company was originally established? Who would have thought that Mercedes-AMG started in the 1960s with a simple two-person operation? From humble beginnings to becoming a respected global performance brand, here are 10 interesting facts about Mercedes-AMG.

#3: Mercedes-AMG in the USA

#8: From Großaspach to Affalterbach

As previously mentioned, the AMG moniker is derived from the surnames of company founders Hans Werner Aufrecht and Erhard Melcher. The G stands for Großaspach, the birthplace of Aufrecht. Incidentally, Aufrecht and Melcher were working on a racing engine for the 300 SE sedan while employed in the Development Department at Daimler-Benz in the 1960s.

However, everything came to halt. Daimler-Benz decided to end all Motorsports activities, but this didn’t deter the two men from developing their racing engine at Aufrecht’s house in Großaspach. In there, Aufrecht and Melcher created something special.

In 1965, a former colleague at Daimler-Benz signed up for the German Touring Car Championship. Manfred Schiek won the event ten times using the 300 SE engine that Aufrecht and Melcher developed at home. This not only cemented the reputation of Aufrecht and Melcher as brilliant engine builders, but it also led to the eventual formal partnership of AMG with Mercedes-Benz.

The first AMG vehicle was not a fire-breathing supercar or convertible, but it comes close. The Mercedes-Benz 300 SEL 6.3 is a full-sized luxury car built from 1968 to 1972. It came with a majestic 6.3-liter V8 engine to make it the fastest four-door car in its heyday with 247 horsepower and 369 lb-ft. of torque.

But for Aufrecht and Melcher, it was not enough. The men soldiered on by increasing the motor’s displacement to 6.8-liters. After all was said and done, the engine was producing 428 horsepower and 448 lb-ft. of torque. The vehicle underwent a massive weight loss program to make the most of its newfound power, but it was still the heaviest car on the grid when it debuted at the 24 Hours of Spa in 1971.

That car, which is now famously referred to as the Red Pig, secured a class win and placed second overall at the 24 Hours of Spa. From then on, the AMG name became well-renowned in the Motorsports arena.

#3: Mercedes-AMG in the USA

The first jointly developed vehicle from Mercedes-Benz and AMG was the C 63 AMG in 1995. It became the first AMG car to be officially sold in the United States. It had an extensively modified inline-six engine with 276 horsepower and 284 lb-ft. of torque mated to a five-speed automatic transmission.

Daimler eventually acquired a majority stake in AMG in 1998. 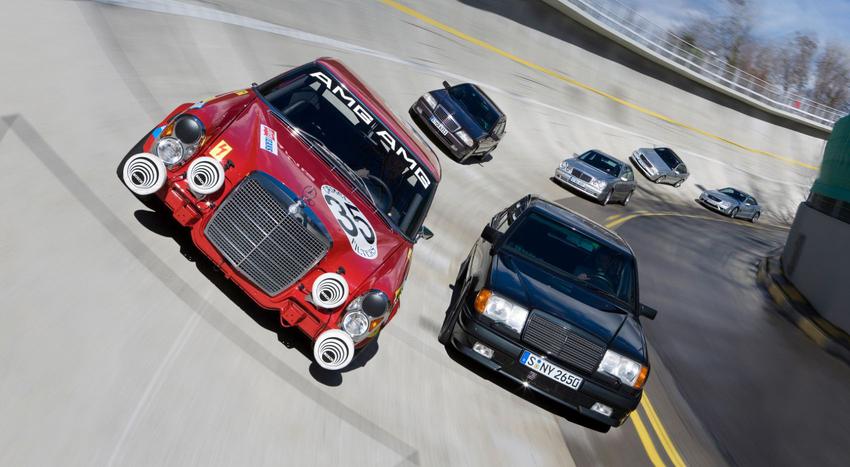 For buyers who want the wildest and most exclusive AMG high-performance vehicle, the Black Series is a perfect choice. AMG Black Series models are dialed to 11 and have exceptionally modified engines, suspension systems, aerodynamic components, a

The first Mercedes-Benz vehicle developed from the ground up by AMG is the SLS AMG, the reincarnation of the iconic 300 SL Gullwing from 1954. It came with a burly 6.2-liter V8 engine with 622 horsepower, but that wasn’t the car’s only explosive force. Literally.

The SLS AMG has exploding capsules on the roof. Apparently, the mini-explosion is strong enough to blow off the doors if the vehicle were to flip on its roof.

AMG’s passion for speed is focused primarily on road-going vehicles, but the company has kept a strong relationship with the Cigarette Racing Team since 2007. This unique partnership has resulted in no less than 12 limited-edition high-performance racing boats, the latest being the 59-foot Tirranna AMG Edition showcased in Miami in early 2020.

The Tirranna AMG Edition by Cigarette Racing has six outboard V8 engines with a combined 2,700 horsepower. It has a top speed of 80 mph (pretty fast for a boat) and is large enough to ferry 26 passengers in the utmost luxury.

All AMG engines are built using the “One Man, One Engine” philosophy. This means a single craftsman is responsible for assembling each AMG engine by hand from start to finish. Every finished motor is given a special plaque signed by the builder that is bestowed on the engine after completion.

#8: From Großaspach to Affalterbach

Mercedes-AMG is headquartered in a small town northeast of Stuttgart in Affalterbach, Germany. The company employs about 1,800 people to handle the sales, management, administration, development, and design of AMG vehicles. It is also in Affalterbach where each handcrafted AMG engine is built.

Mercedes-AMG is all about utilizing the best technology to deliver exceptional performance. The AMG Dynamic Select feature is one such example. Using this feature, drivers can easily alter between various modes to enhance the car’s on-road behavior. From Comfort to Sport or Race, you can tune your AMG vehicle on the fly by pressing a toggle button.

The title of the most powerful AMG vehicle ever produced (for now) goes to the Mercedes-AMG One hypercar. Utilizing the latest in Formula 1 hybrid technology, the Mercedes-AMG One is capable of producing 1,000 horsepower. It goes from zero to 124 mph in under six seconds and has a top speed of 217 mph.

Mercedes-AMG is only building 275 units with base prices starting at an eye-watering $2.7 million. Production was initially delayed in 2019, but Mercedes-AMG is set to make the first deliveries in 2021.

Alvin Reyes is an Automoblog columnist and an expert in sports and high-performance cars. He studied civil aviation, aviation and accounting when he was young, and is still fascinated by his previous Lancer GSR and Galant SS. He also likes fried chicken, music and herbs.