Inside the BMW optical measuring unit

BMW optical measuring cell vehicle
ZTSG 29/01/2022 Sedan 264
When we look at the world, it is easy to see the evolution of technology. I am a person who often says "what will they think next". I really like the progress of science, engineering and technology in...

When we look at the world, it is easy to see the evolution of technology. I am a person who often says "what will they think next". I really like the progress of science, engineering and technology in the entire automotive industry.

One such advancement comes from BMW and their pilot plant in Munich, Germany, where an optical measuring cell resides. Automakers use different 3D rendering techniques when developing vehicles but BMW goes a step further, incorporating something often found in assembly plants today: robots.

In BMW’s optical measuring cell, robotic arms use senors to generate a 3D image and data model of a vehicle. This detects even the slightest deviations early on – the accuracy of the process is less than 100 micrometers. These optical measuring cell exercises are utilized between development and full blown production as part of BMW’s digital strategy. The initiative is directly linked to their high standards for vehicle production and overall quality.

The next generation 5 Series Sedan will be the first production vehicle to enter the optical measuring cell.

“We are delighted to reach this genuine milestone in pre-production with the optical measuring cell,” said Eduard Obst, Head of Geometric Analysis, Measuring Technology and Cubing, Total Vehicle, BMW Group. 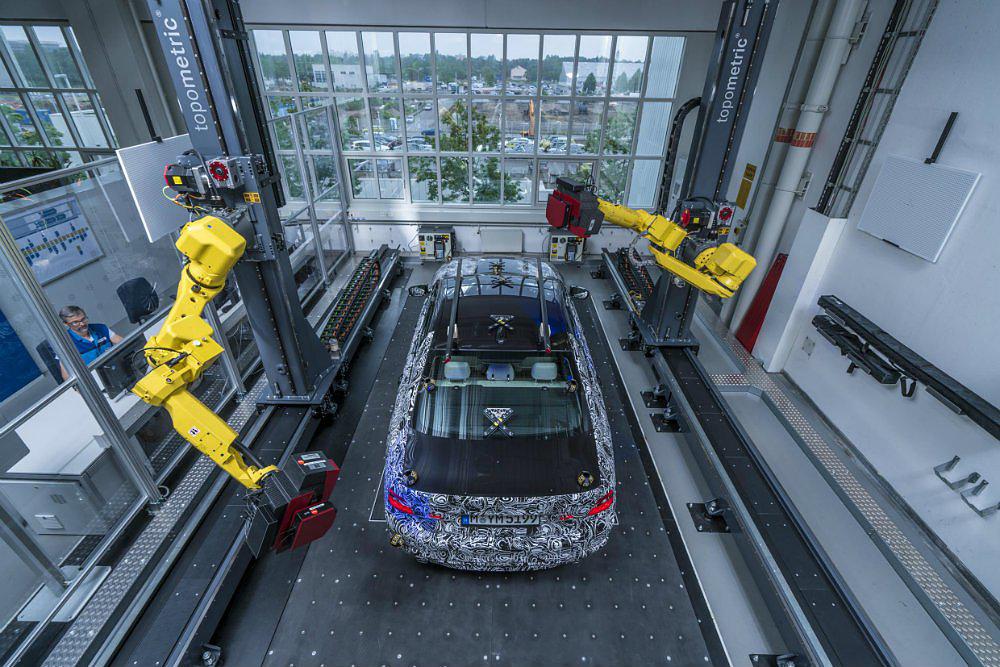 Two robots, mounted on each longitudinal axis of the optical measuring cell, work in unison to cover the entire vehicle. Their movements are flexible and free flowin

g; what BMW refers to as “optimum working range.” The robots have two sensors that record reference points and capture individual surface areas of approximately 80 x 80 centimeters each. These are then combined for a more complete picture of the vehicle where deviations are quickly spotted. Technical Integration Specialists from BMW’s Production Division can then correct said deviations early on.

In prior setups, robots used a single sensor, scanning one side of the vehicle, then the other. With the second robot, measurements take about half the time and are usually completed in a few days.

“Lengthy individual measurements and data collation are no longer needed – saving time and enhancing quality at the start of series production,” Obst said.

Since the optical measuring cell is fully automated – and since the robots never sleep – the process can be performed at all hours of the night. With the cells running at full capacity, data delivery is more timely, and thus, more readily shared with BMW’s production network and assembly plants. This process is becoming increasingly important within BMW as better preparations can be made to accommodate a vehicle’s production.

A similar process is already successful in Munich for sheet metal and tools. Given the accuracy of the robots and the impact on quality control, it’s no wonder BMW is considering these optical measuring cells for their facilities worldwide.