Home > Sedan > Lamborghini Terzo Millennio: When the crazy Italian is with the super geek

Lamborghini Terzo Millennio: When the crazy Italian is with the super geek

For me, Lamborghini Terzo Millennio is a typical example of Lamborghini’s Achilles heel for decades: styling. Since Countach, Lamborghini has basically given up any sense of elegance or elegance to their cars, and instead pursues brutal presence, tough edges and gorgeousness through all the subtleties of a 25-minute heavy metal guitar solo.

Automobili Lamborghini got together with not one, but two laboratories at the Massachusetts Institute of Technology (aka MIT) and asked, in so many words, “hey, what would a possible future Lamborghini electric super sports car be like?”

The answer is this: The Lamborghini Terzo Millennio. A car that looks like something a 13-year-old would draw on the back of his notebook.

Breaking Down The Beast

MIT, the Massachusetts Institute of Technology, is arguably the best engineering school in the known universe (that’s right Vulcan Science Academy, you heard me). You know the MIRV, the Multiple Independently Targetable Reentry Vehicle for atomic warheads? That was dreamed up and invented at MIT. By graduate students. Stroboscopic photography? That was invented, single-handedly, by Harold “Doc” Edgerton, an MIT professor who taught freshman chemistry.

The people that roam the halls and wander the MIT campus sit at the top of the Everest of geekdom. You ask MIT for “help” on your transportation project, and a byproduct might turn out to be a mass-driver that can sling ore from the asteroid belt back to planet Earth.

And Lamborghini, bless their hearts, decided to ask, and the result is the Terzo Millennio which, styling aside, packs about as much performance as a cruise missile on final approach. Bear witness.

Breaking Down The Beast

At its heart, this is a moon-shot of a car. If it happens at all in anything close to what we see here, it will happen many years (decades) down the road. Lamborghini flat-out states: “The concept physically imagines design and technology theories of tomorrow.” Theories? Wow, equivocate much? Lamborghini has chosen to focus on five different dimensions: energy storage systems, innovative materials, propulsion, visionary design, and emotion. Or, to put it in layman’s terms so you don’t have to be Florence LaRue: where the fuel goes, what it’s built from, how that fuel is dispensed to the tarmac, what it looks like, and . . . er, emotion? Really, they went with emotion? What does that even mean? 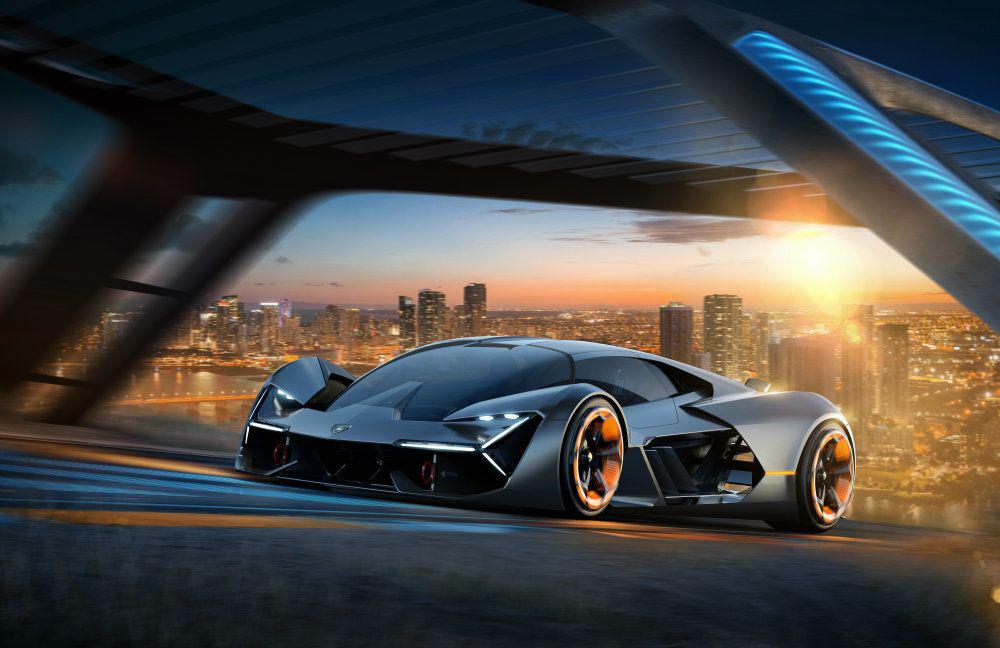 THUS SPAKE LAMBO!!: “The strategy of creating super sports cars with uncompromising performance generates Lamborghini’s motivation to revolutionize the approach to . . . SAVE ME!!! SAVE ME!!! Please don’t make me read this stuff. No need to get lost in all that MarComm drivel. The Energy Storage System, effectively the gas tank is a, in one word, supercapacitor. Which is (I hear some of you asking) just like yer run of the mill capacitor, only super. Essentially, a battery that is quick to discharge, quick to charge, and holds “enough” stored energy to “practically” use. Think of a much larger electric go-kart with a bodyshell and a license plate.

What is it built from? Answer: cloth and glue (aka carbon fiber). Cloth and glue that are used all over the place in structures and parts and the bodyshell, and also in interesting ways: like that same bodyshell acting as an accumulator for energy storage. Swift, eh? Lambo and MIT closely monitor the bodyshell to look for and predict cracks and structural failures, and self-fix them via micro-channels filled with “healing chemistries.”

To which I say, that’s cool and all, but couldn’t you just make the skin a little thicker and a little tougher and not even worry about “monitoring” it?

Works like this: each wheel gets its own engine/generator, a pretty standard layout for an EV drivetrain. It’s so much easier to do this with electric motors, because even very powerful versions are also relatively small. And since all of these motors are controlled by enough computing power to make Seymour Cray tear up, that means you can automatically build in (and tweak on the fly) things like differential anti-lock braking based on accelerator data and steering wheel angles to optimize traction through mid-corner out to corner exit. To name just one of the simpler sub-routines anyway.

It’s not just that the car, with tons of electrical power delivered to the pavement near-instantaneously, can go and turn and stop, it can potentially do two or even three of those simultaneously.

Let us just be Gorn-like, quick and merciful, and say this thing’s styling – regardless of how much aerodynamic sense it makes – looks like 13-and-a-half axe heads randomly attached to a big magnet. This car, the Terzo Millennio, does not look graceful or animated or lithe or agile. No, it looks stocky and apathetic and rigid and clumsy. Seriously. I’ve seen more aesthetic doorstops in Leningrad.

Chances are the Lamborghini Terzo Millennio will hit the streets right about the time the mid-engine, quad rotor Wankel-powered Corvette is arriving (i.e. right around the time Gloria Steinem marries Harvey Weinstein). It’s a neat idea though.

Tony Borroz has spent his entire life racing antique and sports cars. He means well, even if he has a bias toward lighter, agile cars rather than big engine muscle cars or family sedans.