Quattroporte Maserati liter gen horsepower
ZTSG 18/03/2022 Sedan 242
The original Maserati Quattroporte made its debut at the Turin Auto Show in 1963. With its gorgeous V8 engine and luxurious interior, it immediately became a symbol of wealth and prestige. At the time...

The original Maserati Quattroporte made its debut at the Turin Auto Show in 1963. With its gorgeous V8 engine and luxurious interior, it immediately became a symbol of wealth and prestige. At the time, the Tipo 107 Quattroporte was one of the elite cars with a speed of 143 mph, second only to Lagonda Rapide and the magnificent Facel Vega.

The first-gen Maserati Quattroporte was produced between 1963 and 1966. Unlike other vehicles at that time, the Quattroporte was built on top of a unibody steel platform. This made it lighter than the competition despite measuring over five meters (196.9 inches) long. It came with an independent front suspension and a De Dion tube rear suspension with a leaf-sprung rear axle.

Pietro Frua originally designed the Quattroporte for Prince Karim Aga Khan in 1962, drawing inspiration from the magnificent Maserati 5000 GT. But instead of having two fewer doors, the Quattroporte has four doors (Quattroporte means ‘four doors’ in Italian). And unlike the 5000 GT, the European model Quattroporte came with single rectangular headlights, but U.S. models came with twin round headlamps.

It also came with a fantastic 4.1-liter V8 engine capable of pumping out 260 horsepower to the rear wheels via a three-speed Borg-Warner automatic or five-speed ZF manual gearbox. All told, the Quattroporte could achieve a top speed of 143 mph. Maserati only made 230 units of the first-gen Quattroporte.

Maserati retained the U.S. model’s twin headlight design in the Series II Quattroporte. The new version also came with a leaf-sprung solid rear axle to replace the De Dion tube of the Tipo 107. This new model arrived in 1966, but the 1968 model came with a larger and more powerful 4.7-liter V8 producing 286 horsepower. This gave it enough muscle to achieve a top speed of 158 mph, effectively making it the fastest four-door sedan in the world back then.

Maserati made around 500 examples of Quattroporte Series II before ending production in 1969. 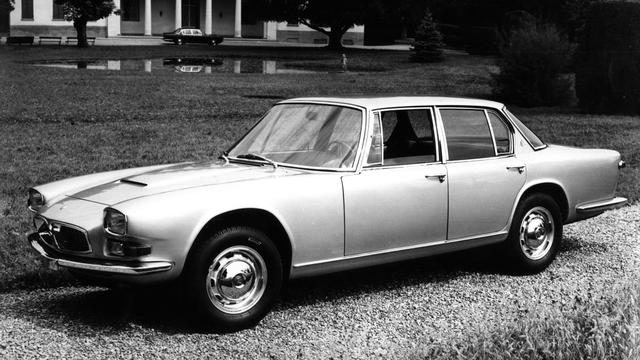 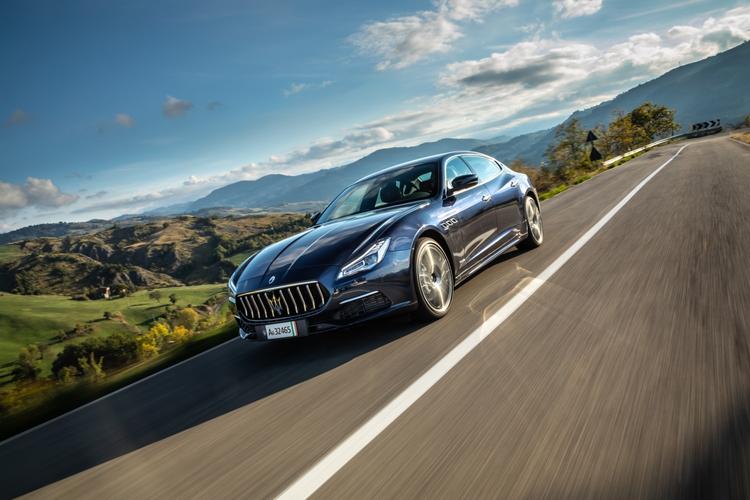 Perhaps the least popular Quattroporte among enthusiasts is the second-gen model. It debuted at the 1974 Paris Motor Show and the Turin Motor Show, but it didn’t come with a glorious V8 motor. French carmaker Citroën bought Maserati in 1968, but the second-gen Quattroporte came during a difficult time in the auto industry. And as such, Citroën downgraded everything good about the original first-gen Quattroporte in the name of cost-cutting.

It began with the chassis. The second-gen Quattroporte is built on an extended front-wheel-drive platform from the Citroën SM coupe. Marcello Gandini of Bertone designed the body, so it still came with some Italian flair. But instead of having a V8 engine, it came with a 3.0-liter V6 pumping out 207 horsepower. As expected, this didn’t resonate well with potential buyers as the smaller motor was barely enough for a top speed of 124 mph. Maserati built around 13 examples of the second-gen Quattroporte as production ended in 1978, and the development of a V8 engine was halted as both Citroën and Maserati declared bankruptcy in 1975.

Alejandro de Tomaso was responsible for saving Maserati from bankruptcy, and the first order of the day was to restore the Quattroporte to its former glory. Produced between 1979 to 1990, the third-gen Quattroporte was also the last breed of exclusive, hand-built Italian automobiles. It came with rear-wheel drive, a V8 engine, and a wedge-shaped body designed by no less than Giorgetto Giugiaro of Italdesign.

The third-gen Quattroporte was initially sold with two engine choices. Buyers could have either a standard 4.9-liter V8 with 276 horsepower or order a smaller 4.1-liter V8 motor with 252 horsepower. However, the smaller mill was discontinued in 1981.

de Tomaso commissioned a unique Quattroporte called the Royale in 1986 to celebrate Maserati 60th anniversary. It came with a higher compression 4.9-liter V8 and a revised fuel system, all of which were good enough for a higher 300 horsepower output. The Royale was befitting of the name with premium leather upholstery, a new dashboard with an analog clock, a custom mini bar, and four electrically-adjustable seats.

de Tomaso sold his stake in Maserati to Fiat in 1993, and the first car to be released under Maserati’s new owner was the fourth-generation Quattroporte. It debuted at the 1994 Turin Motor Show and was produced until 2001. From the onset, this Quattroporte is smaller than its predecessors being it was based on the compact-sized Maserati Biturbo. The wedge-shaped body style was penned by Gandini again and was considered one of the most aerodynamic cars in its era.

Initially available with a twin-turbocharged 2.0-liter V6 from the Maserati Ghibli, export models got a larger 2.8-liter turbo V6 generating 280 horsepower, enough for a top speed of 158 mph. The fourth-gen Quattroporte received a 3.2-liter AM578 twin-turbo V8 in 1995 that produced 330 horsepower and a top speed of 168. All engines were connected to a Getrag six-speed manual gearbox, while a four-speed automatic was available upon request.

Ferrari acquired a 50 percent controlling stake of Maserati in 1997 and debuted the Quattroporte Evoluzione at the 1998 Geneva Motor Show.

The fifth-gen Maserati Quattroporte made its debut at the 2003 Frankfurt Motor Show, followed by its U.S. debut at the 2003 Concours d’Elegance in Pebble Beach. Sitting on top of a new M139 platform, this Quattroporte was around 20 inches longer and had a 15.7-inch longer wheelbase than its predecessor. Maserati used the same platform for the GranTurismo and GranCabrio.

It initially came with a naturally aspirated, dry-sump 4.2-liter Ferrari V8 engine rated at 395 horsepower. The official numbers are mightily impressive as Maserati claimed a top speed of 171 mph and a zero to 60 mph time of 5.2 seconds. However, the Quattroporte S arrived in 2008 brandishing a larger, wet-sump 4.7-liter Ferrari V8 with 424 horsepower and 361 lb-ft. of torque. The Quattroporte Sport GT S debuted at the 2009 Detroit Auto Show sporting a 4.7-liter V8 engine with 434 horsepower.

Maserati built over 5,000 units of the fifth-gen Quattroporte in 2006 before production ended in 2012.

The current sixth-generation Maserati Quattroporte made its debut at the 2013 Detroit Auto Show. The Quattroporte GTS, in either rear-wheel drive or all-wheel drive, initially came with a twin-turbo V6 engine or a twin-turbo 3.8-liter V8 (both sourced from Ferrari). The sixth-gen model has a steel and aluminum unibody chassis with a 124.8-inch wheelbase, making it the largest Quattroporte among its predecessors.

The new model for 2021 is the Maserati Quattroporte Trofeo. It is equipped with a retuned 3.8-liter twin-turbocharged V8, which can produce 580 horsepower and 538 pound-feet. The torque. Maserati claims that the Quattroporte Trofeo is the fastest ever, with a time of 4.5 seconds from 0 to 60 mph.