However, the Tesla Model S lords over many in the EV universe.

Is this sleek Audi strong enough to dethrone the mighty Tesla Model S?

It’s no secret the Audi e-tron GT was a hit during the 2018 Los Angeles Auto Show. And why not? Based on the exterior proportions, it is basically a stretched version of the Audi R8, which is not a bad car to begin with.

But it doesn’t matter if Audi is directly targeting the Tesla Model S when it conceived the e-tron GT Concept (which they did). The newest electric vehicle from Audi will have to win over potential Tesla Model S buyers to be considered a success, hence the significance of this virtual EV showdown!

The current Tesla Model S is no stranger in the automotive world. It paved the way for the eventual construction of the Model X and Model 3. The Tesla Model S has the looks of a luxury car, the stance of a sports sedan, and the performance of a supercar; not to mention the practicality and carrying-capacity of a crossover.

It’s hard to put into words, but the Tesla Model S is the daddy. It’s the prime beef! If other premium electric vehicles want to succeed, they must top the Model S in all aspects, including driving range and cost of ownership.

I’m also a purveyor of the Musk philosophy. Many people find many things wrong with Elon Musk and his creations, but the products are speaking on behalf of the brilliance that is Elon. He specifically created a family luxury car that ordinary daddies can play with when the wife is out shopping, or when the kids are in school.

Even in base spec 75D, the Tesla Model S is no slouch. The dual-motor, all-wheel drive system can propel the hefty Model S (approximately 4,719 lbs.) from zero to hero in 4.2 seconds. That’s faster than most sports cars. The range is around 259 miles on a single charge.

Prices for the base trim start around $75,000. I know that’s enough money for a proper luxury car, but you do get a nice amount of kit. For example, 19-inch wheels, adaptive air suspension, LED headlights, a 17-inch touchscreen, and Wi-Fi connectivity. Enhanced autopilot with full self-driving capability is optional.

But in this trim, you only get vinyl and cloth seats. If you want leather, you need to select the premium upgrade, which is optional to other trim models of the Tesla Model S.

But there’s a catch!

For a family sedan, the Tesla Model S P100D starts around $94,000 without options. If you’re the typical family man, it’s a lot of money to spend on a car. You can get a premium SUV for that price with more room and possibly some off-road capabilities. However, for that price, you will never have to visit a gas pump again, not to mention blowing the doors off most sports cars. I don’t know about you, but that sort of freedom is, in a nutshell, priceless.

But the Tesla Model S is not only properly quick. It can seat five adults. If you choose the optional rear-facing jump seats, it increases the capacity to seven, although the seats are only good for midgets, small children or both. It also has 30 cubic feet of cargo space, large enough to swallow a day’s worth of Black Friday shopping.

However, the Tesla Model S is not bulletproof. This is expected given Elon’s struggles to gain a firm and profitable hold on the company. Most recently, Tesla issued a recall on the electric power steering system in the Model S. In 2015, they recalled every Model S to fix a seatbelt issue. Then again, those had nothing to do with major EV components like the battery and electric motors. You can call it growing pains if you want, but these niggles are somewhat insignificant given the capabilities and performance of the Model S. 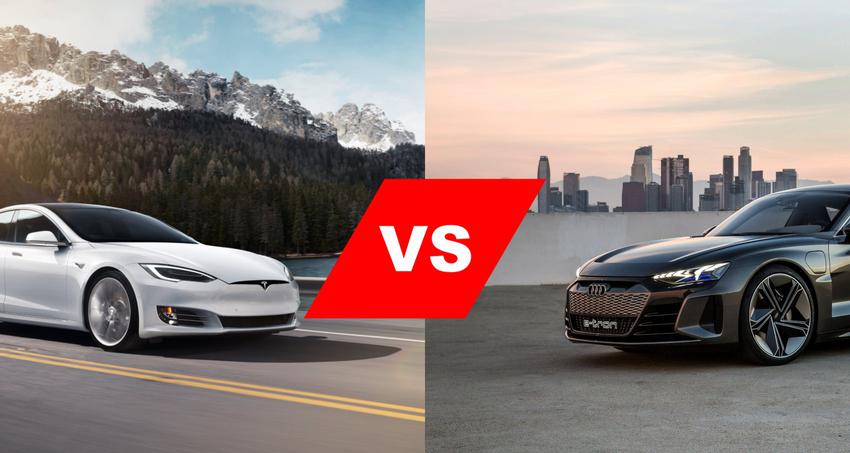 The Model S comes with a mobile charging cord with three adapters: NEMA 5-15 (three miles per an hour of charging), NEMA 14-50 (240-volt outlet, 10 hours for full charge), and an adapter for Tesla Superchargers (full charge in 1.5 hours). If you have a Tesla wall connector, it can juice up the batteries in six to nine hours.

If you think the Audi e-tron GT is merely a concept car, think again. Audi says it’s 99 percent ready for production and will be available by 2020. I’m not sure why it’s taking that long, but it probably has something to do with Audi’s intent in trying to come up with a different sort of four-door EV.

To start, Audi grabbed a clay model of the Audi R8, lifted it a bit, widened the corners, and stretched it aggressively to produce a low-slung, prowling stance. Whereas the Tesla Model S is gifted with an organic yet plebeian shape, the new Audi e-tron GT is an exaggerated version of the R8 sports car – but in a good way, mind you.

The Audi e-tron GT has the same fastback styling, which is all the rage nowadays. It gives the e-tron GT a sleek and aerodynamic shape. This car sits low and wide to the ground, like an R8. But you get a wider cabin with loads of space for four adults. You also get additional headroom in the front and rear seats. The latter is an impressive feat given the sloping roofline in the rear.

This is a testament to how low the Audi e-tron GT is to the ground.

From the front, it’s definitely like a wider R8. From the sides and rear, however, it gets more familiar. The Audi e-tron GT concept shares almost the same dimensions as the current Porsche Panamera. Ironically, the e-tron GT also shares the underpinnings and electric powertrain of the Porsche Taycan EV, which also happens to be an electric, four-door and coupe-like sedan.

I’ll say it again: the Audi e-tron GT, as the name suggests, is a gran turismo sports sedan. Don’t let anybody tell you otherwise. If Audi was aiming to run over the Tesla Model S, it would have given the e-tron GT ludicrous-worthy numbers.

Instead, Audi fitted the e-tron GT with a pair of electric motors and a flat battery pack. The latter essentially forms the flat floor in the e-tron GT. It also comes with an electronically-driven Quattro all-wheel drive system, the same sort you will find in the e-tron SUV. It governs all four wheels using digital torque vectoring without needing mechanical linkages between each wheel.

The Audi e-tron GT also comes with a 90 kWh battery pack, enough for 248 miles of range. The electric motors churn out 590 horsepower for a zero to 60 mph time of 3.5 seconds. Not exactly mind-blowing numbers if you ask me, but it’s enough to shame the Tesla Model S 75D. However, it’s not enough to run circles around the 100D and P100D.

From those numbers alone, the Audi e-tron GT is not pretending to be a supercar or hypercar, and that’s good. Without a doubt, it’s easy to have fun in a 590 horsepower electric car, and the Audi e-tron GT will certainly oblige. It has the looks, stance, engineering, and the badge to back it up.

Related: The 2019 Audi e-tron will change how you feel about EVs.

But what makes the Audi e-tron GT stand out from the Tesla Model S is the interior. It doesn’t have the minimalist approach of the Model S, but I’m glad they didn’t take that route. Much in the same way I felt about the Audi e-tron SUV, I like the fact that Audi gave the e-tron GT a normal-looking interior.

And I say this with high praises. Audi is a luxury brand, no doubt. And even if the e-tron GT is equipped with a vegan-themed interior (synthetic leather and recycled fish nets for carpets, no kidding!), it managed to remain premium and luxurious to the naked eye.

The Audi e-tron GT can only seat four people, which makes it less practical than the Tesla Model S. But since the e-tron GT is not primarily a people-hauler, that’s not a tough pill to swallow. Audi is marketing the e-tron GT concept as a performance derivative of a family car, so having four seats instead of five is not exactly a bad thing.

Where Tesla is marketing the Model S to be the only car you ever need, the Audi e-tron GT Concept is for people who already have more practical family vehicles. Instead, they want to add a faster (yet still somewhat practical and luxurious) EV with an Audi badge.

Even though you get more cargo room in the Tesla Model S, the Audi e-tron still offers 15.9 cubic feet of cargo space in the rear, and another 3.5 cubic feet under the front bonnet.

Oh and before I forget, am I the only one who thinks Tesla interiors are dreary? Please don’t get me wrong. The minimalist and ergonomic theme is a welcome change, but the build quality and materials could use an upgrade considering the rather hefty price tag.

The Audi e-tron GT recharges itself in a variety of ways. Lifting your foot off the throttle will trickle-charge the batteries, for example. The same thing happens when stepping on the brakes. This allows the 90 kWh battery pack to achieve the claimed 248 mile range, even if you’re pushing it and wasting energy.

But the Audi e-tron GT has another ace up its sleeve: the 800-volt charging system. This standard system juices the battery pack to 80 percent in just 20 minutes. Other charging options include the Audi Wireless Charging System, perfect for potential owners who are too lazy to plug-in their e-tron GT upon arrival.

The Audi e-tron GT is an attractive proposition. No word yet on pricing, though. But if the base trim is around $75,000 to $80,000 then Audi has a sure winner here. I’m pretty sure the top model will cost upwards of $100,000 but we’ll have to see how Audi positions the e-tron GT in the consumer market.

As for the Tesla Model S, it remains the daddy for now. But if you want a luxurious and reasonably-quick sedan that gurgles electrons instead of fossil fuel, you’ll have to wait for now to experience what the Audi e-tron GT has to offer.

But if Audi announces an RS version of the e-tron GT, then all bets are off.