ZTSG 12/07/2021 Suv 495
The 2020 Hyundai Palisade checks all the boxes in terms of what a large SUV should be. That much was clear during our week-long drive with a 2020 Palisade Limited press vehicle. It most certinately lo...

The 2020 Hyundai Palisade checks all the boxes in terms of what a large SUV should be. That much was clear during our week-long drive with a 2020 Palisade Limited press vehicle. It most certinately looked the part, and we enjoyed the quiet and futuristic cabin. However, the Palisade has a few quirks that could reduce a driver’s confidence, especially at night.

2020 is the first full year of the Hyundai Palisade, arriving as a replacement for the three-row Santa Fe XL. The Palisade rides on an entirely new architecture and offers a number of family-friendly features like wireless charging, second-row ventilated seats, and seven USB ports.

Even though it’s only the first year, we have every reason to believe the Palisade will be as reliable as other Hyundai models. As a whole, reliability is a strong point for Hyundai.

In a “Battle of the Brands” comparison, U.S. News & World Report ranked Hyundai ahead of Honda on reliability. “Hyundai vehicles are more reliable than Honda’s, with every vehicle from the Korean automaker earning at least a 3.5 out of five predicted reliability rating from U.S. News,” the publication writes.

In the J.D. Power 2019 U.S. Initial Quality Study, Hyundai scored high on the reliability index. “Remarkably, 16 of 18 models from Hyundai Motor Co. rank among the top three in their respective vehicle segments. These Korean-brand vehicles tend to have fewer problems with infotainment systems and other electronic components,” concludes J.D. Power.

Our 2020 Hyundai Palisade Limited press vehicle came standard with everything but the kitchen sink. The only optional item were the carpeted floor mats!

Our Palisade Limited also had 20-inch wheels, a sunroof with a sliding shade, heads-up display, and LED headlights, taillights, and daytime running lights.

Base price for our Palisade Limited was $46,400. The final MSRP ($47,605) wasn’t far off, given the generous amount of standard features. The carpeted floor mats ran an additional $160 while freight and handling charges totaled $1,045.

We think the Palisade is competitively priced, but depending on local incentives in your area, you might be able to save a little more. This free and easy search tool* will show you which dealers near you are offering the best price.

Gone is the traditional shifter, replaced by a push-button system that opens up a lot of real estate. It may take some getting used to, but there is more storage space in the center console without a conventional shifter. With the push-button design, the middle console and dash feel more accessible and usable, and you won’t bump your hand on the shifter as you are reaching for your coffee. Slide open the center console lid to find retractable cupholders, which are a nice touch.

We really liked the Qi wireless charging pad and used it each day we drove. The pad, inside the center console, is compatible with Android devices and newer iPhones. Likewise, the Palisade’s navigation system supports Android Auto and Apple CarPlay. Two Bluetooth devices can be paired simultaneously, with one for a mobile connection and the other for audio streaming.

The Harmon Kardon stereo delivers a warm mix of bass and treble. For the majority of our week-long drive, I tuned to Classic Vinyl (SiriusXM 26) so I could catch Earle Bailey’s show. Crosby, Stills, Nash & Young, Emerson Lake & Palmer, The Doors, Queen, and Led Zeppelin all sound good pumping through the Palisade’s cabin.

The Palisade’s stereo includes a Rear Sleep Mode, which allows only the front row to hear the audio. In this mode, nothing is transmitted to the second- and third-row speakers. It’s good to use if passengers are sleeping, or if they think your music is uncool. 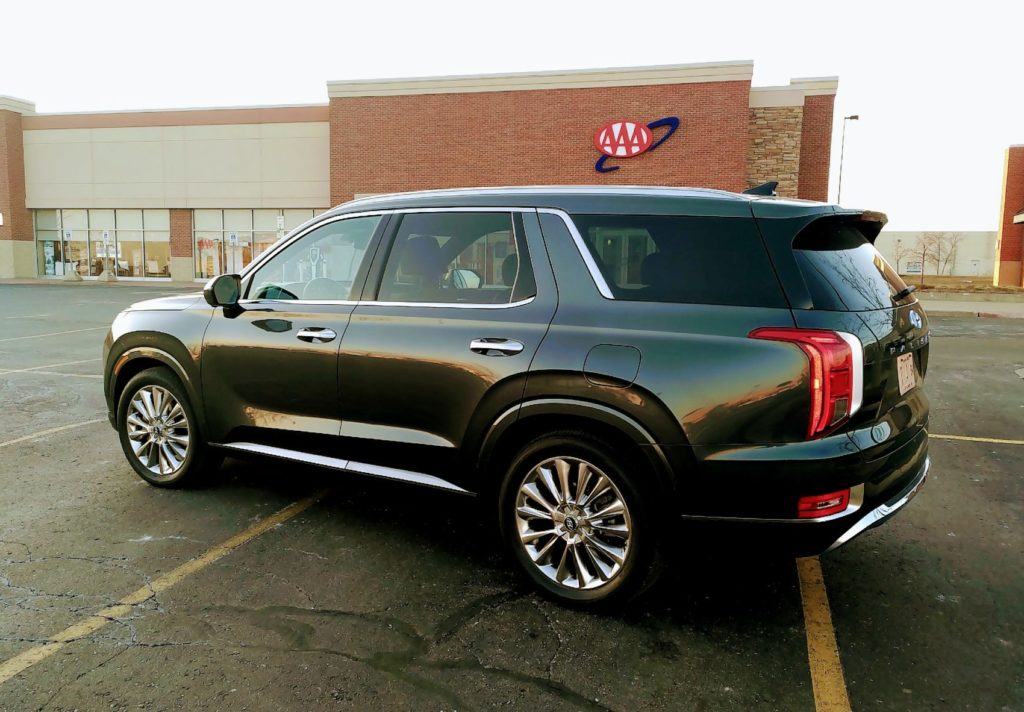 The three-row Palisade seats eight with the second-row bench, or seven if you opt for captain’s chairs. Hyundai says the Palisade has more first and second row legroom than the Honda Pilot, Nissan Pathfinder, and Ford Explorer; and more cargo room behind the third row than the Highlander, Pilot, and Pathfinder.

Our press vehicle came with a power folding/unfolding and reclining third-row seat, along with a reconfigurable rear cargo area. Cargo room behind the second row is 45.8 cubic feet; 18 cubic feet behind the third row.

Under the hood of the Palisade is a 3.8-liter Atkinson-cycle V6, regardless of trim level. Complete with direct injection and variable valve timing, the Hyundai plant cranks out 291 horsepower (6,000 rpm) and 262 lb-ft. of torque (5,000 rpm). The Palisade’s engine is married to eight-speed automatic with a multi-plate torque converter and a final drive ratio of 3.648.

Our 2020 Hyundai Palisade came with five different drive modes: Comfort, Eco, Sport, Snow, and Smart. The video below explains how each mode works.

Since we live in Michigan, we understand the peace of mind all-wheel drive can bring during the winter months. We believe it’s worth the extra cost.

Compared to other all-wheel drive SUVs, the Palisade lags behind in fuel economy. The Mazda CX-9, Honda Pilot, and Toyota Highlander return better numbers. We noticed this too during our week-long drive. Even in Smart and Eco modes, the fuel gauge seemed to drop quickly.

The Saturday evening we had our Palisade, Danielle and I cruised over to the Canton and Plymouth areas near Detroit. The trip down I-94 was pleasant as we sipped our coffee and chatted away. The 2020 Palisade has under-hood insulation, sound-deadening carpets, and special powertrain tuning to keep noises and vibrations to a minimum. As a result, things are remarkably quiet on the open road.

Crosswinds can be difficult for the Palisade, and even more so when the road is bumpy or uneven. The larger Palisade, in certain situations, can feel unstable despite being quiet and smooth most of the time. If a sudden wind comes up, the reactive motion of the Palisade may take a driver by surprise. In these situations, the lane-keeping assist feature will actually make things worse. The driver may feel as if they are fighting the Palisade, so it’s our recommendation to turn the system off during windy days.

The blind-spot detection system may also register false positives. For example, we when drove under a bridge, the sensors picked up the concrete pillars and read them as another car. Twice we exited onto M-10 here in Detroit and received notifications despite no cars in the other lane. We believe the Palisade was picking up signage near the road and confusing it for traffic.

Our press vehicle was equipped with LED headlights, but there is something in the design of those lights that makes this strange, upside down triangle in the distance.

Take a look at the photos below. Notice the inverted mountain or shark fin in the photo on the left. In the photo on the right, it has been enhanced. These are not the greatest pictures as I took them with my phone at night, but this triangle is really bothersome.

On a brightly lit road, you won’t notice it, which is why we didn’t see it initially. This inverted shark fin also moves up and down as the Palisade encounters bumps, splitting into two separate shadows at times. It’s annoying at best, distracting at worst. We eventually got used to it, but for those who are nervous driving at night, this quirk about the Palisade could be a deal breaker.

We recommend putting the Palisade on your list. Hyundai builds reliable vehicles, and we did enjoy the quiet and luxurious interior of our Limited press vehicle. That said, we also recommend shopping around, given the nighttime issue with the lights and lower fuel economy versus the competition.

It’s also worth noting this is the first year for the Hyundai Palisade. Hyundai has shown, especially with the 2020 Sonata, how they are capable of improving on their designs. We hope the Palisade stays around for a long time, and will be excited to see the second generation of the larger SUV down the road.