2020 Mercedes-Benz GLS: Inside The S-Class of SUVs

ZTSG 08/07/2021 Suv 436
SUVs are, or at least started out, as barely civilized work trucks designed to haul people and their stuff from point A to B no matter the road conditions. Over time, people wanted a less truck-like d...

SUVs are, or at least started out, as barely civilized work trucks designed to haul people and their stuff from point A to B no matter the road conditions. Over time, people wanted a less truck-like demeanor and more car-like comfort. Which leads us directly to this, the 2020 Mercedes-Benz GLS.

The title just about says it all, doesn’t it? The 2020 Mercedes-Benz GLS is big, safe, and loaded with everything a driver or passenger could want. Sounds like an S-Class, no? It’s like an S-Class, only shaped like a big friggin’ box with all the subtly and styling of a half-track.

For me, that’s a good thing. I like my SUVs devoid of pretense.

Mercedes-Benz goes in a different direction with the GLS, stating right up front how it’s the “largest and most luxurious SUV” in their lineup. Further, the Germans say the new GLS is about offering more: more space, more comfort, and more luxury. For 2020, the GLS is 2.4-inches (60 mm) longer, wheelbase-wise, so the interior is more spacious, especially for second-row passengers. For example, legroom here is increased by 3.4 inches when the seats are in their rearmost position, which also makes it easier to jump in.

There are three, fully-electric and adjustable seat rows so all passengers get a generous amount of space and comfort. The third-row seats can lower into the floor to increase the trunk space, while the second-row seats fold flat. In other words, you’ve got tons of space for stuff if you need it, and when you don’t need it, you’ve got lots of space for people.

Speaking of space for people, there is a six-seater variant of the GLS that has two luxurious captain’s chairs for the second row, a first for 2020.

There’s an Executive Rear Seat Package with a separate seven-inch Android tablet for controlling the comfort and entertainment functions from the rear. It is even possible to order a lumbar massage function for the rear seats. HVAC? Shut up and get out! Five-zone automatic climate control for the rear seats, each set by the tablet. Also standard is the Easy-Entry function for getting into and out of the third-row seats (meaning all of the rear seats simply move forward and/or fold down via a button).

But that’s just the start of everything the 2020 Mercedes-Benz GLS packs. 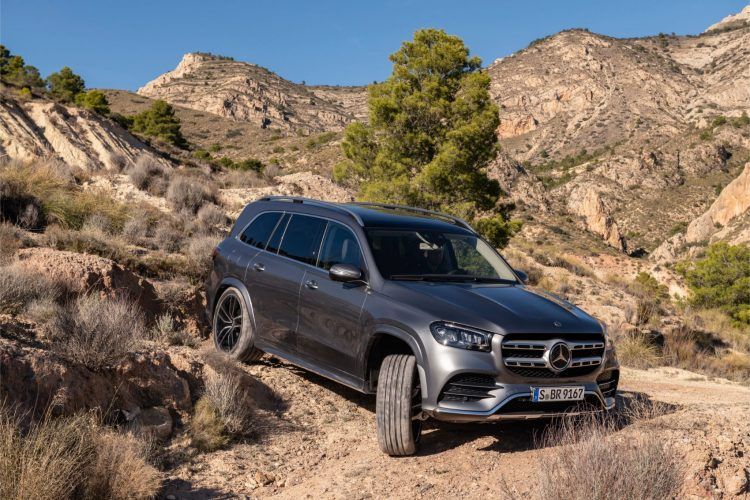 Also hitting the road for the first time in 2020 is the GLS 580 4MATIC. This big-block V8 variant has Mercedes’ EQ Boost system, a 48-volt on-board electrical setup with an integrated starter generator. Running the higher 48-volt setup allows for, in this instance, what would be a normal starter as a generator; and as a continually-available power source. This EQ Boost system sort of halves the way between hybrids and gas engines. It’s pretty clever.

All variants of the new GLS feature a nine-speed automatic. The electronically-controlled, multi-plate clutch transfer case allows for a “variable transfer of drive torque” from zero to 100 percent (torque on demand) between the axles.

The new GLS also features Mercedes’ sophisticated E-Active Body Control, an active suspension system paired with the aforementioned 48-volt technology. The result is a more comfortable ride and agile handling, and a higher degree of off-road capability. For example, the off-road functions on the 2020 Mercedes-Benz GLS include a “rocking mode.” Say your new GLS has become bogged down in the sand because you were out catching the waves. Well, the suspension level will automatically raise and lower several times, changing the ground pressure of the tires to improve traction. This, according to Mercedes-Benz, helps the GLS “rock itself free.”

Furthermore, Mercedes says the GLS has impressive aerodynamics with a Cd of 0.32. They’re right, that is impressive, for something that’s shaped like the crate it’s shipped in. With regard to aerodynamics, special attention was paid to the underbody and the air flowing through the engine compartment because of the vehicle’s shape. With the GLS, engineers had to address the more upright front end and higher ground clearance when it came to air flow. Ultimately, the new GLS was subjected numerous computation loops, CAE simulations, and wind tunnel measurements in Sindelfingen, Germany.

Oh, and get this: there’s a new Carwash function. Push a button and “woosh,” the mirrors retract, the side windows and sunroof close; the climate control goes to air-recirculation mode, and the 360 camera shows what’s directly ahead so you have an easier time getting into the wash. All that stuff you would normally do with several steps is now done with a single button. Ain’t life grand?

The 2020 Mercedes-Benz GLS will go on sale in the U.S. by the end of the year, with production taking place in Tuscaloosa, Alabama. Look, I’m not usually one to advocate for this sort of thing but if (and this is a big if); you’re rich and have a large family, it sure sounds like the new GLS is the ride for you.