The Audi e-tron GT debuted in concept form at the 2018 Los Angeles Auto Show, and debuted on the big screen with Tony Stark in "Avengers: Endgame." Four years have passed, and the 2022 Audi e-tron GT is ready for prime time.

It’s no secret the Audi e-tron GT and Porsche Taycan are platform twins, but the two high-performance EVs have different characters and temperaments. The Taycan is an all-conquering Porsche bearing the iconic 911’s ‘Turbo’ badge, spearheading Stuttgart into the next-generation, hence the meatier performance numbers versus the Audi e-tron GT.

On the other hand, the e-tron GT is a high-performance grand tourer, and it’s a stunning one at that. It looks better than the Porsche – even though both unmistakably share a few styling cues, particularly in the rear roofline and rear flanks – but it has the aura of Audi’s unforgettable Rosemeyer concept from the year 2000.

Even though the Porshe has more power and is faster in the real world, don’t expect the Audi to wither in the Taycan’s presence. It has the same 800-volt electrical architecture powering two electric motors to deliver scintillating performance, and an RS model is waiting in the wings, promising more speed at a lower price point than the Porsche.

Powering the 2022 Audi e-tron GT are two permanently synchronous motors (PSM). The front motor is smaller and produces 235 horsepower. The bigger rear motor churns out 316 horsepower for a combined output of 470 horsepower and 455 lb-ft. of torque. Audi claims zero to 60 mph in 3.9 seconds and a top speed of 152 mph. It’s not Tesla-quick (or Taycan-quick), but the e-tron GT can seriously threaten an R8 V10 on a dragstrip. 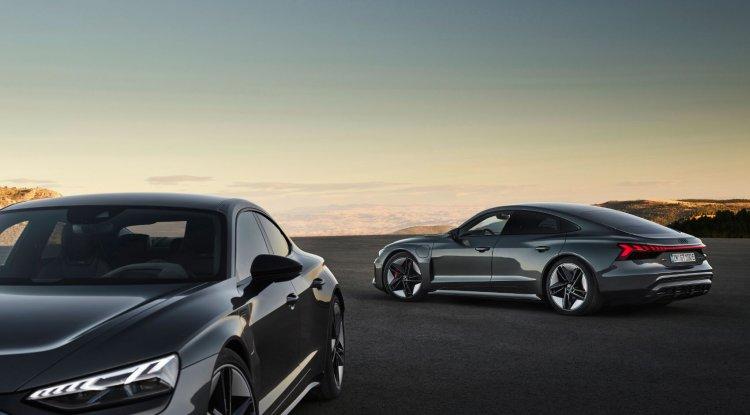 Additionally, Audi put in an over-boost function where the two motors pump out a max of 522 horsepower for 2.5 seconds in launch mode.

A 93.4 kWh lithium-ion battery pack feeds the motors for an estimated 248 to 280 miles of range (official EPA numbers are forthcoming). The e-tron GT’s 800-volt architecture allows maximum DC charging rates up to 270 kW, enough power to recharge the batteries from zero to 80 percent in under 25 minutes.

It’s hard to talk about the RS badge without mentioning the RS6 Avant and RS7 Sportback, two of the most desirable Audis of the modern era. Both have blown V8 motors pumping no less than 591 horsepower, forging the fine line between a practical family vehicle and a high-performance sports car. The RS e-tron GT has no V8 engine, but it has the right numbers to become the newest torchbearer of Audi Sport.

The 2022 Audi RS e-tron GT has the same front electric motor as the standard model. However, it has a mightier rear electric motor pumping out 450 horsepower, raising the combined output to 589 horsepower and 612 lb-ft. of torque. It also has an over-boost function to summon 637 horsepower for 2.5-seconds in launch control. With that much power, the RS e-tron GT goes from zero to 60 mph in 3.1 seconds and has a top speed of 152 mph.

The sportier e-tron has a stiffer chassis and bespoke steering and suspension tuning befitting of an RS model. It also receives all-wheel steering as standard for sharper handling and better maneuverability. The system tilts the rear wheels (up to 2.8 degrees) in the opposite direction at lower speeds. It can also turn the rear wheels in the same direction as the front wheels above 30 mph to enhance high-speed stability.

The Audi e-tron GT has a standard three-chamber air suspension with 60 percent greater capacity versus the e-tron SUV and e-tron Sportback. More than stretching the tolerances between comfort and handling, the air suspension allows you to raise or lower the vehicle to improve aerodynamic performance. The e-tron GT’s 0.24 Cd drag coefficient is best in class, made possible by its slippery shape and electronically-actuated radiator air inlets and brake ducts.

Also standard is a two-speed transmission and Quattro electric drivetrain. The vehicle starts in second gear in normal driving to improve range and efficiency. Standard for the RS e-tron GT is a rear-axle differential lock with a multi-plate clutch to improve traction and handling over slippery road surfaces.

Inside, the e-tron GT has everything you’d expect from a modern Audi. It has a ‘monoposto’ cockpit that angles the 12.3-inch virtual cockpit and 10.1-inch infotainment screen toward the driver. The leather-free interior consists of recycled materials, while the flat-bottom Alcantara steering wheel has a capacitive hands-on detection system.