2022 Chevrolet Bolt EUV and Bolt EV will be available this summer. Chevrolet recently unveiled the two cars. Despite some key differences, they share a new platform and multiple connectivity and security technologies.

The Bolt EUV and Bolt EV are part of General Motors’ overall plan to launch 30 new EVs globally by 2025 and reimagine the future of mobility. Here in the Motor City, GM is remodeling the Detroit-Hamtramck assembly plant as part of the initiative. “We want to put everyone in an EV, and the new Bolt EUV and redesigned Bolt EV are crucial to doing so,” said GM President Mark Reuss. “Together, they enable mainstream customers to be part of our vision of zero crashes, zero emissions, and zero congestion.”

While GM looks to the future, we will focus on the more near-term with this article. Here is an in-depth look at both EVs and what to expect when they arrive this summer.

The 2022 Chevy Bolt EUV is more SUV-like than the standard Bolt EV. While they share the same architecture and platform, the Bolt EUV is about six inches longer and will provide rear passengers with extra legroom. According to Chevy, the Bolt EUV has more features overall than the Bolt EV.

The Bolt EUV has different exterior styling elements, including a unique front-end, standard LED headlamps, and daytime running lamps that double as sequential turn-signal indicators. Additional Chevy SUV styling cues on the EUV include a “center crease line” that runs from the front fascia through the hood. Chevy says this center crease line was done to give the vehicle a sense of motion even when at a standstill. Roof rails are also standard on the Bolt EUV.

By contrast, the Chevy Bolt EV has a more upright front fascia with unique front and rear lighting signatures. However, like the Bolt EUV, the Bolt EV also has daytime running lights.

However, there are quite a few similarities between the Bolt EUV and Bolt EV. For example, both feature new instrument panels, premium seat designs, and a 10.2-inch-diagonal touchscreen that integrates real-time displays and other commonly used features. Drivers have more info available via the eight-inch gauge cluster. An electronic gearshift frees up space while the sporty flat-bottom steering wheel incorporates the Regen on Demand paddle.

The chart below shows the differences between the interior dimensions of the 2022 Chevy Bolt EUV and the Bolt EV. Here are a few quick points of comparison:

Headroom is nearly the same between both vehicles, although the Bolt EUV with a sunroof offers the least amount of headroom. 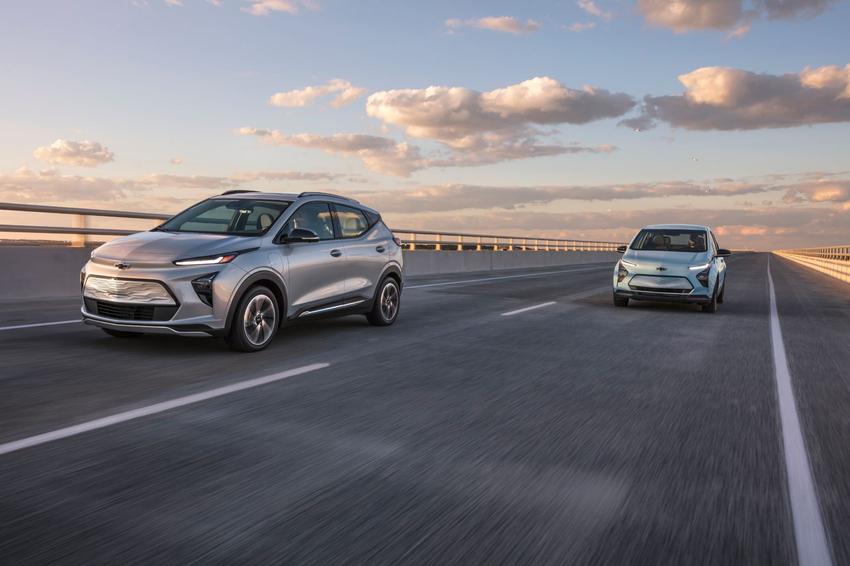 Both employ a unique thermal management system that uses coolant to keep the battery operating at its ideal temperature to ensure performance and efficiency. The battery is covered by a factory warranty of eight years or 100,000 miles.

The Bolt EV provides a GM-estimated 259 miles of range when fully charged; the Bolt EUV is slightly less at 250 miles.

Although GM-estimated and not EPA-confirmed at this point, those figures will likely bode well for the new Bolt EUV and Bolt EV. By contrast, the 2021 Nissan LEAF, one of the most popular EVs on the market and a solid competitor of the Bolt, has a max driving range of 226 miles (S Plus trim level).

The One Pedal Driving feature lets the driver speed up, slow down, and even come to a stop using only the accelerator.

According to Chevy, 30 minutes of DC fast charging will add up to 100 miles of range for the Bolt EV and 95 miles for the Bolt EUV. By contrast, it will take about seven hours for a full charge via a 240-volt outlet.

As part of a collaboration with Qmerit, Chevy will cover the home installation of a Level 2 charger for eligible customers who purchase or lease a 2022 Bolt EUV or Bolt EV. As for charging away from home, GM and EVgo are collaborating to triple the number of fast chargers and expect to add 2,700 chargers around the country by the end of 2025. In the meantime, drivers will have access to more than 80,000 chargers in North America via the myChevrolet app.

With an attentive driver and under the proper conditions, Super Cruise permits hands-free operation of the vehicle. It can be used on more than 200,000 miles of enabled roads in the U.S. and Canada. This in-depth guide explains how the technology works.

Initially a Cadillac feature, Super Cruise is starting to move around the GM family. The system will now be available for the 2022 GMC Sierra and the 2022 Chevy Bolt EUV.

When they arrive this summer, the 2022 Chevy Bolt EUV will start at $33,995, while the Bolt EV will begin at $31,995. Both figures include the destination charges but exclude other credits and incentives that buyers may be eligible for. Given it’s the first year for the Bolt EUV, a special launch edition will also be available.