Acura MDX Prototype 2021 amp
ZTSG 21/03/2022 Suv 172
When Acura promises that the new fourth-generation MDX will become the highest-quality, performance-focused SUV in its product line, you will sit down and pay attention. Acura MDX Prototype gives us a...

When Acura promises that the new fourth-generation MDX will become the highest-quality, performance-focused SUV in its product line, you will sit down and pay attention. Acura MDX Prototype gives us a sneak peek, what can we expect when the fourth-generation MDX comes out early next year. Based on MDX Prototype, the mass production version of 2021 MDX will provide a more refined in-car experience. The body of Acura's flagship SUV is also marked by a wider grille, which aims to convey a more muscular design.

According to Acura, those riding in or driving the new MDX should experience more athletic handling, refined ride comfort, and exceptional cabin quietness. All these updates amount to an SUV brainchild built to carry the title of the Acura’s new flagship model.

The Acura MDX family throughout the years. The 2001 MDX (far left) debuted in 2000 and was honored as the North American Truck of the Year at the time. Photo: Acura.

When painted in a matte liquid carbon, the Acura MDX Prototype gives me a futuristic Tron: Legacy vibe with that long hood, angular four-element JewelEye LED headlights, and three-dimensional Diamond Pentagon grille. Adding that hood gave a six-inch increase in the dash to axle dimension. The front fascia was sculpted to emphasize the wider grille and integrate the fog lights underneath the side vents. Acura pushed the 21-inch wheels further apart and added a sharp, sculpted beltline to give the MDX’s side view an elongated look.

Not so hard to imagine jumping in this SUV for a space-age race against the Light Cycle.

The MDX Prototype’s overall wider look flows through the interior, evidenced by the upright instrument panel and more legroom for drivers and passengers. For the driver and front passenger, sport seats offer 16-way power adjustment and integrated massage with nine different modes to choose from. A massage feature is probably the only thing that could lure me to stay in any vehicle after a nine-hour road trip (one massage mode for each hour). 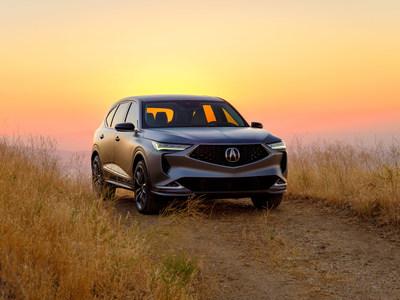 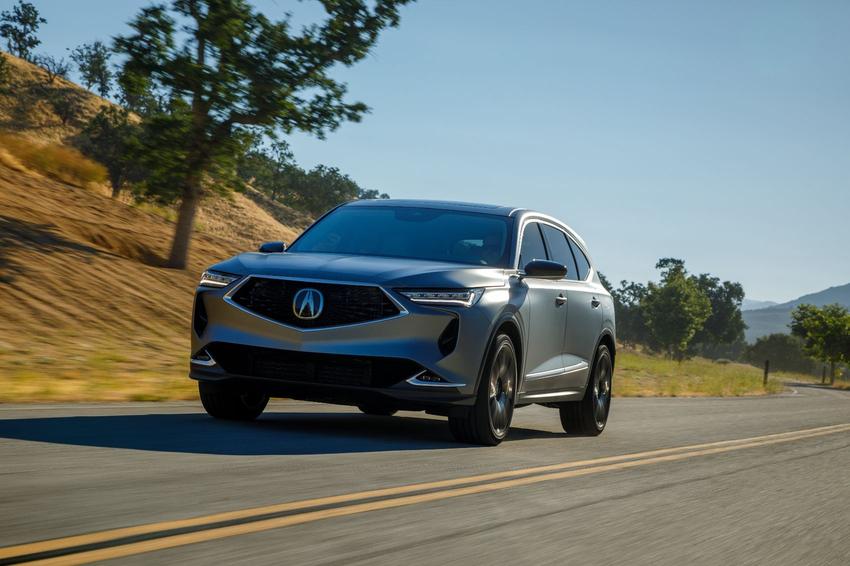 In terms of interior design, it seems Acura is trying to balance polished newness with soft comfort. Acura combines open-pore wood with metallic flakes and contrasts that with polished aluminum and soft-touch Milano leather. The leather covers the seats with “curvilinear quilting.” This design is carried throughout all three rows and complemented with high-contrast stitching and piping.

Following through to the instrument panel and steering wheel, French stitching details the leather, which features shades of Ebony and Light Orchid, although, to my eyes, it reads as a nice beige.

With 1,000 watts of power and 25 speakers, the “Signature Edition” ELS STUDIO 3D audio system aims to deliver a studio experience. The six-carbon fiber coned mid-range subwoofers, along with six speakers mounted to the ceiling, are supposed to deliver “perfect left to right balance.” With all those features, it seems the system deserves its premium title.

Other technology updates in the MDX Prototype include the expansion of different advanced safety features in the AcuraWatch package. Features like Road Departure Mitigation, Traffic Jam Assist, and Low-Speed Braking Control are all included along with an update in the airbag technology to improve occupant protection.

The MDX greets two new powertrains in 2021. The standard powertrain is a 3.5-liter i-VTEC six-cylinder engine paired with a 10-speed automatic. In contrast, the MDX Type S features a 3.0-liter turbo V6, which creates 355 horsepower and 254 lb-ft. of torque. Those specs make this the most powerful engine an Acura SUV has held beneath the hood.

Suspension and powertrain, handling, and steering can be customized by the Intelligent Dynamics System (IDS). Pre-set modes are available, but the driver can customize their own individual settings using the Drive Mode dial inspired by the NSX supercar.

The Acura MDX will arrive at dealers early next year, with the Type S to follow in the summer of 2021. Pricing and EPA fuel economy ratings have not yet been announced for the 2021 MDX. As for the Acura MDX Prototype, don’t expect it to be anything more than just that: a prototype. However, the production version of the 2021 MDX should be pretty close to the prototype, all things considered.

Source of photos and works: Acura.