Author Pete Lyons (Pete Lyons) records the story of the most legendary car in Formula One.

Lyons documents the incredible six seasons the Lotus 72 was in action (1970-75).

Where To Get it:

Obsessive To The Core

Looking closely is just what Pete Lyons does with Lotus 72. At first glance, it does not seem like a great leap forward (to quote Chairman Mao) but it actually is. The Lotus 72 set the design and engineering trends race teams are still following to this day: things like side-mounted radiators, integrated aerodynamics, and lighter unsprung mass.

It is with this car Chapman moved the benchmarks (again), and it is with this car some of the greatest racers of the era made their mark, most particularly Jochen Rindt and Emerson Fittipaldi. Indeed, Fittipaldi writes the forward for Mr. Lyons, flatly stating “The Lotus 72 was the best car I ever drove in my racing career.” Think about that for a second. Think about what other cars he raced and won with – cars from Penske for example – and you’ll realize what a declarative statement that really is.

We have no modern remembrances of what Rindt thought of the car, since he was killed at Monza in 1970. He is the only driver to ever be awarded the crown posthumously, and only drove the 72 in its early, more troubled stages. 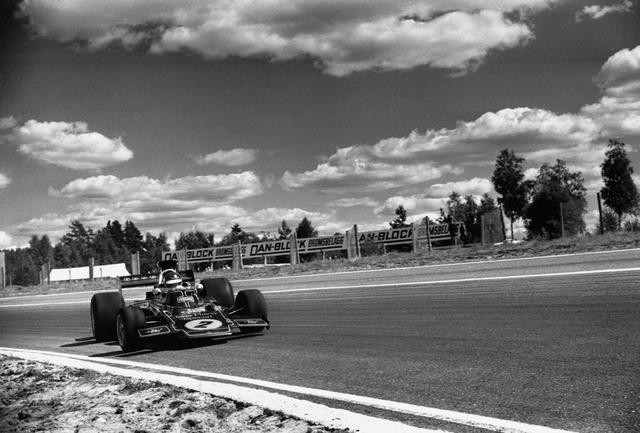 All of this is unblinkingly covered by Lyons, a writer well suited for his subject. Although American by birth, he spent most of his career at points continental, covering the Grand Prix scene for the likes of Autosport Magazine. To date, he has written 14 books and won numerous awards. As ever, his writing here is sharp, incisive, and often funny. He makes no bones about the Lotus 72 being his favorite car and it shows on every page.

And why wouldn’t it? The 72 was the first Lotus to wear the now iconic black and gold John Player Special livery. Everything about the car, from the “flying doorstop” shape to its elegant aerodynamic layout, right on through to that classy yet sinister and intimidating paint scheme said, “You boys are just arguing over second place.”

The Lotus 72 didn’t start out winning though. It was a real bear to get it all sorted – perhaps there was too much cutting edge stuff throughout the car? Thankfully, Lyons doesn’t shy away from those harsh facts. Lotus 72 is not a book of beatification and hagiography. Lyons goes into a good amount of detail detailing the car’s teething troubles along with its development woes.

Obsessive To The Core

The Lotus 72 was a particularly long-lived car, considering race cars now, generally speaking, have lifespans measured in months. The 72 won more Grand Prix races and World Championships than any other single Lotus, and dominated the scene from 1970 until 1975. One of the reasons for its longevity was Colin Chapman’s relentless push to develop every part of the car. Perhaps the most revolutionary thing about the 72 (and a revolution that continues to this day at Louts) was the “keep pushing” mantra. And I mean really keep pushing.

Chapman got a bee in his bonnet with the 72, constantly tweaking every system, sub-system, component, chassis geometry, aerodynamics, cooling, braking, everything, everything, everything. Luckily, for him and his drivers, the 72 was a solid platform from day one and took these refinements and improvements the way most of us take a pay raise. Sadly, if you were not driving a 72, your days were pretty dismal, always arguing over second place on back, living off the scraps Team Lotus decided not to wolf down.

Lotus 72 also documents the final days of the devil-may-care era of Grand Prix racing. This was the car Jackie Stewart raced against, and it was Stewart, first and foremost, that took on the flippant attitude towards “safety” at the time and made it into what we have today.

It’s not golf, but racing today is much, much safer than it was when the Lotus 72 was first drawn up. Look no further than the shot on the bottom of page 38 (and directly above). There’s “Black” Jack Brabham in one of his own cars, hot on the heels of Rindt in his Lotus 72 at Brands Hatch in England. And there, maybe three feet away from the cars is an unnamed press photographer, dropped on one knee, getting what has to be a magnificent shot. In the background, hundreds of spectators are separated from the track by only a berm and less than a hundred feet of air.

Where we are today is due in large part to what the Lotus 72 set in motion in 1970, and every mile is covered in great and very entertaining detail by Mr. Lyons. This book is not just highly recommended, it is a requirement for any racing fan and their collection.