"The Science of Supercars" is a thought-provoking observation of our dream car.

Images taken from The Science of Supercars: The Technology that Powers the Greatest Cars in the World, with permission from Firefly Books Ltd.

“Here,” in case you were wondering, is a place where things like the Bugatti Chiron and Koenigsegg Agera prowl the streets, let alone stuff like LaFerraris and Porsche 918s. It wasn’t all that long ago that a rather typical sports car – something like a 370Z or a Subaru BRZ – was considered well enough. What counts as a supercar these days would have counted as a race car engineer’s fever-dream just a few decades ago.

So, with that in mind, you might be asking how did we get here. Luckily enough, Martin Roach, Neil Waterman, and John Morrison have written The Science of Supercars to answer questions like that. And that’s a funny enough question to even pose, because, really, how did we get here?

A Better Way To Get Around

The Science of Supercars: For All Levels

A Better Way To Get Around

The Science of Supercars thankfully starts out at the very beginning, back when cars were literally a new idea over a century ago. Automotive designers like Karl Benz and Henry Ford didn’t start by saying, “We need a car that puts out over 1,000 horsepower, and has 18 radiators, all-wheel drive, and is made from composites!” No, back then, they just wanted a better way to get around than horse-drawn carriages.

In a lot of ways, the answer to “how we got here” is a simple and natural one: Engineers. See, engineers will go out and solve a problem, but then, 99.9 percent of them will not leave well enough alone. Oh no. Almost as soon as they are finished (and about half the time, even before they’re finished) a “normal” engineer is going to say, “I know how to make it better.”

That natural tendency of engineers is how an automaker’s response to a competitor usually becomes “We can do better than that!” And that’s how we get to the point of Chirons and LaFerraris. 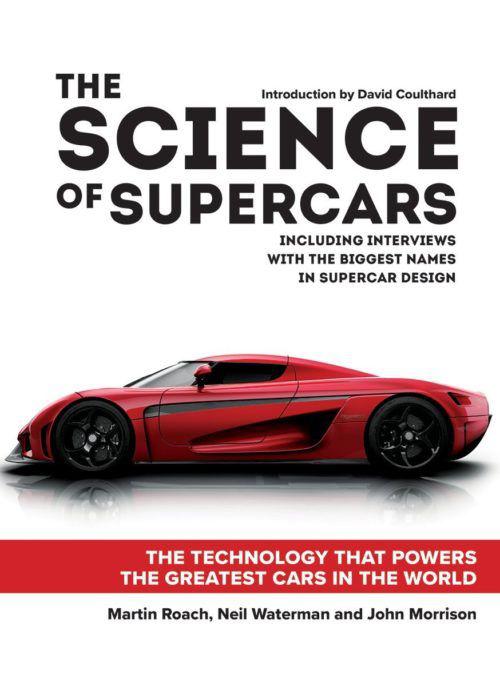 The Science of Supercars: For All Levels

Messrs. Roach, Waterman, and Morrison take us down this storied path, and they do a very good job of it. The Science of Supercars is neither tech heavy nor is it all a breathless history lesson. It’s a rather nice blend of both with integrated sidebars about certain bits of necessary tech information and racing know-how.

The Science of Supercars is nicely photographed and also nicely supplemented with technical drawings, showing off how various components and subsystems of these cars work. Sure, for a lot of us gearheads, this covers well-trodden ground. We know how the four-cycle

engine works, but if you’re new to this or it’s been a long time, it’s a welcome refresher. The Science of Supercars straddles a comfortable middle ground that works for readers of all levels of experience.

From The Science of Supercars: The Technology that Powers the Greatest Cars in the World, published by Firefly Books Ltd. Photo: Porsche AG.

The book plays out in a linear, chronological fashion. Car makers are just trying to get engines that’ll put out enough grunt, and the next thing you know, we’re deep into the woods about engine placement, polar moments of inertia, aerodynamics, semi-automatic gearboxes, turbos, hybrids, and even how fashion impacts a car’s design.

All of this follows with a smattering of interviews with the likes of Adrian Newey, legendary British Formula One engineer; Dr. Wolfgang Schrieber, Chief Engineer of the Bugatti Veyron; and Gordon Murray, designer of the McLaren F1.

In other words, The Science of Supercars is a good read. It will make a fine addition to your automotive library. And the book will help you understand how we went from horse and buggy, to the incredible machines contained within its pages.

1. The Thirst for Power: The internal combustion engine and the early days of speed. 2. Style Versus Substance: Next steps, and the birth of aerodynamics. 3. Emerging Technologies: The mechanics of war drive the birth of the supercar. 4. Configuration: The Miura, the E-Type and the dawn of the modern age. 5. The Science of Theater: Fashion and styling take center stage. 6. The Turbo Years: The Porsche Turbo and the rebirth of supercar science. 7. All-Wheel drive: Power or technology: how designers keep the cars on the road. 8. Composites: The McLaren F1 and its technological legacy. 9. Emerging Aero: Understanding the complex art of aerodynamics. 10. Going to the Opera: The remarkable science behind the Bugatti Veyron. 11. The Holy Trinity: Hybrid tech ushers in a new kind of supercar. 12. The Future: The technology on the verge of reshaping the landscape.

Martin Roach is a best-selling author of a number of high-profile books about supercars. Neil Waterman has spent 35 years working in the highest levels of Motorsport. John Morrison has over five decades of experience as a racing driver, including winning the Daytona 24 and competing in the Le Mans 24-Hour race.