Hyundai has just shown you the upcoming 2018 Sonata Hybrid, standard and plug-in versions at the Chicago Auto Show. Hyundai Motor seems to introduce new models or model improvements and updates every two weeks. How Hyundai can do this is beyond my understanding, but I'm glad they can keep it up. As I said, we now have two sonatas to view, hybrid and plug-in hybrid.

Of course, the new Sonatas come with a comprehensive exterior and interior redesign along with more safety stuff, better suspension, improved infotainment, and connectivity features, but the real star of the show is the gas/electric drivetrains

The center of the 2018 Sonata Hybrid is a 2.0-liter Nu GDI four-cylinder engine mated to a six-speed automatic transmission. Situated within the transmission is a 38 kW electric motor and clutch where the torque converter should be. Hyundai’s clever idea of putting the hybrid drive guts within the transmission – something they call a Transmission-Mounted Electrical Device (TMED) – works the same as any other hybrid, but with improved fuel economy via a larger electric motor. Plus, you’ve got to say that’s pretty smart packaging.

The traditional ICE part of the hybrid system produces 154 horsepower and 140 lb-ft. of torque. Add in the electric motor and you get a further 38 kW (51 horsepower) and another 151 lb-ft. of torque. Net power comes up at 193 horsepower at 6,000 rpm. Economy-wise, with a Sonata Hybrid SE you’ll get 39 mpg in the city, 45 on the highway, and a combined figure of 42. If you add that all up, you can go for around 650 miles under typical driving conditions. Choice!

The lithium-ion polymer battery pack capacity is good for 1.76 kWh and the whole she-bang fits under the trunk floor. Ergo, lots of trunk space, a flat trunk floor, and 60/40 split-folding rear seats. Total cargo volume for the Sonata Hybrid is 13.3 cubic feet. 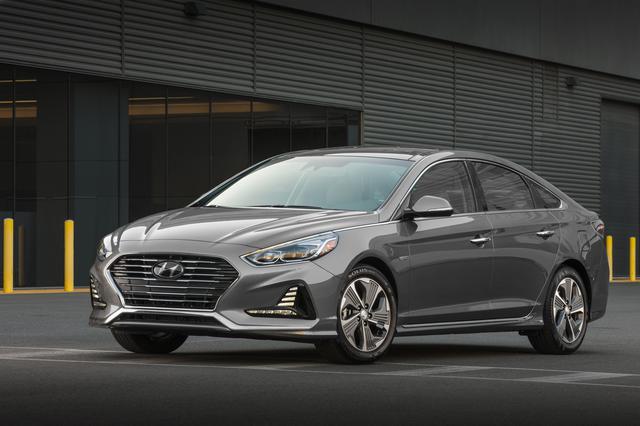 The Plug-in Hybrid is similar to the regular Sonata Hybrid, but with the benefit of extended all-electric travel. There’s a 9.8 kWh lithium-ion polymer battery pack which is more than five ti

mes larger than the Sonata Hybrid’s battery. According to the EPA, the Sonata Plug-in Hybrid has an all-electric range of 27 miles, and it can be recharged in less than three hours with a level-two charger. Which, if you think about this, allows you to commute to work, park the thing, plug it in for a recharge, and then drive it home without burning a drop of gas. And hey, if you’ve got to head out of town for a long weekend, you’ve got plenty of range thanks to the gasoline engine. Total estimated range is a remarkable 590 miles.

The Plug-in Hybrid has the same six-speed automatic with Hyundai’s TMED in place of the torque converter again, only this time the electric motor is a 50 kW beast. That 50 kW electric motor puts out 32 percent more power versus the Sonata Hybrid. The plug-in hybrid uses the same ICE as the Sonata Hybrid, and the total system output is 202 horsepower at 6,000 rpm. To compliment the performance, the chassis gets some nips and tucks with a stiffer front anti-roll bar and a more rigid rear trailing-arm design with retuned bushings.

The 2018 Sonata Hybrids will be produced in Asan, Korea. The Hybrid will be in Hyundai dealers by the first quarter of 2018 and Plug-ins will show up in the second quarter.

Bricks & Bones: The Endearing Legacy and Nitty-Gritty Phenomenon of The Indy 500, available in paperback or Kindle format.