I have never read 50 shades of gray. I am not saying that this is a terrible book-it is obviously a bestseller-I am just saying that I have never read it. This is not surprising, because pop culture usually passes by me at lightning speed. Just a few days ago, I learned the meaning of "Bye Felicia".

My friends laugh at my inability to understand even basic modern cultural nuances. Earlier this week, while traveling with a group of automotive industry colleagues, I was typing away on my laptop. As our rental minivan van went bouncing down the interstate, I was working.

They each insisted I take a vacation at once, saying I “don’t get out much.”

“True, but where would I go anyway,” I inquired.

“Somewhere, anywhere – just take a trip other than where we head for work,” one colleague replied.

And then, naturally, I thought of Tom Cotter.

50 Shades of Rust by Tom Cotter.

In this Book Garage series, we have featured both Barn Find Road Trip and Route 66 Barn Find Road Trip. In each book, Cotter takes off with his car guy buddies, traversing our great country in search of automotive treasures. These motoring archaeology quests have morphed into an entire lifestyle, complete with a genre of TV shows. Like I said, popular culture tends to be lost on me, but I am definitely familiar with the barn find movement.

There is no doubt Cotter is one of its defining figures. Now, we hit the road with him once again in 50 Shades of Rust. The book documents 90-plus of the most memorable barn find adventures and stories, complete with detailed photography.

This is the same 914 after removing lots of acorns and the mouse hotel, installing new rings, and doing a good compound and polish. Photo: John Forbes. 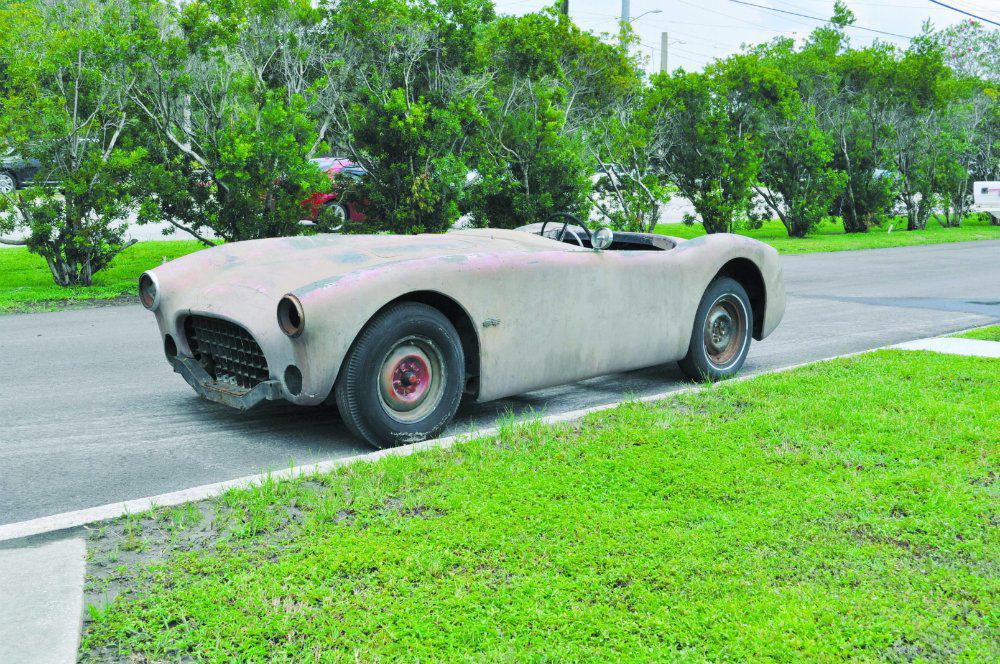 For the past 30 years, Cotter has worked on nearly every end of the car business: mechanic, sales, public relations, marketing executive, auto racing authority, historian, racer, collector, restorer, journalist, and author. Cotter teaches public relations at Belmont Abbey College, sits on the advisory board of McPherson College’s Auto Restoration program, and is a member of the Road Racing Driver’s Club.

This week, next week, the week after, and the week after that – in fact, for the foreseeable future, I am resolved to writing in the back of rental vans and in the lobbies of every hotel imaginable. Thanks to guys like Cotte

r, I have a new appreciation for working on the road – you never know who you will meet and what you will discover. 50 Shades of Rust: Barn Finds You Wish You’d Discovered is available through Amazon and Motorbooks.

50 Shades of Rust by Tom Cotter.

This is the same 914 after removing lots of acorns and the mouse hotel, installing new rings, and doing a good compound and polish. Photo: John Forbes.

In the process of researching Singer-derived specials, Hacker happened upon this 1952 Singer, the last racing Singer. Hacker (right) is posing with the car’s original builder/racer Ralph Bush. Photo: Geoff Hacker.

Having been driven and parked inside a metal building 20 years earlier, I was lucky enough to negotiate the purchase of this Mercedes 190 SL. It is similar to the very first sports car I rode in as a kindergartener. Photo: Tom Cotter.

The car was mechanically sound, but it now requires much metal work because of rust cancer. Luckily the purchase included all the metal repair panels. it is now undergoing restoration. Photo: Tom Cotter.

When discovered in a race trailer after many years, the Shelby Can Am was a neglected and forgotten racer that had been put away wet. In its day, however, the car could break its wheels loose in top gear! Photo: Bill Able Collection.

Lars Ekberg purchased an old drag car from his friend who told him it was a sister car to Bob Gliddon’s Mustang. Well, it was actually Don Nicholson’s Prostock mustang! Photo: Tom Cotter.

Ekberg’s plan is to restore the car to the gold and yellow paint scheme that Nicholson raced it in 1975. Photo: Tom Cotter.

A sad scene, for sure. This TVR Vixen had languished in the outdoors for many years before Goldstein was able to negotiate its purchase. surprisingly, with a new battery and some starter fluid, the engine fired to life! Photo: Mitch Goldstein.

Michael Blackburn didn’t want to buy the scooter, a 1958 Lambretta. but the “Guy Rule” dictated that he at least look at it before saying no. When he saw this wreck of a bike, he still managed to say, “Yes, I’ll take it.” Photo: Michael Blackburn.

He repaired the scooter with a "modern" British pattern and presented it to his wife Colleen as a surprise. It runs very well. Photo: Michael Blackburn.