From the Brabham days to the McLaren years, fans of Lauda will enjoy this book.

If you saw Ron Howard’s fantastic racing movie, Rush, you would have a pretty good idea about who Niki Lauda was. He was odd, driven, precise, unusual, relentless, meticulous in his racecraft, and idiosyncratic. He was also, at his heart, a racer, and a new book, Niki Lauda: His Competition History, looks at what made him what he was.

It’s easy to think Niki Lauda appeared on the scene like some fully-formed racing deity, a man/machine devoid of emotion but heaping with desire and skill. He was not that – okay, not entirely that. The most amazing thing Niki Lauda: His Competition History hits home, especially in its first pages, is how much Lauda was like you and me.

There are very, very few racing drivers, even champions, that hit the starting line as if they were some gift from above. The conventional wisdom is that they arrive upon this Earth already geniuses, gifted, and fast. The exact opposite is true 99 percent of the time.

All In a Day’s Work

Why We Love This Book

All In a Day’s Work

Like his competition, Lauda got to where he was the old fashion way: He worked his butt off. In this book of Lauda’s life, author Jon Saltinstall chronicles the long, hard slog to the top of the mountain. And I mean that literally. Saltinstall starts with Lauda’s first race, a 1968 hill climb in Austria where he ran in a Mini Cooper S, and goes until his final race, 316 contests later, at the 1985 Australian Grand Prix. Lauda’s career covered a dangerous era in racing, and Saltinstall goes to great lengths to show how Niki wasn’t a quitter. 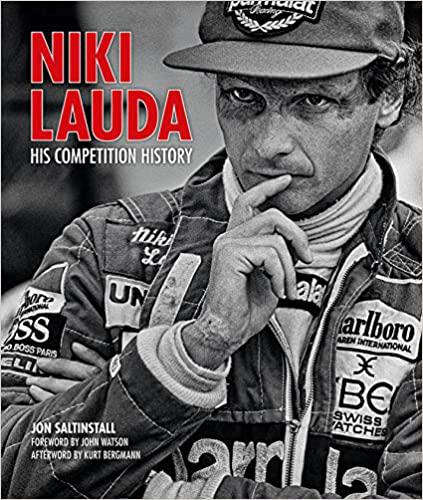 Niki Lauda: His Competition History would be a real grind of a book if Saltinstall had kept it to just a race by race report. Thankfully, he’s a more aware author than that! Saltinstall prefaces each racing year with a small preamble and brackets the entire book with explanations about what made Lauda race.

If that wasn’t enough, there is a forward from John Watson (former F1 driver and Lauda’

s teammate), a preface from esteemed journalist Doug Nye, and an afterword from Kurt Bergman. So the writing, even when it’s not Saltinstall’s, is all top-notch.

And the photos! Niki Lauda: His Competition History is dripping with fantastic photos, sometimes three or four to a page, almost all of them in color, and all of them new to me (which is hard to pull off).

In many ways, Niki Lauda: His Competition History works nicely as a slice through time, like a core sample taken from rock strata. Yes, it is most definitely the story of every race Niki Lauda ever ran, but it’s a look at how racing went from being an amateurish flirt with death to the professional, world-spanning sport we know today.

Indeed, Lauda himself can be seen as the inflection point where the “devil-may-care, who cares if I crash?” beginnings of racing were dropped in favor of a more mature and sober approach to safety. Those early notions, more or less, came to a flaming, grinding halt at the Nürburgring in August of 1976 after Niki lost it (or his car broke) and he nearly burned to death.

Why We Love This Book

Niki Lauda: His Competition History is a window into the man himself and a showcase of what racing was, and why it is now (thankfully) in the past. Although there are no deep dives into the philosophy of the whys and the wherefores, there’s enough information here to understand that before Niki, things were very different.

Then, of course, came Niki. And Saltinstall’s book demonstrates that on every page.

Jon Saltinstall grew up near Donington Park and witnessed his first race there after winning a ticket in a local newspaper race at the age of 12 competition. Already fascinated by the sport and its history, he is obsessed with pursuing his own interests while working in the banking industry. His admiration for Nicky Lauda led him to write this book nine years later, which was his first book. Saltinstall is married with two adult children and lives in Leicestershire, England.