During that time, Lauda was behind the wheel of the Brabham BT46B race car, a fan car that Gordon Murray built for the 1978 F1 season. The BT46B is the original fan car, and it won its first race at the Swedish Grand Prix, but it was also the last. Other teams swiftly filed a protest over the fan car’s legality, but we strongly feel that no one will dare oppose the magnificence of Prof. Murray’s latest track special.

“The T.50 is the ultimate road-going supercar, but I always dreamed of taking it one step further, to build a version that will deliver the on-track experience like no other car in history,” said Prof. Gordon Murray CBE, founder and CEO of Gordon Murray Automotive (GMA). “With the T.50, our target is to make the best driver’s car for the road. With the T.50s Niki Lauda, to make it the best driver’s car for the track.”

No Manual Stick, No Problem

The “regular” T.50 is an astonishing feat of engineering. It has a Cosworth-built naturally-aspirated 3.0-liter V12 pumping out 650 horsepower and 344 lb-ft. of torque, all while spinning to an unbelievable 12,100 rpm redline. As it turns out, those numbers are not enough for the T.50s Niki Lauda, so Prof. Murray wasted no time in tinkering with that glorious V12.

As expected, the result of all this engine wizardry is staggering. The GMA T.50s Niki Lauda has 725 horsepower and 357 lb-ft. of torque, an 11 percent and four percent improvement versus a standard T.50. With lighter cylinder heads and a deleted variable valve timing system, the new V12 engine is 35 lbs. lighter than before. And since most of the weight savings were removed from the engine’s top, the T.50s has a lower center of gravity than the road car.

No Manual Stick, No Problem

Admit it; no manual stick can compete with a modern automatic gearbox, no matter how fast or hard you crash through the gears. For this reason, the GMA T.50s Niki Lauda has ditched the standard six-speed manual in favor of a six-speed Xtrac gearbox with paddle shifters and a patented gear preselection system, sending power exclusively to the rear wheels.

Carbon fiber is at the heart of every performance car you see today. But in the GMA T.50s Niki Lauda, its carbon monocoque chassis is lighter still, created using a more lightweight layering technique. The body panels are also carbon fiber and are unique to the T.50s. The result is a track car that tips the scales at under 900 kg (less than 1,984 lbs.), lighter than a 1999 Honda S200 despite having a V12 engine. 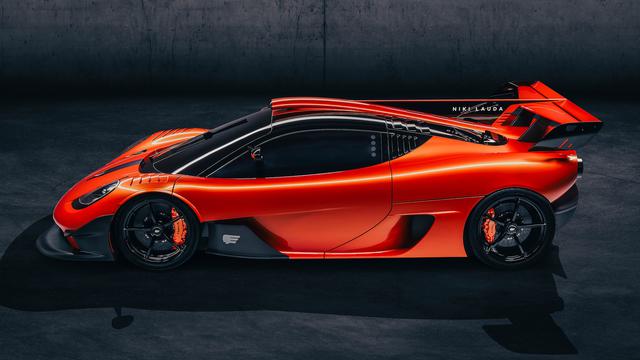 “The T.50s engineering team have done a fantastic job with lightweighting

The GMA T.50s Niki Lauda generates around 50 percent more downforce than a hardcore McLaren Senna GTR, and it does it by employing both old-school and modern techniques. The T.50s produces no less than 3,300 lbs. of downforce at full chat using its plethora of aero goodies.

There’s a massive splitter with a central airfoil producing downforce at the front, while the diffusers behind the front wheels create more downward pressure. Meanwhile, the front fender vents release air pressure generated inside the wheel wells, while the LMP1-inspired fin running from the roof-mounted ram intake to the rear spoiler improves high-speed stability.

The delta-shaped rear wing is similar to the front wing of Nelson Piquet’s Brabham BT54 F1 car. That massive rear spoiler has a slotted flap like an airplane’s wings to either offer more rear downforce or to balance the downward pressure at speed.

Of course, we can’t talk about the T.50 or T.50s without mentioning that massive fan at the rear. Measuring 15.7 inches and spinning at 7,000 rpm upon reaching ground speeds up to 50 mph, the fan works in conjunction with that enormous rear diffuser to ensure the car sticks like glue to the road. Unlike a standard T.50, the s version has a single downforce mode to ensure maximum grip.

The GMA T.50s Niki Lauda has the same forged aluminum multilink suspension as the road car, albeit with custom coil springs, shock absorbers, and a stiffer anti-roll bar. It now sits 3.4 inches (front) and 4.6 inches (rear) closer to the ground. It also shares the Brembo six-piston front and four-piston rear brakes as the T.50.

We don’t know, and it seems Prof. Murray has no answer, either. “We have no interest in achieving the ultimate lap time or creating an over-downforced spaceship at the expense of driver involvement because ultimately you have to possess an F1 driver’s level of skill and fitness to get the best out of them,” he said.

As a substitute, Prof. Murray fixated on the prerequisites of what makes a track car great. “I laid out some parameters to create the ultimate driver’s car and experience on track: a central driving position, a V12 just behind your ear revving to over 12,000 rpm, downforce limited to 1500kg (3,300 lbs.), and a weight of under 900 kg,” he continued. “Plus, the ability to turn up at any track, make a few basic checks, and have fun, without the need for an entire support crew.”

Production for the GMA T.50s Niki Lauda will begin near the end of 2021 at GMA’s manufacturing facility in Surrey, United Kingdom. GMA is only making 25 examples of the T.50s Niki Lauda, with base prices starting at around $4.3 million, plus taxes.

The price includes refueling equipment, a complete tool kit, a set of jacks, technician training, and a free track day session with a GMA test driver. Trust us when we say you’ll need the latter for a car like the T.50s.