John Hennessey just did a very serious thing. The Texas automaker and the incredibly powerful (but thoroughly designed) viper, pickup truck, etc. have just launched his Hennessy Venom F5. As the successor to the already very effective Hennessy Venom, if the numbers show up, F5 will be an amazing performer.

“The Venom F5 is engineered to be an unrivaled ‘decathlete’ among hypercars,” Hennessey said, who oversaw all aspects of the development. “This car will handle superbly, quality is exceptional, there are more than 3,000 bespoke parts, materials are exquisite, and everything is a fitting tribute to 30 years of the Hennessey brand.”

The main numbers break down like this: 1,817 horsepower, 1,193 lb-ft. of torque, and an all-up weight of 2,998 lbs. That translates into a zero to 62 mph time of less than three seconds, zero to 124 mph in under five seconds, and a targeted top speed in excess of 311 mph. That should be the whole story right there. That should leave any thinking human shaking their head as the possibilities fully sink into their consciousness, but of course, there’s more.

The one instantly obvious thing is how this is not some garage special. Sure, it’s a Hennessey, and they don’t do stuff like that in general. But, in this day and age, “I made the fastest car in the world,” builders seem to be a dime a dozen. They’re like crabgrass, springing up everywhere with crazy claims, wacky high-performance numbers, and questionable build quality. Oh, that’s just a computer rendering. You haven’t actually built the car yet? Because you’re waiting for funding (of course)? And you need to finalize that agreement with XYZ Euro engine supplier (natch)? Sigh.

The Hennessey Venom F5 is not that. It’s not even close.

Everything, okay, mostly everything, is all designed and built in-house down in Sealy, Texas. The first-gen Venom was, more or less, built on a modified Lotus Elite chassis and body. Not the F5. The carbon fiber chassis was designed this time by Hennessey. The same goes for the carbon fiber bodywork. Suspension, seats, sub-panels, everything, the whole shootin’ match was conceived, designed, and built by some very clever guys in a state best known for BBQ, Stevie Ray Vaughan, and fervent gun ownership.

And that firearms knowledge paid off. By coating the engine bay cover, rear deck, and the exhaust system in Cerakote, a ceramic-polymer treatment, the impact of heat on each part can be reduced. Cerakote is often applied to gun barrels to protect against heat and wear.

The only bit that’s not 100 percent in-house is the engine. The architecture is sort of based on a Chevy V8, but that’s like saying the aluminum alloy used on the space shuttle is the same kind of material found in a beer can. It’s technically accurate but also utterly misses the point of the Hennessey Venom F5. 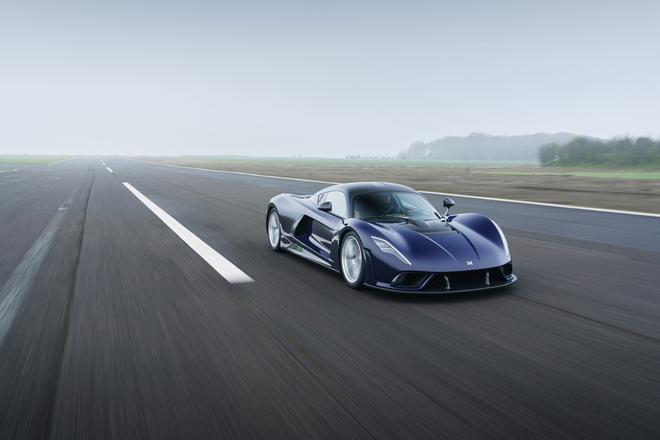 The point here is that the Fury (that’s the engine’s name) is a mid-mounted 6.6-liter twin-turbo V8 cranking out 277 horsepower per liter. That exceptionally high

How? It’s not that the Hennessey Venom F5 is so powerful (even if it is), it’s that it’s so light. A Bugatti Divo weighs around 4,300 lbs. A Koenigsegg Regera tips the scales at a healthy 3,600 lbs., and that’s considered a lightweight. The Hennessey Venom F5 weighs 2,998 lbs., with the engine accounting for 617 lbs. of the total weight, which is not much heavier than a friggin Miata!

And all this tech is wrapped in a not unattractive body. The Hennessey Venom F5 is mildly generic in appearance, but it doesn’t look like a kit car with pretensions. It’s actually quite subtle. There’s not a giant wing hanging out the back, no splitter as big as a dinner table protruding from the front, it’s all low and somewhat swoopy with carved character lines here and there as needed. It’s not shockingly attractive, but it’s not childishly designed either. It should age well, let’s just put it that way.

Molding the carbon fiber interior and exterior parts required more than 600 separate bespoke pieces of tooling over a three-year process. Carbon fiber treatments include the structural tub, body panels, doors, door sills, and the steering wheel, inspired by both an airplane yoke and an F1 car.

The Hennessey Venom F5 will be limited to just 24 units worldwide, with a $2.1 million base price. Yes, that is a lot of money, but how much does a Bugatti cost again? A LaFerrari? A McLaren Senna? And unlike those cars, Hennessey insists the Venom F5 will be much more user friendly. The tires off the rack are Michelin Pilot Sport Cups. Not cheap, but readily available. What does it take to get new tires for a Bugatti? Are they still going for $45K a set?

The F5 is said to be “everyday usable,” meaning you can drive it around town and not fear stuff like speed bumps and parking lots. Throttle response is smooth and tractable, according to Hennessey. This is not some half-put-together garage special that goes from five horsepower to 5,000 in a quarter-inch of throttle throw. This is not some track special with a license plate pop-riveted onto the back that sounds and feels like you’re inside an oil drum being rolled down a hill.

The Hennessey Venom F5 is a serious everyday-drivable hypercar that should genuinely worry the big boys.