June 2015 Automobile Sales Report-Which manufacturers are among the best?

Ford Motor Company, General Motors and Fiat Chrysler Automobiles all increased their sales last month. Each manufacturer has seen an increase in demand for its models and overall sales.

Mercedes-Benz, Kia Motors, and Hyundai all saw record sales too, while Mazda logged their best June in 13 years.

Despite an increase of $3,600 higher than last year, the all-new F-150 is still turning twice as fast on dealer lots than the industry average for half-ton pickups.

Ford SUV sales were up 10 percent year over year, marking the best June since 2002. Sales of the new Explorer totaled 20,377 – an increase of 30 percent versus a year ago. Sales of the all-new Edge also increased 30 percent in June versus last year, with 12,587 units sold.

Edge continues to turn quickly on dealer lots – at just 15 days – while the new Explorer is turning in just seven days.

With the advent of summer weather, sales of the Ford Mustang jumped too, up 54 percent with 11,719 units moved.

Chevrolet, Buick, GMC, and Cadillac delivered 259,353 vehicles combined in the U.S. last month, helping make the best June for GM since 2007. Sales to commercial customers, and state and local government fleets increased too.

Most of the truck market share gain comes from the ongoing success of the Chevrolet Silverado and GMC Sierra full-size pickups, which were redesigned for the 2014 model year. Since calendar year 2013, GM’s retail share of the segment has grown 0.9 percentage points to 38 percent.

Lat month, Chevrolet pickup deliveries were up 33 percent – Silverado was up 18 percent. Colorado sales reached 6,558 units, the best since June 2007. It remains one of America’s fastest selling pickups with an average of 15 days on the lot.

GMC pickup deliveries were up 37 percent – Sierra up 21 percent and deliveries of the new Canyon totaled 2,532. GMC overall has grown its retail sales for 17 consecutive months.

For Buick and Cadillac, the winners were the Encore and SRX, up 22 and 45 percent respectively. 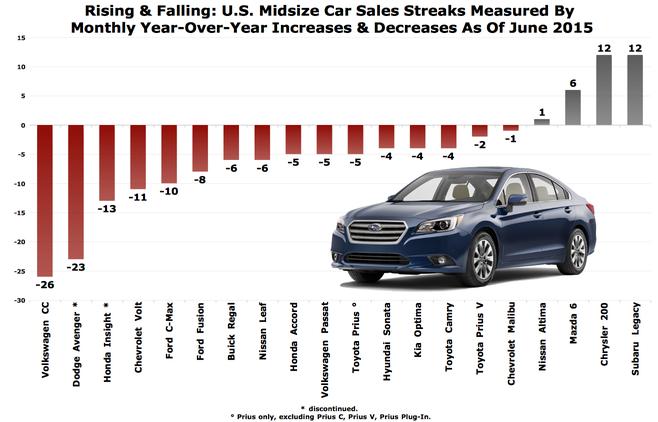 The Chrysler brand’s 28 percent increase was the largest sales gain of any FCA US brand during the month, helping extended year-over-year sales gains to 63-consecutive months.

The Chrysler 200 posted the largest percentage increase of any FCA US vehicle last month. The 200 jumped 153 percent for its best June sales ever, while the 300 rose 11 percent in its best June since 2013.

The Dodge Journey also recorded its best monthly sales ever, while the Jeep Wrangler, Cherokee, and Patriot logged their best June sales ever.

Ram trucks were up 1 percent last month, the best June sales in 11 years.

Kia Motors America logged their best ever June sales with 54,137 vehicles, making for their greatest first-half performance in company history. With more than 300,000 vehicles sold in six months, Kia is up 4.6 percent year-to-date.

The Mercedes-Benz brand was led by the C, E, and M-Class models.

Hyundai Motor America reported June sales of 67,502 units. Although only up less than one percent, it was enough to create an all time best June in sales for the manufacturer. Year-to-date sales of 371,150 represents a 2 percent increase and marks Hyundai’s best half year opening ever.

Elantra sales rose 55 percent for the month, marking its best ever June. The Santa Fe logged 10,446, up 17 percent and Sonata Hybrid saw the best June ever with 2,334 units, up 53 percent over last year.

Nissan saw U.S. sales for June rise to 124,228 units, an increase of 13.3 percent and a June record for the manufacturer. Helping drive the strong finish were sales of Nissan crossovers, trucks, and SUVs, up 30.3 percent for a June record

It also set the best Mazda 6 sales in 10 years.