Home > Truck > No fluff or stuffing: The 24 Hours of War provides facts

No fluff or stuffing: The 24 Hours of War provides facts

Where To See It

Consider this interesting fact: The 24 Hour War is one hour and 39 minutes long, roughly one hour shorter than Ford v Ferrari. And even though The 24 Hour War is shorter, the makers of this historical documentary put out more information, in a much, much more compelling way; and they did it in less time than Damon, Bale, and Mangold & company.

The Ford and Ferrari rivalry at Le Mans is still one of the most famous battles in racing history. It started in 1963 when Henry Ford II tried to buy Ferrari, beholders of the most successful racing team in the world at that time. Negotiations stalled, Ferrari backed out, and Henry Ford II took it personally. From there, the stage was forever set for the Ford versus Ferrari battle that ultimately went down in June of 1966 during the 24 Hours of Le Mans.

Ford would finish 1-2-3 at Le Mans that year and sweep the podium.

The 24 Hour War Has a Stellar Cast

Unlike Ford v Ferrari, which only covers about a two year time span, The 24 Hour War starts at the beginning of the lives of both of its protagonists. It begins with Henry Ford winning his first race to put Ford Motor Company on the map, and with Enzo Ferrari growing up in a machine shop, a young boy obsessed with cars and racing from birth. 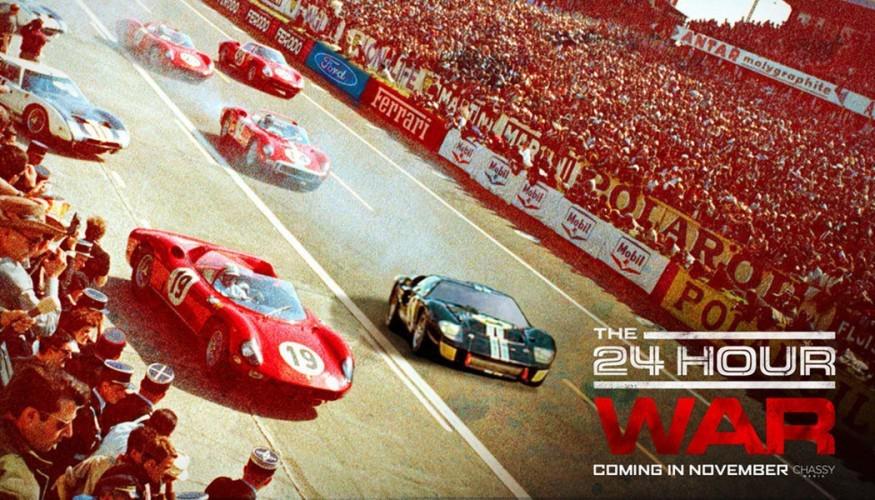 This is ambitious because it’s a long way from the topic of the film. With the famous battles between the industrial might of Ford, against the racing knowledge and success of Ferrari more than half a century away, this is a lot of ground to cover. Yet directors Adam Carolla and Nate Adams seem to do it effortlessly. The 24 Hour War conveys just what needs to be expressed about the personalities involved, and most importantly why they were involved.

Especially of note was the decision to talk with drivers, most importantly David Hobbs and Dan Gurney. Like all drivers, they are forthright with their judgment on what went down and why. Although not delved into with any appreciable amount of time, Hobbs does hit on the salient point of Ford’s victory at Le Mans: Displacement. He adroitly points out that Ford’s answer to not getting the Mark I to work was both simple and positively American: stuff in a bigger engine! Which is just what Ford did, going with a big block 427 in the Mark II over the Mark I’s 289.

Nobody mentions that Ferrari was only running a four-liter engine, either in the film or seemingly ever in discussions about the Ford and Ferrari wars of the mid-century, but it alw

ays seemed relevant to me.

There’s also a lovely bit with Hobbs talking about how the GT40 was his favorite car of all time. Not just because it was fast, which it most definitely is, but because it was reliable and easy to drive. If America gets anywhere in the world, it always seems to come down to that: ease and reliability. Perhaps our country’s biggest asset is pragmatism, and that is handily pointed out by our racing exploits.

The great Dan Gurney gets in a few gems as well concerning the Mark IV. Like how the brakes were not up to the job of full application at the end of the Mulsanne Straight, so he’d back off waaaaay before he could have, lap after lap, just to save the brakes – and then telling this to his co-driver, A.J. Foyt, because Gurney knew Foyt would cook the brakes if he let him drive it normally.

The 24 Hour War Has a Stellar Cast

Indeed the raft of interviewees is simply stellar. In addition to Gurney and Hobbs, Shelby is there along with Piero Ferrari (Enzo’s surviving son); older Italian combatants John Surtees, Charlie Agapiou, and Mario Andretti join the fold; A.J. Baime, author of the book Go Like Hell which Ford v Ferrari is based on, is also there. Finally, Bob Bondurant, Peter Brock, Edsel Ford II, Henry Ford, Mauro Forghieri, Allen Grant, and even Lee Holman all make appearances.

Perhaps the most interesting facet of this film is who made it: Adam Carolla. You know, the guy from The Man Show and the comic relief for Loveline with Dr. Drew. Sure, he’s a born and bread gearhead, having made a wonderful biopic about Paul Newman and owning more than a few very interesting cars. However, Carolla is, or can be – well, how can I put this delicately – frankly, he’s kind of a meathead.

He comes across like a frat boy with only a blunt understanding of the world and lacking in nuance. Yet The 24 Hour War is just that: sharp and full of nuanced perspectives utterly absent in Ford v Ferrari with all its inflated drama and ham-fisted story telling. Carolla and Adams did it in far less time and with zero filler, zero enhancements, zero deviations, and zero lies.

The 24 Hour War is just the straight story of one of the most interesting times in all of racing. The 24 Hour War is a much, much better film than Ford v Ferrari and something every racing fan will enjoy watching.