Rezvani Hercules 6×6: Jonah Ryan, your car is ready to wait

Rezvani Hercules
ZTSG 03/08/2022 Truck 96
The world of premium supercars is very crowded. You have your Paganis and your Koenigseggs and so on. You also have Rezvani, the Beast manufacturer in Orange County. After Rezvani went further with th...

The world of premium supercars is very crowded. You have your Paganis and your Koenigseggs and so on. You also have Rezvani, the Beast manufacturer in Orange County. After Rezvani went further with their Tank SUV, they decided to increase their craziness by about 150% by launching the Hercules 6×6.

What Is The Rezvani Hercules 6×6?

A Bridge Too Far?

Hard To Justify This Rig

What Is The Rezvani Hercules 6×6?

Yes, 6×6. It has six wheels! It’s sort of like a bespoke, American-made version of those Mercedes G-Wagen 6x6es they sold to sheiks about a decade ago. Rezvani says the Hercules 6×6 is designed as an antidote to the currently dull truck segment, but I don’t see trucks as all that dull. Regardless, the Rezvani Hercules 6×6 is a military-inspired, purpose-built, extreme utility vehicle.

Rezvani says it’s perfect for numerous far-ranging adventures, whether it’s going to Rodeo Drive to pick up your artisanal sock garters or all the way out to Rancho Cordova to check on your horse breeding program.

Rezvani is also working on a Hercules 6×6 Military Edition with features like bulletproof glass, body armor, and over 20 high-tech security features. Currently, Rezvani has a Military Edition for their Tank SUV which features things like electrified door handles, gas masks, and special ram bumpers.

A Bridge Too Far?

The Hercules 6×6 is rather conventional, from an engineering perspective. There’s a steel body-on-frame construction, and the suspension system uses FOX racing components. Aside from that, Rezvani hasn’t released any other details (not even a hint at what the engine might be). 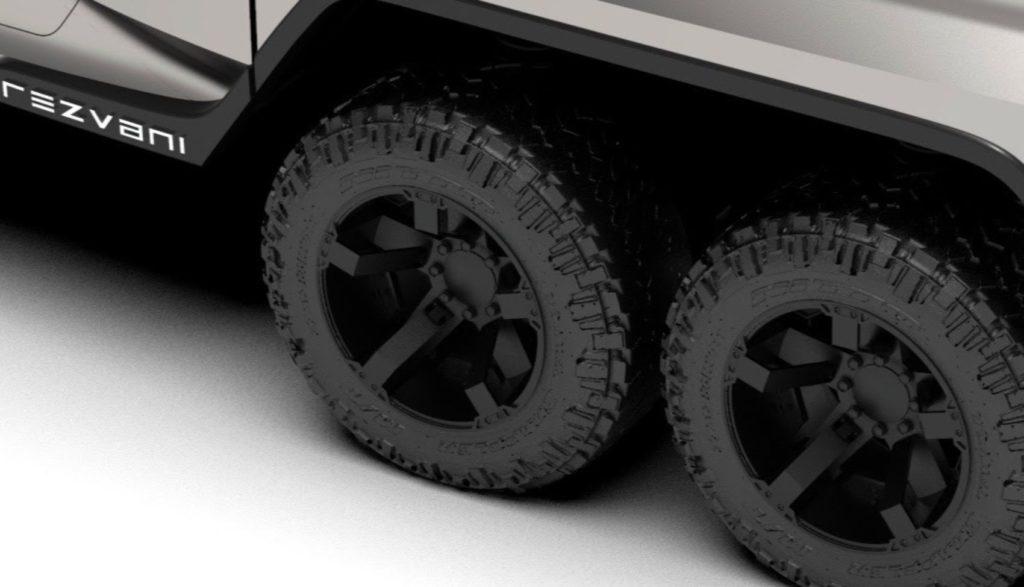 Rezvani CEO Ferris Rezvani uses words like “rugged” and “muscular” and “well proportioned” and “as exciting to the eyes as it is to drive” to describe the Hercules 6×6. This is about where I started laughing so hard I had to take a break; because I was thinking more along the lines of overblown, useless, pretentious, and a magnet for justifiable vandalism.

The Rezvani Hercules 6×6 raises a whole bunch of questions. Preeminent for me is, who on Earth needs something like this? Did some cigar-sucking Jonah Ryan wannabe say, “No, I need a huge truck with six wheels!” And did Rezvani find enough of them to justify the series production of the Hercules 6×6? I guess so, but I’d honestly be surprised if they sell more than a handful.

Because that’s my other question: How could you possibly use something like the Hercules 6×6?

Hard To Justify This Rig

It seems too big and cumbersome for serious off-roading, nor will it be cheap. No one in their right mind will be bashing through the forests primeval in a Hercules 6×6. Need to run down to the grocery store to get some milk and eggs? Sure, just take a vehicle slightly smaller than an A1 Abrams tank. I bet it’ll be a breeze to park. Are you going to commute in it? Pick up your kids from soccer?

No. The answer to all those questions is no.

You’re gonna buy a Hercules 6×6 because you need people to look at you! Somehow, somewhere along the way of your emotional “development,” things go a little bit, well, off. And now you have to be paid attention to, don’t you? You think that Patrick Bateman is a model of style. You look at The Wolf of Wall Street as a “How To” manual. And you look at the Rezvani Hercules 6×6 and think, “That’s my ride!”

The new Rezvani Hercules 6×6 will make its debut this summer with deliveries following shortly after that. If you think it’s the vehicle for you, then plunk down a $266 refundable deposit on Rezvani’s homepage. Doing so will get you details and exclusive pictures of the Rezvani Hercules 6×6. As of right now, Rezvani makes no mention on their website regarding the total MSRP for the Hercules 6×6.