Corvette 2022 Stingray Chevy IMSA
ZTSG 28/11/2021 Coupe 207
It's never a good idea to stand still, even if your laurels are as groundbreaking and impressive as the new mid-engine Corvette. In 2022, the latest C8 Vette will receive a new special edition, as wel...

It's never a good idea to stand still, even if your laurels are as groundbreaking and impressive as the new mid-engine Corvette. In 2022, the latest C8 Vette will receive a new special edition, as well as new exterior colors and spoiler options. Of course, this is all part of Chevrolet's efforts to "improve the variety" of the mid-engine Vette.

On the inside, the Strike Yellow and Sky Cool Gray cabin mimic the exterior yellow and gray theme. There are standard GT2 seats along with yellow seat belts and a C8.R Special Edition numbered plaque. If you want to go a little more hardcore, Competition Sport seats are available. Each car comes with a custom-fitted indoor cover depicting the appearance of the Corvette C8.R race car. 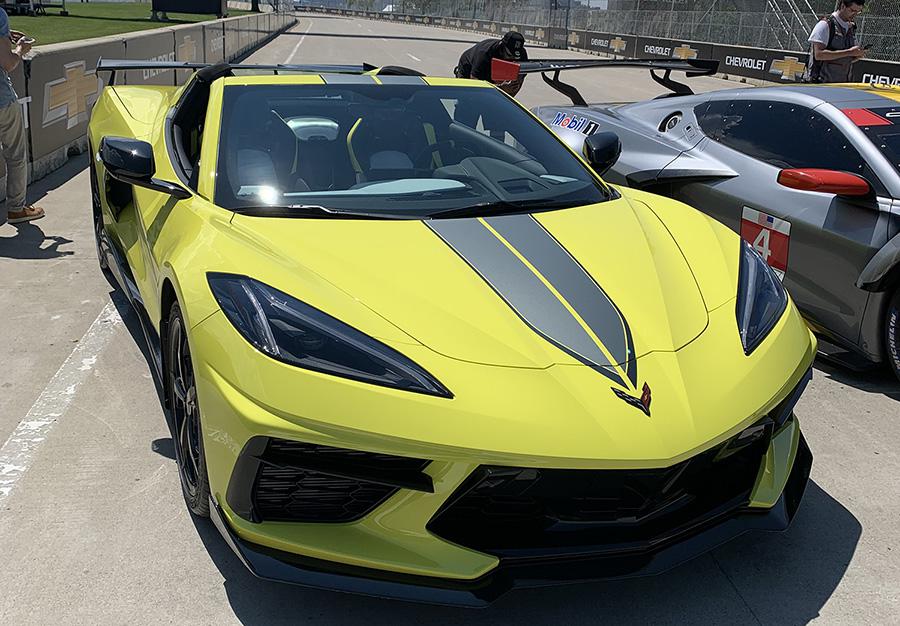 Best of all, the IMSA GTLM Championship Edition package starts at a not all that expensive $6,595. That’s a pretty cheap upgrade when you consider Chevy is only making 1,000 of these guys.

What about the “regular” Corvettes, you ask? In addition to the IMSA GTLM Championship Edition, the 2022 Corvette Stingray lineup gets three new exterior colors: Hypersonic Gray, Caffeine, and Amplify Orange Tintcoat. There’

s also a new low-profile rear spoiler, while the Z51 front splitter will be offered on non-Z51 models.

The Stingray’s LT2 6.2L V8 engine gets an upgraded direct injection system and improved engine calibrations. The Active Fuel Management system now provides “extended range.” However, Chevy did not say precisely how much fuel economy improves with the change. For 2022, the Corvette Stingray is still rated at 490 horsepower (or 495 horsepower with the available performance exhaust system). The Z51-equipped Stingray is capable of a very impressive zero to 60 mph time of 2.9 seconds.

All coupe models include a removable roof panel that stores in the rear trunk and convertibles include a power-retractable hardtop. And, somehow, the C8 is practical with dual cargo compartments offering a total of 12.6 cubic feet of cargo volume. Yes, the trunk in the back is large enough for two sets of golf clubs. No really. Next time you get a look at a C8, check out that trunk. I bet you could get four soft-sided carry-on bags back there. Along with the front trunk (frunk?), this makes the C8 a lead pipe cinch as a great weekend trip car.

The 2022 Corvette Stingray starts at $62,195 for coupe models, including destination and freight charges. Convertibles start at $69,695, which also includes the destination and freight charges. Yeah, by the time you add on all the performance goodies, those prices will be but a memory, but still, I’ve seen these things loaded going for less than six figures, so it’s still a bargain. Honestly, Porsche 911 Turbo beating performance for half the price, what’s not to love?

If you want to take the plunge and finally get your dream Corvette, our free and easy search tool* will help. That will show you which Chevy dealers in your area offer the best prices on new Corvettes.

*Although you are always free, Automoblog and its partners may receive commissions when you use this link.