McLaren 1995 Gooding amp Company
ZTSG 05/09/2021 Coupe 165
In the words of Samuel Jackson in Jurassic Park: Grab your ass! There are two reasons: this 1995 McLaren F1 road car set a record at auction. Despite its age, it is still very fast!Record BreakerOne o...

In the words of Samuel Jackson in Jurassic Park: Grab your ass! There are two reasons: this 1995 McLaren F1 road car set a record at auction. Despite its age, it is still very fast!

One of a Kind

The 1995 McLaren F1 road car, pictured in the gallery above, set a record auction price of $20.465 million during the Gooding & Company’s Pebble Beach Auction on Friday night, August 13th, 2021. Described as a time capsule, this 1995 F1 surpassed the previous record for a McLaren F1 road car ($15.62 million set in 2017). Likewise, this 1995 F1 exceeded another, more recent McLaren example. That example, converted at the McLaren Special Operations Woking factory to an ultra-rare LM specification, sold for $19.8 million in 2019.

One of a Kind

oad cars were manufactured between 1992 and 1998, and only 64 were actually completed to original, street-legal specifications. The 1995 example pictured here is number 25 of 106, but the only one finished in this particular exterior color. The color is named after Creighton Brown, one of the executives who played a pivotal role in establishing the fledgling McLaren Cars company. Light tan and Brazilian brown leather upholstery decorate the inside of the three-seater cockpit. 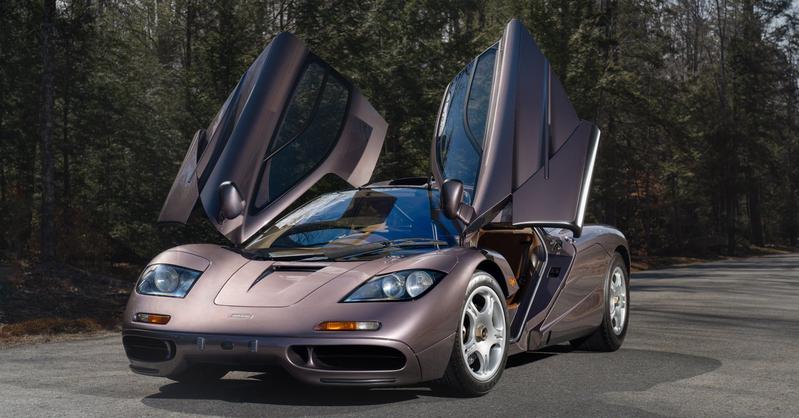 “We were incredibly proud to present this exceptional McLaren F1, and tonight, the market confirmed the sheer prowess of this unparalleled supercar from one of the most legendary names in motoring,” said David Gooding, President and Founder of Gooding & Company. “This sale was a historic moment not only for Gooding & Company, but for the McLaren legacy and the entire industry as a whole.”

This 1995 McLaren F1 Road Car – also known as Chassis 029 – was part of a private Japanese collection rarely seen in public.