Lotus E-R9: Will this radical design research become a reality by 2030?

Lotus racing car Mans best
ZTSG 25/02/2022 New energy 230
I swear, when I first saw the Lotus E-R9, I said to Carl (from Automoblog in Detroit): "Someone at Lotus played too much Gran Turismo." I really did Think that Lotus is making a purely digital concept...

I swear, when I first saw the Lotus E-R9, I said to Carl (from Automoblog in Detroit): "Someone at Lotus played too much Gran Turismo." I really did Think that Lotus is making a purely digital concept car that you can "drive" in PlayStation games.

But no, the Lotus E-R9 is serious. Or at least a serious look at what a near-future EV-powered Le Mans racer could be. According to Lotus, the E-R9 is a design study for a pure electric racer that could be on the starting grid of racing circuits worldwide for the 2030 season.

Only a Matter of Time

Only Time Will Tell

Only a Matter of Time

The world’s automakers are grokking to the fact that EVs are going to happen. The available science shows the ICE-powered car will have to be phased out and replaced with, well, something. And right now, EVs are our best bet. More so than most carmakers, Lotus understands that the best way to prove a concept is to race it, which leads to the E-R9.

The fact it’s fueled by electrons is only the start of the high-tech sorcery involved in the E-R9. Get this: According to Richard Hill, chief aerodynamicist for Lotus, the E-R9 is “partly driven like a car and partly flown like a fighter jet.” No, he’s not kidding.

The active aero package includes “morphing” body panels and aerodynamic control surfaces that bend, deflect, and twist to aid the Lotus E-R9 in all sorts of interesting ways. On top of that, the EV powertrain has the same torque-vectoring system from the Lotus Evija, but it’s even further developed to be driver-adaptable on the move.

I’ve got to say the Lotus E-R9 looks fantastic and fantastically futuristic with its silky fighter jet body. Developed by Lotus Engineering (not the race or production car end of things), the E-R9 was created as a technology showcase of “its philosophy, capability and innovative spirit in the fields of advanced electrified powertrains and aerodynamics.” 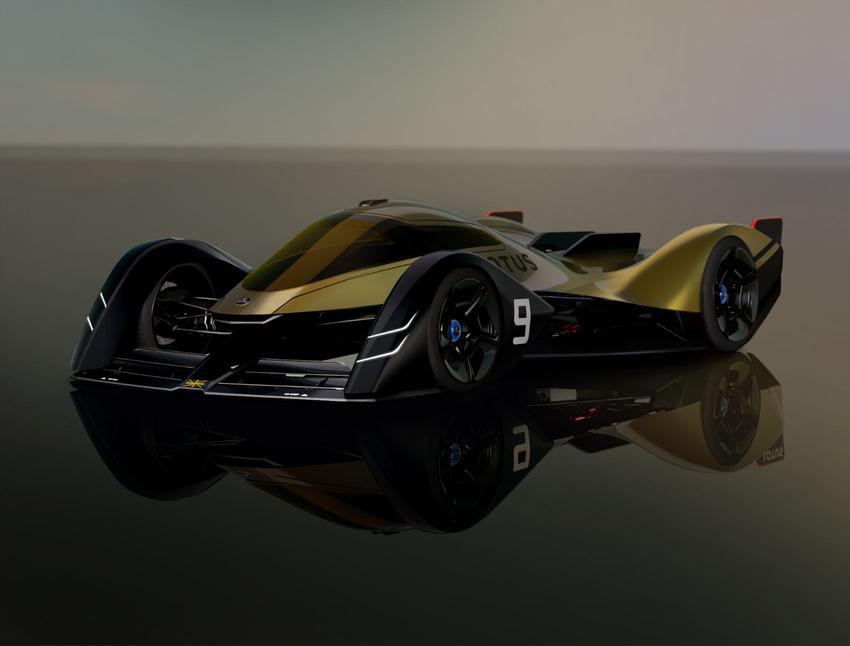 The E-R, as you might have guessed, stands for Endurance Racer. And that, of course, is the best racing crucible for developing road-going innovations (okay, maybe in rallying too). If you build a car that can run literally all day at places like Le Mans and Daytona, you can also make one that can drop off the kids, swing by the grocery store, and then park at the office. The “9” part, in case you’re wondering, refers to the Lotus Mark IX that race

For the moment, let’s ignore that active (i.e. moving) aero surfaces are banned in racing because this is cool stuff. For a start, there are the “morphing” body panels. Located across the delta-wing profile, the active surfaces can change their shape and attitude to the airflow, either at the press of a button or automatically according to sensor inputs. This allows minimum drag on the straights and maximum downforce in the corners.

That’s not all, however. There are vertical control surfaces at the rear that generate aerodynamic forces to help the car change direction. Yes, it’s a Pandora’s Box, but it would be fun to see what a car could do without any aero regulations.

The advanced electric drivetrain powers each wheel independently and is further enhanced with a torque-vectoring system. The torque-vectoring system can shunt that power side to side, corner to corner, and front to back to help with things like slowing, steering, and accelerating. Lotus says the E-R9’s system is an expansion of the Evija electric hypercar, but the E-R9 would be fully adjustable, by the driver, on the move.

Range, you might be wondering? Yes, if you think about running a Tesla at Le Mans all day and night, it gets comical pretty quick. But Louis Kerr, principal platform engineer on the Lotus Evija, has commented: “Battery energy density and power density are developing significantly year on year. Before 2030, we’ll have mixed cell chemistry batteries that give the best of both worlds, as well as the ability to ‘hot-swap’ batteries during pit stops.”

Sounds good. Even if Lotus is really just saying “We’ll worry about that later.”

Only Time Will Tell

What Lotus has here is no crazier than flying race cars. In other words, the Lotus E-R9 could work, fancy aero bits and all.

And it would be fun to see a whole grid full of these, along with entries from Ferrari and Porsche and Peugeot and the whole gang at Le Mans in the next 10 years. After all, racing improves the breed. And if we’re going to make EVs work, racing them is the best way to do that.