The third time is the charm of the American car manufacturer SSC (formerly Shelby SuperCars). After a controversial speeding race in Las Vegas, Nevada last October, the Tuatara is now officially the fastest production car in the world. This time it is true, SSC has all the relevant data to support it.

In its first run, the SSC Tuatara had an average two-way speed of 316.11 mph (508.73 kph), faster than the Bugatti Veyron 16.4 Super Sport, Koenigsegg Agera RS, and SSC’s Ultimate Aero TT. The latter broke the existing speed record by averaging 256.18 mph (412.28 kph) before Bugatti and Koenigsegg crashed the party.

How Fast Is The SSC Tuatara?

Ticking All The Right Boxes

Can You Buy The SSC Tuatara?

How Fast Is The SSC Tuatara?

Very. Before officially reclaiming the fastest production car record, SSC made a second record attempt at the end of 2020. It failed due to engine issues. SSC returned on January 17th of this year to reclaim the crown by averaging a two-way speed of 282.9 mph (455.3 kph).

Mind you, the numbers are not as mind-blowing as the initial Vegas run, and it’s nowhere close to the Bugatti Chiron’s unofficial speed record of 305 mph at Ehra-Lessien. However, it’s enough to surpass the Koenigsegg Agera RS and its 277.87 mph speed record in 2017. Unless Bugatti attempts a second run, the SSC Tuatara is now the fastest car in the world.

We were ecstatic when SSC broke the elusive 310 mph (500 kph) barrier during its scandalous first run, but the carmaker only had 2.3 miles of road to cover in its third attempt. In theory, the Tuatara could have gone faster given a longer stretch of road, but we have no doubt the carmaker will be back to move the goalpost even further.

“America’s new claim to victory in the ‘land-based space race’ is going to be tough to beat,” said SSC CEO Jerold Shelby during its first speed run, and it remains true today.

The initial record-breaking speed run took place on a seven-mile stretch of public road on State Route 160 near Pahrump, Nevada. For its third official run, SSC went to the Johnny Bohmer Proving Grounds at the Kennedy Space Center in Florida. And instead of commissioning professional racing driver Oliver Webb to pilot the car, SSC made a bold decision by allowing Larry Caplin, the actual test vehicle owner, and a non-professional racecar driver, to attempt the speed run.

Using lessons learned from its first attempt, SSC went to Racelogic USA to witness, verify, and certify the run. In fact, Jim Lau, Technical Director of Racelogic USA, personally installed the Racelogic VBOX 3i 100Hz GNSS system inside the Tuatara to record and verify the time data. Simultaneously, video evidence is gathered by a VBOX Video HD2 recorder to film the entire event. 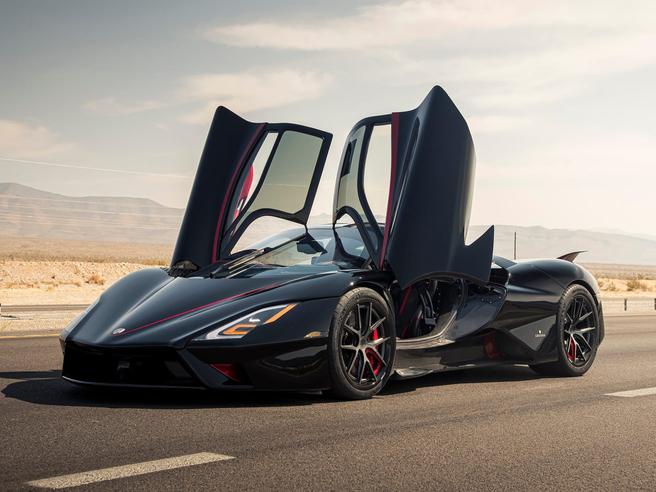 But to claim the top speed record, the Tuatara had to finish two consecutive runs in opposite directions, something which Bugatti failed to do last year. It’s also the reason why the Chiron Super Sport 300+ was not officially recognized as the fastest production vehicle in the world in 2019, even after reaching an astonishing top speed of 304.773 mph (490.48 kph) at VW’s Ehra-Lessien private test track.

The SSC Tuatara had a maximum speed of 279.7 mph (450.1 kph) in its first northbound attempt. Less than an hour after its first run, Larry Caplin and his personal SSC Tuatara sped towards history by reaching a mind-blowing top speed of 286.1 mph (460.4 kph). After doing the math, the SSC Tuatara officially claimed the fastest production vehicle speed record by recording an average two-way speed of 282.9 mph.

Ticking All The Right Boxes

Breaking the production top speed record is not as easy as it sounds. It’s more than just showing up with an angry supercar on a deserted highway and hitting the gas pedal. The SSC Tuatara had to abide by some rules, which are the following:

Rule 1: The car should be a production vehicle and identical to the vehicle a customer might purchase. SSC delivered its first production Tuatara in February 2020, right before the COVID-19 pandemic reared its ugly head. Check.

Rule 2: The vehicle should be driven the same route in opposite directions and average the two speeds. According to officials, this accounts for winds and road grade that may have favoured the vehicle as it travels in one direction. Check.

Rule 3: Although the Bonneville Salt Flats might come to mind, when trying to set the kind of record the SSC Tuatara was after, the vehicle must be driven on a public road and not on a runway or racetrack. Check.

Rule 4: The vehicle speed should be tracked by a certified GPS measurement system and have two world-record sanctioned witnesses on-site for verification. Check and check.

Rule 5: The car should run on street tires, and the engine should run using regular non-race fuel. Check.

The SSC Tuatara became the fastest production car without a gargantuan, force-fed W16 motor. Instead, it has a twin-turbocharged 5.9-liter V8 engine co-developed by SSC and Nelson Racing Engines. According to SSC, the engine produces 1,350 horsepower using regular 91 octane juice.

Feed it with E85 gasoline, however, and you have an incredible 1,750 horsepower at your disposal. All those stampeding horses are fed to the rear wheels via a CIMA seven-speed semi-automatic transmission.

But it’s not just about power. The SSC Tuatara has a carbon-fiber monocoque chassis. All told, it only weighs 2,750 lbs., and the slippery body has a drag coefficient of 0.279 Cd, which makes it like a dolphin swimming in the ocean. The SSC Tuatara’s curvy body is courtesy of world-renowned automotive designer Jason Castriota of Castriota Design, the man responsible for styling the Ferrari 599 GTB Fiorano and Maserati Gran Turismo.

Can You Buy The SSC Tuatara?

In truth, the SSC Tuatara is a bargain at around $1.3 million to $1.9 million, especially considering SSC is only making 100 units for worldwide consumption. It has proven what it can do given an empty stretch of road, and we have a feeling SSC intends to repeat that again to try and break even more records.