Kia PHEV Sorento 2022 amp
ZTSG 31/08/2021 Suv 363
The 2022 Kia Sorento PHEV kicked off a crossover party with its sporty plug-in hybrid system and three rows of seats. The latest Sorento PHEV is different from any mid-size crossover. When it arrives...

The 2022 Kia Sorento PHEV kicked off a crossover party with its sporty plug-in hybrid system and three rows of seats. The latest Sorento PHEV is different from any mid-size crossover. When it arrives at US dealerships this fall, the Sorento PHEV will be the only car of its kind with standard three-row seats (Chrysler Pacifica Hybrid is its closest competitor, but Pacifica is a minivan, not an SUV).

Furthermore, the newest Sorento PHEV offers up to 32 miles of all-electric range. It’s not exactly a deal-breaker since the Toyota RAV4 Prime delivers 42 miles of electric range, but the Toyota only has two rows of seats.

Besides wearing new Kia badges, the 2022 Sorento PHEV is packing a plug-in-hybrid powertrain shared with the Hyundai Santa Fe PHEV. It has a 1.6-liter turbocharged four-cylinder gasoline engine pumping out 177 horsepower and 195 lb-ft. of torque. It also has a single electric motor churning out 84 horsepower and 224.2 lb-ft. of torque. The latter arrives from zero to 2,100 rpm, making Sorento PHEV a sprightly daily driver in all-electric mode. The motor draws power from a 13.8 kWh battery pack.

All told, Sorento PHEV has a combined 261 horsepower, more than enough for a midsize crossover. However, it’s not enough to run circles around the Toyota RAV4 Prime, which has 302 horsepower and can go from zero to 60 mph in under six seconds.

But since the fourth-gen Sorento has a 1.4-inch longer wheelbase and is 10 mm longer than its predecessor, the PHEV version now has more room to accommodate six passengers with standard captain’s chairs in the second row and a foldable third row. The Kia Sorento PHEV has up to 143.8 cubic feet (4,072 liters) of passenger space and 12.6 to 75.5 cubic feet of cargo room if you fold the third and second-row seats. Those are best-in-class numbers for a midsize crossover.

“The Sorento PHEV’s rare combination of drivability, efficiency, and spaciousness will make it a compelling choice for our customers,” said Sean Yoon, President & CEO, Kia North America and Kia America.

In addition, Sorento PHEV has a standard torque-vectoring all-wheel drivetrain with a center locking differential for better traction and grip during the winter or rainy season. The hybrid system sends power to all four wheels via a six-speed automatic gearbox with paddle shifters. 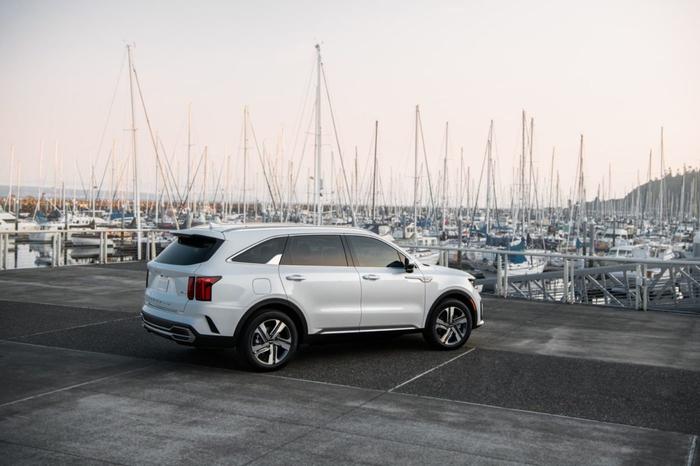 According to Kia and based on their testing, the Sorento PHEV is targeting a combined MPGe figure of 79, along with 34 mpg in hybrid mode, and a combined overall range of 460 miles. The numbers are slightly better than the Hyundai Santa Fe PHEV with the same hybrid powertrain. However, these are only Kia’s estimates. Official EPA figures are forthcoming.

The 2022 Kia Sorento PHEV is brimming with advanced tech features. It has a 10.25-inch touchscreen infotainment system with navigation and UVO link, Sirius XM, wireless charging, push-button start, eight USB charging ports, an available Bose audio system with up to 12 speakers, and a digital instrument cluster.

Every new Kia comes with a bumper-to-bumper warranty of five years, or 60,000 miles, along with a 10-year, 100,000-mile powertrain warranty. Although the length of Kia’s warranty is one of the best on the market, there are certain situations where it might be a good idea to extend that warranty. See this helpful guide to Kia’s factory warranty before making any decisions.

The 2022 Kia Sorento PHEV is available in two trim versions: SX and SX-P. Production is at Kia’s Hwasung plant in South Korea. Pricing remains forthcoming, but the first deliveries will arrive at Kia dealerships this fall. Kia claims Sorento PHEV is eligible for up to $6,587 in federal tax credits and other state incentives.

When it comes to getting the best price on any new Kia SUV, we trust Rydeshopper, a free and neutral third-party search site* that lets you see dealer inventory in your area. Rydeshopper will help you compare prices and see which dealers are offering the best discounts and incentives.

*Although it is always free for you, Automoblog and its partners may receive commissions when you use the services provided through this link.